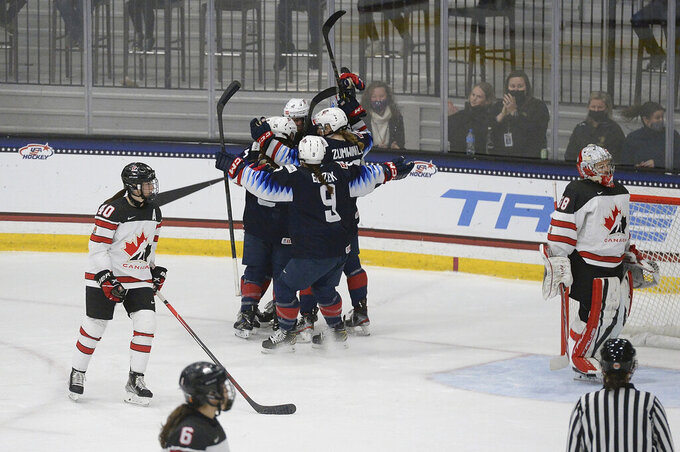 Members of Team USA celebrate a goal during the third period of a women's exhibition hockey game ahead of the Beijing Olympics, Friday, Dec. 17, 2021, in Maryland Heights, Mo. (AP Photo/Michael Thomas)

MINNEAPOLIS (AP) — Hilary Knight was selected for a USA Hockey record-tying fourth Olympics, one of 15 players with prior Winter Games experience on the U.S. women’s national team seeking to defend its gold medal in Beijing next month.

The final 23-player roster was announced Saturday night at the second intermission of the NHL's Winter Classic game in Minneapolis, where the players stood on mini-rinks next to the main ice for an introduction to the crowd at Target Field. Six players on the team are Minnesota natives.

“You look at stats alone, she’s the most decorated player for our sport, from the U.S. side, anyway,” teammate Brianna Decker said in a recent interview with The Associated Press. “But you look at how much she’s done off the ice as far as growing the game and being that image and being that figure for young girls to look up to, it’s incredible.”

Decker and fellow forwards Kendall Coyne Schofield and Amanda Kessel and defenseman Lee Stecklein were all named to their third Olympic team.

The other returners from 2018 are defenseman Cayla Barnes, forward Hannah Brandt, forward Dani Cameranesi, goalie Alex Cavallini, goalie Nicole Hensley, defenseman Megan Keller, forward Kelly Pannek and goalie Maddie Rooney, who has rejoined the team after being sidelined by an injury that kept her out of the world championships last summer. Defenseman Megan Bozek and forward Alex Carpenter were on the 2014 team.

“The women in that room are incredible, and it’s intoxicating in a way. You just want to be a part of it,” Knight told The AP in October.

Harvey, who just turned 19 in October, has been groomed to lead the power play. She made her national team debut in August at the world championships and scored against Japan in the quarterfinal round.

The most notable player left off the list was defenseman Kali Flanagan, who played in all five games in South Korea. Twin sisters and key members of the 2018 team Monique Lamoureux and Jocelyne Lamoureux have retired, as have Meghan Duggan and Gigi Marvin.

The team is coached by Joel Johnson, who replaced Bob Corkum in April. Johnson also recently took over as the women's coach at the University of St. Thomas in Minnesota, which made the jump to the NCAA Division I level this season.

The U.S. team beat Canada 3-2 in a shootout to win the 2018 gold, after the Canadians had won the previous four Olympic tournaments.

"The players have consistently worked hard and battled through adversity in the last three months, and we’re confident in the talent and energy they bring to the ice as we look to take home gold in Beijing,” general manager Katie Million said in a statement distributed by USA Hockey.

Team USA opens the Beijing Games on Feb. 3 against Finland in group play.