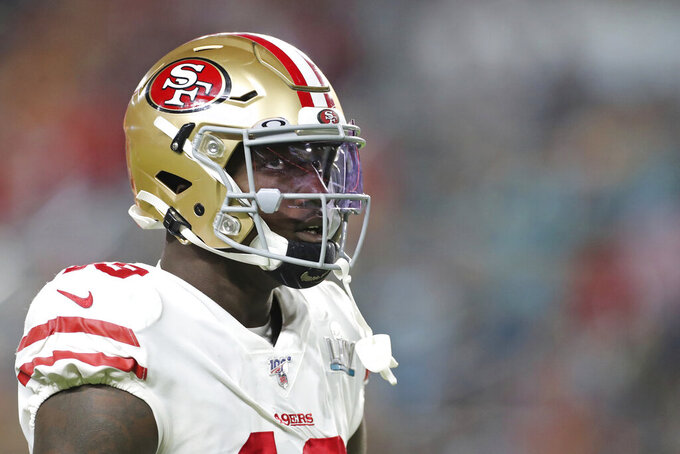 The 49ers confirmed a report from NFL Network that Samuel suffered a Jones Fracture, which is a break between the base and the middle part of the fifth metatarsal in his foot. The team says it will have a better idea of Samuel’s timetable to return once he arrives at training camp next month.

Samuel tweeted that he will be back and better than before in 10 weeks. That would give him a little more than two weeks to get ready for the scheduled season opener on Sept. 13 against Arizona.

The Niners lost receiver Trent Taylor for the season last year after he needed a second operation and got an infection that required more surgeries.

Samuel had been one of several 49ers players working out this week in Nashville as NFL facilities remain closed to players because of the COVID-19 pandemic.

Samuel is being counted on to be a key part of the offense for the defending NFC champion 49ers. San Francisco lost receiver Emmanuel Sanders in free agency and was hoping Samuel could help fill that role in his second season in the NFL following a promising debut season after being picked in the second round out of South Carolina.

Samuel caught 57 passes for 802 yards and three TDs last season and also made big contributions in the running game. He had 14 carries for 159 yards and three scores. Samuel had 575 yards receiving over the final eight weeks of the regular season, ranking second to Tennessee’s A.J. Brown among rookies in that span.

Samuel then made a big impact in the postseason with 10 catches for 127 yards and six runs for 102 yards in three games. He had five catches for 39 yards and three carries for 53 yards in San Francisco’s 31-20 loss to Kansas City in the Super Bowl.