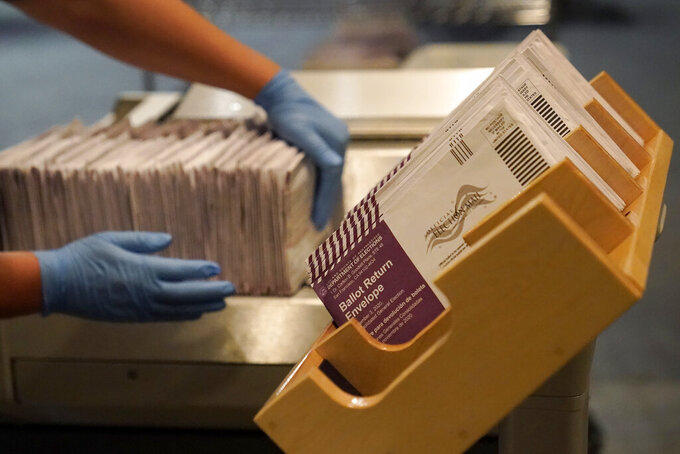 Election Day is finally upon us.

Or at least what we still call Election Day, since more than 93 million Americans have already cast ballots in an election that has been reshaped by the worst pandemic in more than a century, its economic fallout and a long-simmering reckoning with systemic racism.

Here are some key questions we are considering as the final votes are cast and counted:

WHAT DO AMERICANS WANT FROM A PRESIDENT?

Elections are always about where Americans want to steer the country. That's especially true this year as the U.S. confronts multiple crises and is choosing between two candidates with very different visions for the future.

President Donald Trump has downplayed the coronavirus outbreak even as cases surge across the U.S. He has panned governors — virtually all Democrats — who have imposed restrictions designed to prevent the spread of the disease. And he has bucked public health guidelines by holding his signature campaign rallies featuring crowds of supporters — often unmasked — packed shoulder to shoulder.

His Democratic rival, Joe Biden, has said he'd heed the advice of scientists. He's pledged to work with state and local officials across the country to push mask mandates and has called on Congress to pass a sweeping response package.

Trump casts protests of systemic racism as radical and has emphasized a “law and order” message to appeal to his largely white base. Biden acknowledges systemic racism, picked the first Black woman to appear on a major party's presidential ticket and has positioned himself as a unifying figure.

The candidates also hold distinctly different views on everything from climate change and the environment to taxes and the scope of federal regulation.

The two parties took wildly different approaches to contacting voters amid the pandemic.

The GOP can point to success in increasing their voter registration in battleground states. Democrats can point to their early voting success, including from notable slices of new voters. But only the final tally will vindicate one strategy or the other.

WILL VOTING BE PEACEFUL?

Each major party can install official poll watchers at precincts. It's the first time in decades Republicans could use the practice after the expiration of a court order limiting their activities. So it's an open question how aggressive those official poll watchers will be in monitoring voters Tuesday or even challenging eligibility.

The bigger issue is likely to be unofficial “poll watchers” — especially self-declared militias. Voter intimidation is illegal, but Trump, in the Sept. 29 presidential debate, notably refused to state plainly that he’d accept election results and instead said he is “urging my supporters to go into the polls and watch very carefully, because that’s what has to happen. I am urging them to do it.”

In Michigan, where federal authorities recently arrested members of anti-government paramilitary groups in an alleged plot to kidnap Democratic Gov. Gretchen Whitmer, the Democratic secretary of state tried to impose a ban on carrying firearms openly at a polling place. A Michigan judge struck down the order.

WHITHER THE EXURBS AND SMALLER CITIES?

Trump’s reelection depends on driving up his margins in rural areas and smaller towns and cities — those expansive swaths of red on the county-by-county results map from 2016.

But acres don’t vote, people do, and Biden is casting a wide demographic and geographic net. His ideal coalition is anchored in metro areas, but he hopes to improve Democratic turnout among nonwhite voters and college-educated voters across the map.

There are places where the competing strategies overlap: exurban counties — those communities on the edges of the large metropolitan footprints — and counties anchored by smaller stand-alone cities.

Two potential indicators that could have close-to-complete unofficial returns sooner than later and portend broader results:

FORSYTH COUNTY, GEORGIA — Part of metro Atlanta’s growing, diversifying northern ring. Republican Mitt Romney won 80% of 81,900 votes in 2012, while Trump’s share dropped to 70% of nearly 99,000 votes in 2016. If that trendline continues, it would signal first that GOP-controlled Georgia is indeed a tossup. More broadly, it would suggest Trump’s suburban-exurban problems are real.

The president’s allies pointed to 1968, when widespread unrest amid the Vietnam War, general social upheaval and the assassinations of Martin Luther King Jr. and Robert F. Kennedy benefited Republican Richard Nixon as he built his “silent majority.” But Nixon wasn’t the incumbent in 1968. In fact, the political atmosphere was so bad for President Lyndon Johnson that the Democrat didn’t seek reelection.

Many Democrats and some Republicans are now pointing more at 1980, when Republican Ronald Reagan trounced President Jimmy Carter and the GOP flipped a whopping 12 Democratic Senate seats. Trump’s standing in the polls over 2020 has tracked only slightly above where Carter spent much of the 1980 election year, as he battled inflation, high unemployment and the Iran hostage crisis. But what appeared a tight race on paper as late as October turned into a rout. Even Democratic heavyweights like Indiana Sen. Birch Bayh and South Dakota Sen. George McGovern, once a presidential nominee, fell.

It’s a more polarized era four decades later. But the lesson is that Trump would defy history to win reelection amid such a cascade of crises and voter dissatisfaction.

WHEN WILL THE RACE BE CALLED?

Absentee voting amid coronavirus has changed the vote-counting timeline, and there aren’t uniform practices for counting those ballots. That makes it difficult to predict when certain key battlegrounds, much less a national result, could be called.

For example, Pennsylvania and Michigan — battlegrounds Trump won by less than 1 percentage point in 2016 — aren’t expected to have complete-but-unofficial totals for days. Florida and North Carolina, meanwhile, began processing early ballots ahead of time, with officials there forecasting earlier unofficial returns. But those two states also could have razor-thin margins.

Early returns, meanwhile, could show divergent results. Biden’s expected to lead comfortably among early voters, for example. Trump is likely to counter with a lead among Election Day voters. Depending on which counties report which batch of votes first, perennially close states could tempt eager partisans to reach conclusions that aren’t necessarily accurate.