'60 Minutes' keeps on the news and is rewarded by viewers 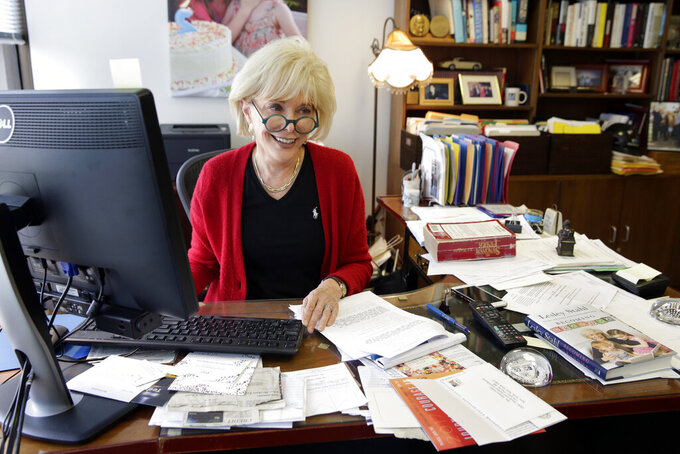 FILE - "60 Minutes" correspondent Lesley Stahl, poses for a photo in her office at the "60 Minutes" offices, in New York on Sept. 12, 2017. CBS' pioneering newsmagazine is consistently one of the most-watched programs on television and its viewership is up 9 percent over last year, the Nielsen company said. That's not only more than any other prime-time program on ABC, CBS, NBC and Fox, it's also one of only four on those networks to show a year-to-year increase. (AP Photo/Richard Drew, File)

NEW YORK (AP) — One of television's hottest shows is also among its oldest.

It's not the first time that's been said about “60 Minutes” since its 1968 debut. In the frenzied news year of 2020, however, the success is a tribute to both durability and adaptability.

CBS' pioneering newsmagazine is consistently one of the most-watched programs on television and its viewership is up 9% over last year, the Nielsen company said. That's more than any other prime-time program on ABC, CBS, NBC and Fox, and also one of only four to show a year-to-year increase.

All that, and a well-publicized dust-up with President Donald Trump, too.

After executive producer Bill Owens turned the show primarily over to COVID-19 coverage last spring, “60 Minutes” has returned to its traditional format while being focused on being timely.

“We're being encouraged, and we do, to look for stories that relate to the week,” said veteran correspondent Lesley Stahl. "Certainly for the last few years, every week has been unpredictable. You have to be prepared to jump.

“It's part of the reason that we have continued to be successful, and continue to get a new stream of young people to come in and watch,” she said. “I also think that people find a certain kind of comfort in the fact that we do it in the same way we've always done it. It looks the same, the sensibility is the same, the DNA is the same.”

Anderson Cooper's report on lingering COVID-19 symptoms received a strong response this fall, and there have been other pandemic-related stories about vaccine development and problems producing protective equipment. Reporters almost always return from coronavirus stories with ideas for others, Owens said.

That has encouraged profiles of Jerry Seinfeld, Viola Davis, David Attenborough and Ken Burns to be mixed in with stories on autism, a growing grizzly bear population and a striking Scott Pelley piece on churches hewn into rock in Ethiopia.

“In this newsiest of years, it's fitting that ‘60 Minutes’ became even more responsive to the headlines,” said Andrew Heyward, former CBS News president and now research professor at Arizona State's Walter Cronkite School of Journalism and Mass Communication.

Original executive producer Don Hewitt often ran “60 Minutes” as an island unto itself. His replacement, Jeff Fager, pushed the broadcast to be more responsive to the news and Owens has emphasized it even more over the past nine months.

The show's ticking stopwatch has never changed, and Stahl is a living link to late reporters Mike Wallace, Morley Safer, Ed Bradley and Bob Simon. Yet it's noteworthy how “60 Minutes” has maintained momentum while turning to a new generation of reporters like Pelley, Cooper, Bill Whitaker and Jon Wertheim, Heyward said.

“The key to the program's success is really smart story selection, really deep research and really good reporters and producers out there doing the work,” he said.

While Trump's ongoing effort to stay in office was addressed in the Krebs interview, Owens said he's chosen not to give additional oxygen to the story.

Stahl's off-the-rails interview with the president will likely be the season's most-remembered moment. Trump became disgusted with Stahl's questioning and cut things short.

“I've had people say to me, ‘He set you up. He planned that,’” Stahl said. “I am absolutely positive that that's not the case. It happened organically in the room.”

Owens said “60 Minutes” has had a decent professional relationship with Trump, who gave Stahl his first interview as president-elect in 2016. But this time, “there was a different feeling in the room from the moment we walked in.”

He said he confronted a press representative when he saw Trump's team was preparing to videotape the interview, reminding them of an agreement not to use the material. When Trump threatened to release the unedited tapes, Owens protested and tried to stop it.

The White House went ahead anyway, allowing outsiders a rare opportunity to see how the show crafted raw material into a finished, edited piece. Like the interview itself, that ultimately proved unremarkable.

“I was heartened — not surprised, but heartened — that we had almost no criticism over our editing, which people thought was fair,” Stahl said. “That was pleasing. But I knew it would be fair. We're always fair.”

Owens said that “we didn't feel good that we were unable to deliver a more fulsome interview. But it also wasn't of our own choosing.”

How about going back, and offering Trump the first TV interview of his post-presidency?

“I haven't given that much thought,” Owens said. “I have a feeling we wouldn't be his first shot.”

Stahl, too, has moved on. She's preparing for an interview with House Speaker Nancy Pelosi.

Stahl said she's completely healed from her own rough bout with COVID-19 last spring. That contrasts with her husband, who had a relatively mild case, but still feels lingering symptoms, she said.

Her experience hasn't had much impact on her work, both physically and in influencing the types of stories she wants to do, she said. She does feel a connection to stories about health care workers, because she's seen how hard they work.

“One person who took care of me said — when I got better — that I was the first person she had taken care of who hadn't died,” she said.