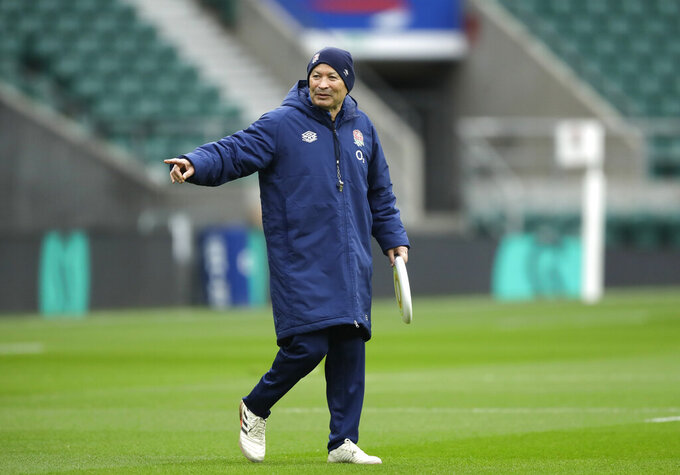 England coach Eddie Jones gestures holding a frisbee during an England rugby team training session at Twickenham in London, Saturday, Oct.17, 2020. England are preparing for a series of matches including the finish of the Six Nations championship which was interrupted earlier in the year because of the coronavirus outbreak. (AP Photo/Matt Dunham, Pool)

In a breakthrough season in top-tier rugby, Jacob Umaga has been putting tries on a plate for his teammates at English club Wasps.

Now, England coach Eddie Jones is hoping the 22-year-old flyhalf from a star-studded rugby family can serve up a treat at international level, too.

The nephew of former All Blacks captain Tana Umaga and the son of ex-Samoa international Mike Umaga, Jacob is in line to make his debut for England against Italy on Saturday in the final round of the pandemic-extended Six Nations.

Jones sees special traits in Umaga — the way he reads the game, the way he attacks space, the way he tackles — and cannot wait to find out how the No. 10 transitions to international rugby after just one season in the English Premiership.

“No. 10s are like sushi chefs,” Jones said, as he discussed Umaga in a video call on Monday. “With sushi chefs, you have a lifetime ambition to be good. It generally takes 10 years before you can start making sushi. And No. 10s are the same.

Umaga is one of just two flyhalves alongside captain Owen Farrell to be picked in a 36-man England squad announced Monday.

And with the other No. 10, George Ford, unavailable for the match in Rome as he recovers from an Achilles injury, the 22-year-old Umaga is likely to feature in the match in Rome — most likely from the bench but potentially in the starting XV if Farrell is selected in the centers.

There’d be pressure on Umaga, too. England could win the Six Nations tournament for the first time since 2017 with a bonus-point victory, though the result of the France-Ireland match being played later Saturday will have a bearing on where the title goes.

Umaga, however, has taken everything in his stride in a stunning and rapid rise to the top of the game.

He was born in England — his parents moved here in 1995 so that his father could play rugby league for Halifax in the north of the country — and lived up to his family’s rugby heritage by joining Leicester Tigers’ academy before signing for Wasps in 2016.

Umaga, whose father’s cousin is the late New Zealand flanker Jerry Collins, played for England's Under-18 and Under-20 teams and was called up to the senior England camp in January for the start of the Six Nations after just four starts for Wasps in his first season in the English Premiership.

He didn’t make any of England’s first four matchday squads before the Six Nations was suspended because of the coronavirus outbreak, but has remained on Jones’ radar and shone since the restart of domestic competition in August.

On Saturday, Umaga scored a try for Wasps in their loss to Exeter in the Premiership final, breaking the European champion’s defensive line off a flat pass before rounding the fullback and skipping over the line after a timely hitch-kick.

“When you get quick ball now, you’ve got to be able to go quickly. You can’t sit back and wait for things to evolve,” Jones said. “To do that, you need a player who is very instinctive -- you can’t coach them to do it, they just do it, and you saw that when he scored that try (against Exeter).

“They are the things you can’t coach and what you are always looking for in players. It is probably more pronounced now, the way the game is going. You have this arm-wrestle around the ruck, where there’s 80% of the game. This one path. If you are able to break that ruck attack-defense down and get fast ball, you need really instinctive players who can take an opportunity.”

Jones confirmed Ford is out for “a couple of weeks,” which creates the potential opportunity for Umaga.

One thing is for sure: Farrell will be starting, and as captain, despite not playing competitively since getting banned for a high tackle in a match for Saracens in the European Champions Cup in early September.

“Whether he plays at 10, 12 or 13, is still to be decided this week,” Jones said before continuing the sushi analogy.

“He will definitely be in the restaurant. Whether he will be serving it or eating it, I’m not sure.”

England is a point behind Ireland going into the final round. Ireland has a superior points difference of 23 compared to England.

France is tied for points with second-place England but has an inferior points difference of 2.