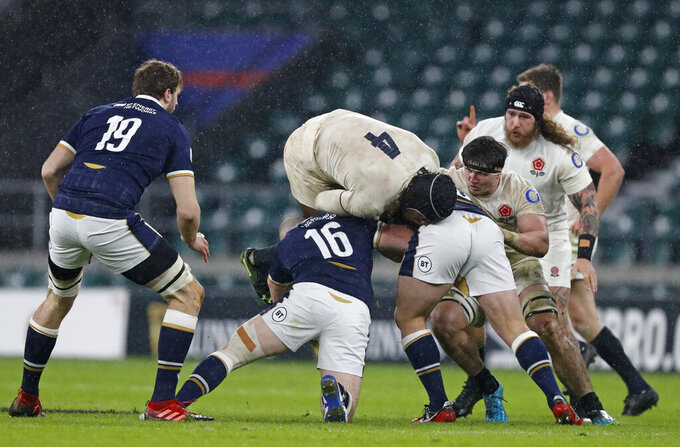 England's Maro Itoje, top center, goes over the top in a tackle during the Six Nations rugby union international between England and Scotland at Twickenham stadium in London, Saturday, Feb. 6, 2021. (AP Photo/Alastair Grant)

LONDON (AP) — Scotland posted its first win at Twickenham since 1983 by beating error-strewn titleholder England 11-6 in a dominant performance that shook the Six Nations on the opening day Saturday.

On the 150-year anniversary of the oldest international rugby fixture — also won by the Scots, in a 20-a-side match in Edinburgh — the Dark Blues outplayed their biggest rivals in every department, with the only surprise being the narrow margin of victory.

Ultimately, a first-half try by winger Duhan van der Merwe proved the difference but the contrast between the teams couldn’t have been starker in a one-sided match played in the rain in an empty stadium because of the pandemic.

England barely got near the tryline as Scotland enjoyed 65% possession and 70% territory. It was only three missed goalkicks by Finn Russell and Stuart Hogg, as well as some desperate English defense, that kept the scoreline close.

The roars of delight from Scotland’s players when England winger Jonny May fumbled a kick deep in his own half for a knock-on four minutes from time told its own story. The game was up for Eddie Jones' side and it was another sloppy handling error that went with a total of 15 penalties conceded by England, nine of them coming in the first 25 minutes.

“It’s amazing for us," said Scotland captain Stuart Hogg, clutching the Calcutta Cup. "We believed in each other and to a man deserved it.

“We got excited during the week because we knew we could put in a performance. If we got everything right, we stood a chance of winning.”

And that was clear by the half-hour mark, with the Scots having had more than treble the number of carries (52-15) and made almost triple the amount of meters gained.

That they were only two points ahead at 8-6 must have been painful, then, but that dominance continued into the second half, with the boys in blue visibly slicker and sharper.

“We were not at the races today,” Jones said. “I take responsibility. I didn’t prepare the team well enough. We just had one of those days. We don’t have many, but we had a bad day today."

Perhaps Jones will rue selecting five players from Saracens, the English club that was demoted from the country’s top division last season for breaching salary-cap regulations and hasn’t played a single league game this season because of coronavirus restrictions.

It meant the quintet's last competitive match was two months ago in the Autumn Nations Cup final against France, except for No. 8 Billy Vunipola who played in a cup game for Saracens last month.

“They got a fair bit of momentum off the back of a few penalties from us and they kept us out,” said England captain Owen Farrell, one of the Saracens contingent. “We didn’t get a proper foothold in the game."

That general lack of match sharpness contributed to England’s high early penalty count, the last of them — for a high tackle on Russell — earning Vunipola 10 minutes in the sin-bin.

The Scots were 3-0 ahead by that point, thanks to Russell’s sixth-minute penalty, and took advantage of their numerical superiority by scoring a 30th-minute try through Van der Merwe following a sweeping move from the right to his left wing.

Receiving the ball near the touchline, Van der Merwe shrugged off Elliot Daly as he came inside off his left foot, barged through the challenges of Farrell and Mark Wilson, and had enough momentum to ground for a try Russell couldn’t convert.

England responded with some rare territory and a penalty from Farrell, before Russell was sin-binned in the 38th for tripping Ben Youngs after the England scrumhalf threw a dummy and drifted inside the flyhalf.

Scotland conceded only three points while a man down, however — Farrell’s resulting penalty — and Russell had only just returned to the field by the time England conceded another penalty for offside while under pressure in their own 22.

Russell booted it for 11-6 and Scotland’s line wouldn’t be threatened thereafter.

“There was just a calmness about the way we played," Scotland coach Gregor Townsend said. "You could hear them in the field with no crowd, they were in so much control today.”