7 killed in protests over police custody death in Colombia 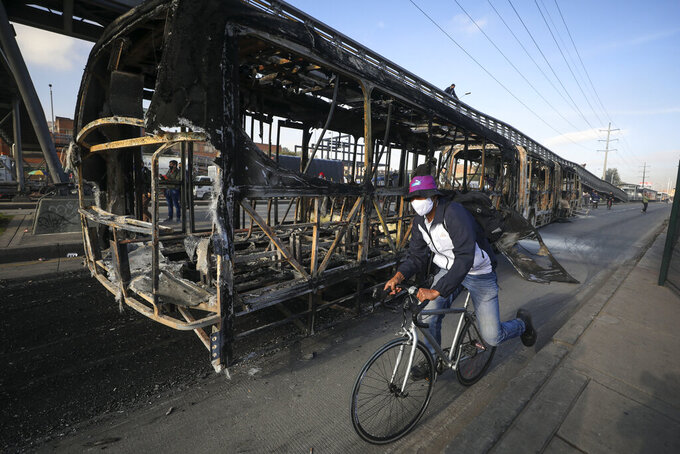 A cycler rides past a bus that was set on fire during overnight protests triggered by the death of a man who was detained by police for violating social distancing rules to curb the spread of the coronavirus in Bogota, Thursday, Sept. 10, 2020. Javier Ordonez died in a hospital after receiving repeated electric shocks with a stun gun from officers who detained him, seen on a video taken by Ordonez's friend, and published on social media. Authorities announced that the police involved were relieved of their duties as an investigation opens. (AP Photo/Fernando Vergara)

BOGOTA, Colombia (AP) — Violent clashes erupted in Colombia’s capital following the death of a man in police custody, with angry citizens setting fire to city buses, vandalizing police stations and squaring off with officers in confrontations that killed seven people.

The wave of violence Wednesday erupted over a video showing two officers holding down a 43-year-old man being tasered as he begged them to stop and highlights long simmering tensions over excessive use of force by police.

Authorities said Thursday that 56 police stations were damaged, eight city buses burned and 175 civilians injured during the unrest, including 66 hit by bullets.

“That didn’t even happen during combat in the worst moments of the Colombian armed conflict,” Mayor Claudia López said after visiting the injured at a hospital. “What happened yesterday was an indiscriminate, disproportionate, absolutely unjustified attack by some members of the police against the citizens of Bogota.”

The outrage stemmed from the death of taxi driver Javier Ordóñez. Police said they were called to respond to reports of a fight among a group of men who had been drinking late into the night in Engativa, a working-class Bogota neighborhood hard hit by the coronavirus pandemic.

“They turned aggressive against the police,” Col. Alexander Amaya said.

Video captured by witnesses shows Ordóñez, dressed in black pants and sneakers, being held down by officers as he cried out.

“He’s telling you to stop!” a witness yells in the background. “We’re recording you.”

According to officials, Ordóñez was taken to a police station and later to a hospital, where he arrived without vital signs. As word of his death got out Wednesday, citizens took the streets, defying government orders to avoid conglomerations because of the pandemic. Several streets were left with piles of ash and rubble.

The dead were mostly young people. The youngest was 17.

Authorities promised a thorough investigation, though relatives expressed skepticism that they would see justice in a country with high levels of impunity.

The mayor said she would insist on an independent probe by the attorney general’s office. “None of the families I’ve spoken with trust in an investigation by the police,” López said.

Police in Colombia were repeatedly accused of excessive use of force during anti-government protests that brought thousands to the street last year. The death of 18-year-old student Dilan Cruz, who was hit in the head by a projectile fired by police while protesting, sparked widespread outrage and condemnation from human rights groups.

The new unrest comes at a time of protests in the United States over racial discrimination and police abuse against Black citizens. The Colombia protests are more closely tied to abuse against the young and poor. Taking a cue from the U.S., the hashtag #ColombiaLives Matter began trending on Twitter.

Alejandro Lanz, a lawyer who leads Temblores, a group that tracks police violence, said he has documented 170 instances of excessive force this year. He expressed particular concern about the use of firearms by police and the presence of non-identified officers during Wednesday night's protests.

“We think these statistics are an undercount,” he said.

New demonstrations broke out as night descended on the city Thursday. Dozens of protesters tried to knock down a stoplight and set a trash bin on fire. Police deployed 1,500 additional officers and 300 soldiers throughout Bogota.

Colombia is emerging from a five-month lockdown aimed at curbing the spread of the coronavirus. Millions have lost their jobs, nearly 700,000 have been infected by the virus and over 22,000 people have died from COVID-19.

Authorities asked citizens to cease acts of violence and vandalism.