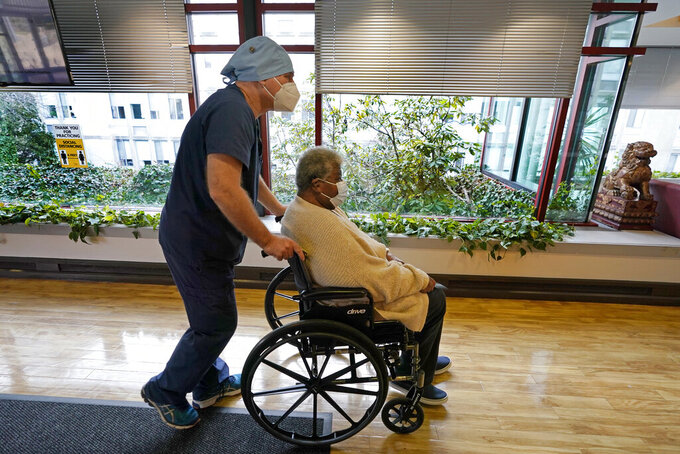 Patricia Marson is wheeled back to her room by nurse manager Rob Treiber after she became the first patient at Hebrew Rehabilitation Center to receive a COVID-19 vaccine, Wednesday, Dec. 30, 2020, in Boston. (AP Photo/Elise Amendola)

The governors of the six New England states and New Jersey have extended a prohibition on interstate youth hockey through the end of January.

The governors took the action because of coronavirus outbreaks associated with youth hockey activities.

In a news release late Wednesday, the governors of Maine, New Hampshire, Vermont, Massachusetts, Rhode Island, Connecticut and New Jersey said the prohibition, which had been set to expire Thursday, would be extended through Jan. 31.

The prohibition applies to all public and private schools and youth hockey leagues. It will be reevaluated as public health conditions warrant.

The prohibition does not affect interstate collegiate, professional or U.S. national team hockey.

In Vermont, the order does not affect rules that allow limited youth leagues and school-based sports programs within the state for people 19 and younger.

An organizer of a group that has held protests outside Gov. Chris Sununu's home in the weeks since he issued a mask order said no one openly carried a handgun or firearm at any of the gatherings.

“Organizers have made every effort, and have successfully discouraged any and all ‘armed protests' to date," Brennan Christian of the group Absolute Defiance said in a statement late Wednesday.

Sununu said earlier that he was canceling his outdoor inauguration ceremony Jan. 7 because of public safety concerns about armed protesters gathering outside his home in Newfields.

“For weeks, armed protesters have increasingly become more aggressive, targeting my family, protesting outside my private residence, and trespassing on my property — an outdoor public ceremony simply brings too much risk," Sununu said.

Protesters started gathering outside Sununu’s home on Nov. 22 in response to an order, which had taken effect two days earlier, requiring masks to be worn in public spaces, indoors or outside, when social distancing isn’t possible because of the coronavirus pandemic.

On Monday, police issued summonses to nine people and arrested one of them under a new anti-picketing ordinance.

Officials are concerned about the reduction in the number of vaccines Vermont will receive from the federal government next week.

The state is expected to get a total of 7,800 doses of a combination of both the Pfizer and Moderna vaccines next week, rather than the 11,000 doses it had expected, Human Services Secretary Mike Smith said Thursday during the governor’s biweekly virus briefing.

The reduction “can eventually have an impact on our overall vaccination timeline,” he said.

The state is contacting the federal government to see how the allocations can be increased to at least 11,700 doses a week, he said.

“This is at the federal level, and we're really trying to understand what is going on. You can't have a program where there's no predictability in what you're getting and then you get cut from one week to the next,” Smith said.

Six staffers at the Vermont Veteran's Home in Bennington have tested positive for the virus, Smith said. Facility-wide PCR testing was happening Thursday and will continue twice a week for the near future, he said.

The Connecticut Supreme Court has ruled that many of Gov. Ned Lamont’s shutdown orders related to the coronavirus pandemic are constitutional, thwarting a challenge from a pub owner.

Justices on Thursday rejected claims the Democratic governor is exceeding his legal authority in ordering the closing of bars and restricting certain other business activity in efforts to curb the spread of the virus.

Kristine Casey, who runs Casey’s Irish Pub in Milford, sued Lamont, saying he exceeded his authority and asked that his orders be blocked.

The Supreme Court disagreed and said the governor is charged with protecting the health and safety of citizens.

The grants are part of the a $668 million relief package announced last week.

About half the businesses are minority owned and 48% are owned by women, officials said. They include restaurants and bars, personal services and retailers.

The grants of up to $75,000, but not more than three months’ operating expenses, can be used for payroll and employee benefit costs, mortgage interest, rent, utilities and interest on other debt obligations.

A city's public health director, stressed by 10 months of nearly nonstop work handling the community's response to the pandemic, is taking medical leave.

“I’m exhausted,” Framingham Director of Public health Sam Wong told the MetroWest Daily News by phone on Wednesday. “I’m physically, mentally and even sometimes spiritually exhausted. I have given everything I’ve got for the city for the past 10 months and then some, and it has taken a toll on my health and it is to the point where I have to take a step back.”

Wong said he was also frustrated by the inequities and politics of the pandemic.

His last day is Thursday.

Assistant Director Alexandra DePalo will take over for Wong.

A Rhode Island woman has celebrated her 100th birthday after surviving COVID-19.

Eleanor Strom had a small party Wednesday with her daughter, Robin Harris, and grandson, Jason, at the Harris Health Center in East Providence, according to The Providence Journal.

Her many other descendants were not allowed to join them.

Strom was sick for about two weeks in November but was never ill enough to wind up in a hospital. Most of the time, she slept and let nature take its course.

“I feel absolutely blessed,” Harris said. “My mom is such a good woman, so close to God."

Maine Gov. Janet Mills is urging residents to safely celebrate the New Year at home and not let the fear of missing out cause them to do things against their better judgement.

“Before you think about going out tonight, before you go to a party down the street, before you invite a bunch of people over, think about the first responders, the EMTs, the nurses, CNAs and doctors whose lives are constantly put on the line by so many people getting deathly sick with this virus," she said in a Facebook video on Thursday.

Mills said to connect with people in other ways on a telephone, FaceTime or Zoom call.

“This crisis isn’t over. The virus is killing more and more people every day. Please don’t let your guard down," Mills said.