With $76B surplus, California proposes rebates for millions 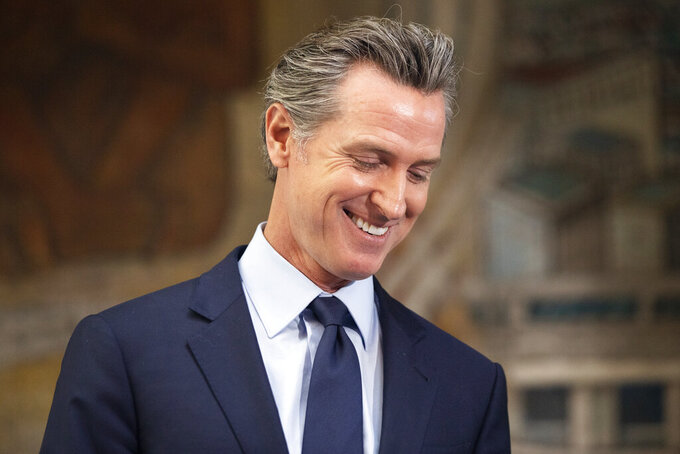 Gov. Gavin Newsom addresses the crowd during a news conference held at Unity Council career center in the Fruitvale neighborhood of Oakland, Calif., on Monday, May 10, 2021. (Jessica Christian/San Francisco Chronicle via AP)

SACRAMENTO, Calif. (AP) — Aided by an astonishing nearly $76 billion budget surplus, California Gov. Gavin Newsom on Monday proposed tax rebates of up to $1,100 for millions of households and more than $7 billion to help people affected by the pandemic cover rent and utilities.

It was Newsom's first in a weeklong roll out of pandemic recovery proposals totaling $100 billion, which could boost his political fortunes as he faces a likely recall election later this year. His opponents accused him of pandering and said the state would be better served by broader tax reforms.

Under his plan, roughly 11 million low- and middle-income Californians would see direct, one-time payments. Taxpayers making between $30,000 and $75,000 a year would get a $600 payment. Households making up to $75,000 with at least one child would get an extra $500 payment. It builds on an earlier payments to the lowest-income Californians and immigrants who pay taxes but did not get federal stimulus payments, including those living in the country illegally.

The projected $75.7 billion budget surplus is largely due to taxes paid by rich Californians who generally did well during the pandemic, and marks a major turnaround after officials last year said they feared a deficit of more than $50 billion. Officials from the state Department of Finance said multiple rounds of federal coronavirus bills boosted the state’s budget by putting money back into the economy. The stock market also did well, helping California’s tax collections. The state relies heavily on income taxes from the wealthiest people.

The state will also get $27 billion from the latest federal coronavirus spending plan, the U.S. Treasury Department announced Monday.

Under Newsom's plan, the direct payments would total an estimated $8.1 billion, said H.D. Palmer, a finance spokesman. The proposal also includes $5.2 billion to help with back rent and future payments and $2 billion for overdue utility bills for people who fell behind during the pandemic, though Newsom's office provided few details.

A law passed by voters in the 1970s requires the state to give some money back to taxpayers if the surplus hits a certain limit. The state estimates it will be $16 billion over that threshold. Newsom does not have to act immediately, but is choosing to do tax rebates now, Palmer said.

“We believe people are better suited than we are to make determinations for themselves on how best to use these dollars," Newsom said.

Oakland Mayor Libby Schaaf, who joined Newsom, urged immigrants to take advantage of free assistance to file their taxes and become eligible for the payments.

The budget surplus puts Newsom in a prime political position, said Eric Schickler, a political science professor at the University of California, Berkeley. It's a better position when “you’re able to give out surplus to millions of voters than in a mode of cutting the budget, raising taxes, asking for sacrifice," he said.

Newsom must introduce his revised state budget by the end of the week. The chairs of the state Senate and Assembly budget committees joined Newsom, indicating their support for a proposal that will go before overwhelmingly Democratic Legislature.

Jon Coupal, president of the fiscally conservative Howard Jarvis Taxpayers Association, said he did not think Newsom’s plan complied with the state law that limits how much the government can spend. But he didn't argue with the idea of giving money back to people.

“If he is giving money back to taxpayers, back to citizens, that is a positive thing. Who he is giving it to, we could argue about that," he said.

Businessman John Cox, who campaigned alongside a bear last week for attention, accused Newsom of engaging in a publicity stunt.

“The governor's got a lot of money to hand out. And of course, he's worried about his own neck," Cox said at a campaign event in Los Angeles.

Mindy Romero, director of the Center for Inclusive Democracy at the University of Southern California, said the cash payments could give Newsom a temporary boost but are unlikely to make or break his political future. Instead, his fate will likely depend on a collection of things like the pandemic, drought, wildfires and other issues that could be on voters' minds.

Combined with the earlier payment, the state would spend $11.9 billion on direct cash payments.

Democratic Assemblyman Phil Ting, the chamber's budget chair, summed up the plan as one that helps those most battered by the pandemic.

“That budget surplus is going right back to the most vulnerable Californians, the ones who need help the most," he said.