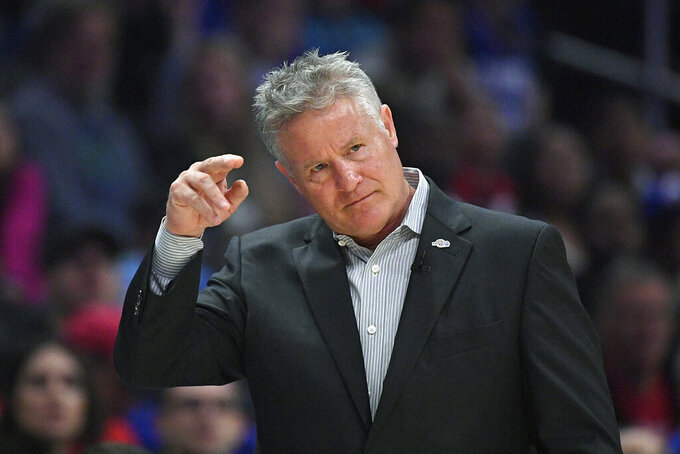 FILE - In this March 1, 2020, file photo, Philadelphia 76ers head coach Brett Brown gestures during the first half of an NBA basketball game against the Los Angeles Clippers in Los Angeles. Brown's job status is a hot topic around the NBA and a daily debate in Philly. (AP Photo/Mark J. Terrill, File)

PHILADELPHIA (AP) — Almost fitting for his seven-year tenure coaching the Philadelphia 76ers, Brett Brown had an injury to report: his 16-year-old dog pulled a hamstring on one of their daily walks.

But for the banged-up Sixers’ Big Dogs? Ben Simmons and Joel Embiid are coming along just fine from their injuries and should be healthy enough to play if the NBA season resumes — and end a season Brown expected the Sixers to contend for a championship.

“I think this team was built for the playoffs,” Brown said Friday.

Brown needs Embiid and Simmons, Philly’s All-Star franchise players, to be in shape and try to salvage a season that saw the Sixers fade from Eastern Conference contenders to just sixth in the standings (39-26) when it stopped March 11 because of the coronavirus pandemic.

That made Brown’s job status a hot topic around the NBA and a daily debate in Philly.

Brown led the 76ers from the Process — when the roster was purposefully stripped of real NBA talent to secure better draft picks — to consecutive 50-win seasons. The Sixers labeled themselves championship contenders this season, only to have a roster of mismatched parts, injuries and an abysmal road record (10-24) push them to the brink of a bust.

Brown has had two months to consider what a play-or-stop scenario could mean for his future.

“You’re human, you think about it all the time,” he said. “I wouldn’t say you think about it to the point where it weights you down. But I get it. I’ve been doing this for a long time. I feel this strongly, as it sits, in my sort of coaching world, this thing is so, for me, incomplete.”

The 23-year-old Simmons had missed his eighth straight game and was receiving daily treatment for his nerve issues in his lower back when the season stopped. Embiid was recovering from surgery on his left hand and had just returned after missing five games with a sprained left shoulder at the time of the shutdown. Embiid and Simmons had received permission to rehab at the Sixers practice facility in New Jersey.

“That was as disturbing a memory as it relates to a player that I can think of,” Brown said. “He’s lying on his back, he’s vomiting primarily because of pain. Trying to get him back on the plane and build him back up to some level of health where he can play basketball again and with us ... his health obviously ruled the day."

Brown, whose contract runs through 2021-22, said the opportunity for Simmons to rehab and get cleared to play should the season start was a rare positive during the break. Brown also spoke with Embiid for a bit Friday and found the good-natured center determined to get into top physical shape for a potential training camp. Embiid had missed 21 games this season and Brown counted on the big man to play 38 minutes a game in the postseason.

“He’s got a real desire to be at a playing weight that equals his best since he’s been in the league,” Brown said.

The Sixers had the best home record in the league at 29-2, the kind of percentage that would naturally make Brown lean toward playing at the Wells Fargo Center, even if meant the arena was empty.

“We were dominant at home,” Brown said. “Somewhere in the middle, I felt like everything was pointing to us landing the plane, getting good health and letting that environment be Judgment Day. I feel very confident, and respectfully, cocky, that we’ve done good work.”

The sting of last season’s elimination, when Kawhi Leonard sank the first Game 7-ending buzzer-beater in NBA history to lead Toronto past the 76ers in the East semis, still lingers for the franchise. Al Horford lost his starting job in his first season of a four-year free-agent deal and the Sixers could be headed to a potential playoff matchup with his former team, the Boston Celtics.

The break could be just the reset the Sixers needed.

“The mission has been, and will be, we need to hunt for a championship,” Brown said. “In many ways, I feel like the carpet has been pulled from this team.”