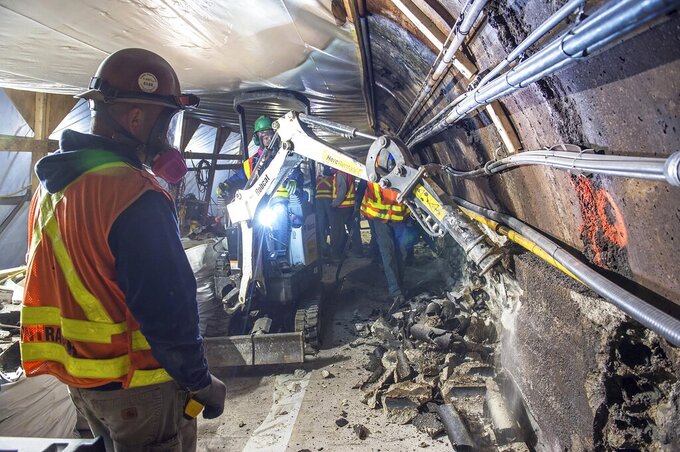 Eight years ago Thursday, Superstorm Sandy pushed the Hudson River over its banks, sending 8 feet of water onto underground tracks and leaving the main waiting room unusable for months.

Today, seating in the ornate, Greek Revival-inspired room is again prohibited, this time by concerns over the new coronavirus.

The storm is a dimming memory for many, pushed aside now by more pressing concerns brought on by the pandemic. Yet some repairs still aren’t completed. Billions of dollars in projects to protect transit infrastructure from future flooding are unfinished, as transit agencies face the parallel challenge of continuing to operate amid gaping budget holes caused by the pandemic.

It’s a heavy burden for a region where millions of people rely on public transit systems that have been buffeted by multiple major crises: the Sept. 11 terror attacks, Sandy and now COVID-19.

“It seems like at least once a decade, you’re going to get something that has a major impact on the transportation network,” said New Jersey Transit President and CEO Kevin Corbett, who previously headed the development corporation that oversaw the rebuilding of lower Manhattan after Sept. 11.

The recovery from Sandy has been lengthy for a number of reasons. Some projects lack needed federal funds, while others had money available but were delayed by internal conflicts and inefficiency. The sheer scope of Sandy’s damage and the havoc it visited on aging tunnels and other infrastructure also created delays.

“Just getting through the permitting processes, the bureaucracy, the change of administration; all these things add up. And infrastructure is just complicated to build," said Rob Freudenberg, vice president of energy and environment at the Regional Plan Association, an urban planning think tank. "So even something as urgent as getting our infrastructure back up or better prepared for a catastrophic storm like Sandy, has taken this long.”

New York’s Metropolitan Transportation Authority, which serves several million riders daily on subways, trains and buses, had to repair damage to more than a dozen bridges and tunnels, many pre-dating World War II, caused by tens of millions of gallons of saltwater.

Eight years later, the MTA is close to finishing the last one, a subway tube connecting Manhattan’s Lower East Side to Brooklyn. Like other transit projects around the region — though not all — the final stages have actually been speeded along by the pandemic because of curtailed train service.

Billions of dollars in additional resiliency work remain, including a $600 million project to build a 60-foot steel flood wall to protect a storage yard in Coney Island where up to 1,800 subway cars can be stored.

"Once we were able to go behind and lift every cover and see where the salt was beginning to corrode, that took time,” said Clarelle DeGraffe, general manager of the PATH system.

Salt deposits are slowly eroding the concrete walls that encase the 12,000-volt wires powering the trains, an effect worsened by the normal seeping of river water into the tunnels, said Amtrak's senior executive vice president and chief operating and commercial officer Stephen Gardner.

Despite a concerted effort by politicians and transit officials, an $11 billion project to build a new tunnel has been stalled by disagreements between the locals and the Trump administration on how much the federal government will pay. As a stopgap, Amtrak is finalizing a plan to accelerate repair work to reduce the number of delays until a new tunnel is built.

“It’s not where we wanted to be, but it’s what we need to do,” Gardner said.

The pandemic has drastically reduced ridership and decimated transit agencies' operating budgets — the MTA, for instance, is asking the federal government for $12 billion in aid. Capital budgets are separate and use federal and state money to pay for large-scale projects, but those could be affected as well depending on how long the pandemic lasts.

At Hoboken, the Port Authority expects to have resiliency work done by the end of the year that includes installing large flood doors and protecting elevators with aquarium glass. NJ Transit, which operates the bulk of the terminal, will end up spending nearly $3 billion in and around the terminal on numerous upgrades and resiliency projects, Corbett said.

NJ Transit got the federal funding for those and other projects after Sandy — but suffered from under-investment by the state, attrition of top management and a lack of long-term planning.

“We had the money available, we just weren’t able to get out of our own way and get those projects out to bid,” said Corbett, who took over in 2018.

Janno Lieber, the MTA’s president of construction and development, summed up the challenges facing the region.

“Everybody forgets New York is a waterfront town, it’s a beach town," he said. "That means you have to prepare for climate change as if you are Florida. That means the entire region is having to rethink its infrastructure, which was built at a time when all these industrial and mechanical uses were placed at the waterfront because it was the most available, undeveloped area. So the challenge is a waterfront town now has to equip itself for a world of climate change and rising sea levels and more frequent climatic events.”