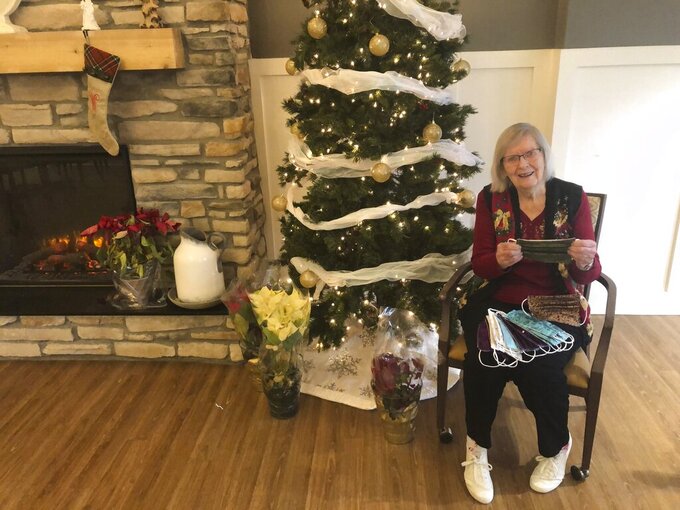 Miriam Looker, 95, displays one of the 1,700 masks she’s made since the beginning of the coronavirus epidemic using her quilting skills, on Monday, Dec. 21, 2020, in Marysville, Ohio. The only break Looker has taken from her 10-mask-a-day-routine came in November when came down with COVID-19 herself, which she said left her exhausted and needing a lot of naps. Looker is no stranger to using material to help save lives: during World War II she tested parachutes at Wright Field—now Wright Patterson Air Force Base—in Dayton. (AP Photo/Andrew Welsh-Huggins)

MARYSVILLE, Ohio (AP) — When the coronavirus pandemic began, Miriam Looker sprang into action at the behest of her stepson, a central Ohio doctor.

Looker, 95, used her supply of quilting materials and soon was making up to 10 masks a day at her assisted living facility in Marysville, about 30 miles (48.28 kilometers) northwest of Columbus. Then, as she pushed well over 1,000 masks, Looker took a break — to recover from COVID-19 herself.

After feeling exhausted and taking a lot of naps in November, Looker was feeling like herself again and started back in. She cuts out patterns at night and adds pleats while watching the news, then inserts elastic straps the next day.

The masks have gone to her stepson's patients, residents at Walnut Crossing Assisted Living Community where Looker lives, churches, hospice groups and schools.

“It’s something to do when you’re tired of reading and tired of whatever is going on, or don’t want to do it," Looker said. “I can always sew, and it was fun.”

Looker now estimates she's made about 1,700 masks, slightly ahead of a fellow resident who's pushing 1,300 of her own.

It's not the first time Looker has worked with material in an effort to save lives. In 1943, she had just finished her first year at Glenville St. College in her hometown of Glenville, West Virginia, when military recruiters came looking for women for the war effort.

After a summer training stint at West Virginia Wesleyan College in Buckhannon, she found herself in Dayton at what was then called Wright Field — today's Wright-Patterson Air Force Base — testing parachutes for the army. Testers would watch the troopers jump, record their hang time, then inspect parachutes for damage.

That experience explains a lot about her efforts to help during the pandemic, said her stepson, family practice Dr. Joseph Linscott.

“She’s just like Rosie the Riveter from WWII,” he said. “She went from making quilts to making masks. She changed her assembly line overnight.”

“I'm thinking about it," she said.

These days, Looker spends her time quilting, reading mysteries, staying current on politics and playing bingo. She uses her iPad to FaceTime with her children and grandchildren, do puzzles and check email.

She attributes her longevity to her parents' own long lives and a secret she shares: “Eat fruit every day.”

Looker knows there are coronavirus skeptics, and people who don't want to wear masks or think it won't help.

“If wearing a mask helps other people, you need to be doing it,” Looker said.