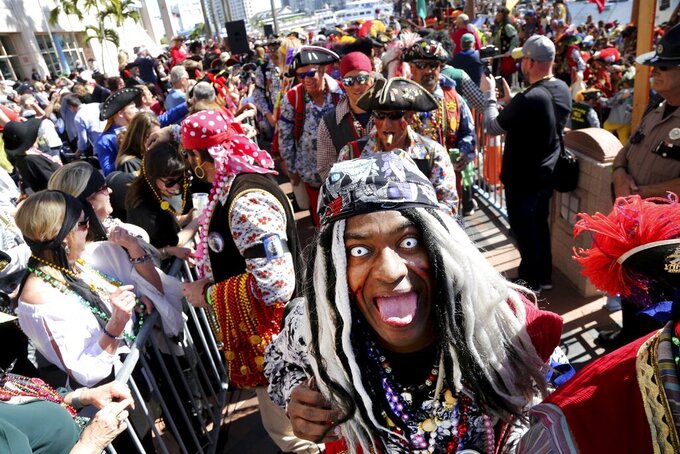 Members of Ye Mystic Krewe of Gasparilla, including Andre Kirwan, of Tampa, foreground, right, arrive at the Tampa Convention Center on the Jose Gasparilla pirate ship during the 103rd Gasparilla Invasion and Parade of the Pirates on Saturday, Jan. 25, 2020, in Tampa, Fla. The parade, which has been held for more than 100 years in Tampa, has been canceled this year due to the coronavirus pandemic. The group says the next one won't be held until January 2022. (Douglas R. Clifford/Tampa Bay Times via AP)

TAMPA, Fla. (AP) — For more than 100 years, Tampa has held a celebration of pirate lore known as Gasparilla. Avast, mateys, it's not to be this time.

Ye Mystic Krewe of Gasparilla represented Tampa's old guard when it began the event in 1904, and is still at the helm today. This year's event was postponed and then canceled due to the coronavirus pandemic. The group now says the next one won't be held until January 2022.

The Gasparilla parade annually draws hundreds of thousands of people as beads and other trinkets are thrown from floats, some resembling pirate ships and firing cannons. It runs along Tampa Bay on Bayshore Boulevard.

The parade includes music, marching bands, and much merriment. Some people, transformed into pirate garb, even yell, “Aargh!” or maybe, “Aye!”

A highlight is the mock invasion of Tampa by “krewe” members dressed as pirates coming ashore from a fully rigged 165-foot (50-meter) sailing vessel, decked out as if it came from the 18th century. The idea is that they come to “plunder and pillage” the city.

“After many conversations with the friendlies, we’re sad to announce that our krewe will remain offshore until the seas have calmed, and will not invade Tampa Bay’s shores in 2021,” the organization announced. “Heed our vow, we’ll return in 2022!”

There are 60 or so “ krewes ” in the parade who also do charitable and social events the year round.

Tampa Mayor Jane Castor also weighed in, tongue firmly in cheek, with an online statement praising the decision to cancel this year.

“Now we have more time here at the City of Tampa to batten down the hatches and roll out the cannons, as there is little doubt those ne're do well pirates will be after more than the key to the city next year!” she wrote.

Organizers say it's one of the largest parades in America. It had been scheduled for April this year, after the initial plan was delayed because of the global pandemic.

Many other large events have been canceled or postponed because of the coronavirus, including Mardi Gras parades in New Orleans and elsewhere.

The event in Tampa is named for Jose Gaspar, a Spanish pirate dubbed the “Last of the Buccaneers," hence the name of the Super Bowl champion Tampa Bay Buccaneers football team.

Truth be told, Gaspar was said to have roamed around the Gulf Coast of Florida before his death, thought to be in or about the year 1821, when Spain ceded Florida to the United States. It's not exactly clear who he actually was, but the story has taken hold in Tampa.