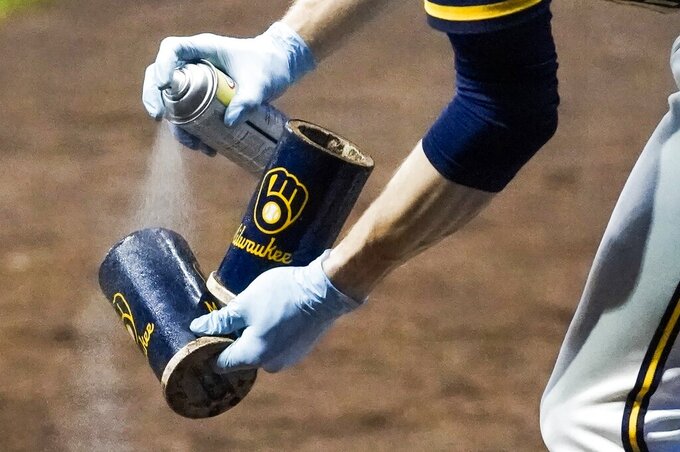 A batboy sprays disinfectant on some bat doughnuts during the seventh inning of a baseball game between the Milwaukee Brewers and the Chicago White Sox Monday, Aug. 3, 2020, in Milwaukee. (AP Photo/Morry Gash) 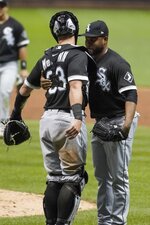 MILWAUKEE (AP) — José Abreu hit a tying, two-run homer in the seventh inning, Leury García scored on a wild pitch in the eighth and Yoan Moncada added a solo shot in the ninth to lift the Chicago White Sox over Milwaukee 6-4 in the Brewers' belated home opener Monday night.

“I was thankful to do my job today,” Abreu said. “We needed that hit, and I was just thinking making a good stroke to help the team. I want to just keep doing good things for this team.”

Milwaukee was set to open Miller Park for a weekend series against St. Louis, but that was postponed after numerous Cardinals tested positive for the coronavirus. The Brewers had been idle since Wednesday at Pittsburgh.

Chicago has won five straight, all on the road. Starter Carlos Rodón was pulled after two innings with left shoulder soreness, but Ross Detwiler (1-0) pitched 1 1/3 innings of scoreless relief, and Alex Colomé worked the ninth for his second save.

Nomar Mazara, reinstated from the injured list before the game, moved García to third with a pinch-hit single in the sixth off David Phelps (1-1). Phelps walked Nick Madrigal on a wild pitch that allowed García to score.

Moncada connected off Corey Knebel leading off the ninth.

Avisaíl García doubled, singled and drove in three for Milwaukee. His two-out single off Steve Cishek with the bases loaded in the fifth gave Milwaukee a 4-2 lead.

Ben Gamel added a two-out RBI single in the sixth, but that was it for Milwaukee as the White Sox bullpen shut them down after the sixth.

Rodón will be re-evaluated Tuesday. He allowed one run and three hits in his second start of the season. He threw 26 pitches, 22 strikes, as he continues his comeback from Tommy John surgery in May 2019.

The White Sox scored in the first on a fielder’s choice by Abreu and a sacrifice fly by Yasmani Grandal.

Leury García went 3 for 4 with three singles for Chicago.

Starter Brett Anderson was reinstated from the 10-day injured list with a blister on his left index finger before the game and made his Brewers’ debut. The 32-year-old lefty allowed two runs and five hits in three innings.

Brewers: Bench coach Pat Murphy continues his recovery from a heart attack suffered after infield practice on Saturday. Brewers’ medical staff responded immediately and transported Murphy to Froedtert Hospital where a stent was inserted. He is home now and is expected to make a full recovery. ... OF/1B Ryan Braun was placed on the 10-day injured list, retroactive to July 30, with an infected right index finger. ... The Brewers optioned C Jacob Nottingham to the alternate training site and recalled INFs Ryon Healy and Mark Mathias. OF Hedbert Perez and RHP Justin Topa were added to the 60-man player pool and sent to the alternate site.

RHP Shelby Miller, an eight-year veteran, surprised Brewers manager Craig Counsell by opting out of the remainder of the 2020 season. CF Lorenzo Cain made the same decision on Saturday.

Homeplate umpire Dan Iassogna was knocked off his feet by a pitch from Rodón in the second. Manny Pina didn’t swing at an inside offering and it hit Iassogna right in the chest. Brewers trainer Scott Barringer attended to Iassogna before play resumed.

Brewers: RHP Brandon Woodruff (1-1, 1.59 ERA) looks to build on beating the Pirates 3-0 on Wednesday when he allowed one hit in 6 1/3 innings. He has never faced the White Sox.