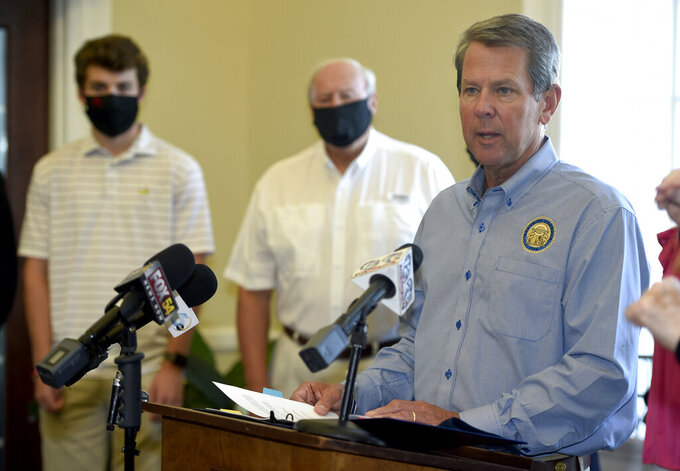 Georgia Gov. Brian Kemp speaks during a stop on his fly-around tour to encourage Georgians to stop the spread of COVID-19 in Augusta, Ga., Friday, Sept. 4, 2020. (Michael Holahan/The Augusta Chronicle via AP)

The payments were made last month after an audit by the state Department of Revenue, sending state revenue into the red in September, according to figures released Tuesday. State revenue fell by 3.6% compared to a year ago. Without the payment, it would have risen by a strong 7%.

A memo from Deputy Revenue Commissioner Jessica Simmons, released by the governor's office, said a number of businesses were using accounting software that misallocated taxes between late 2015 and early 2018. Further work found that the error ran all the way through 2018, until it was fixed in January 2019.

“All of the companies used the same tax accounting software that contained this error causing significant amounts of payments to be incorrectly attributed to state sales tax,” she wrote.

Georgia charges a 4% sales tax rates, while local governments charge 2% to 4.9% more, according to state figures. Simmons wrote that after auditors acquired missing information about which counties were owed money, the $240 million in payments were made last month.

Income and sales tax collections continue to grow by healthy amounts, suggesting a strong underlying economy despite an unemployment rate that remains elevated because of a torrent of layoffs sparked by the COVID-19 pandemic. State revenue is up 6.3%, or $365 million, over the first three months of the 2021 budget year.

It's unclear how much of that boost is due to federal stimulus payments to households and extra federal aid to unemployed people. President Donald Trump announced Tuesday he was breaking off talks with congressional Democrats over another round of federal spending, which could dampen the economic picture. Also, some people who have been having income taxes withheld from unemployment payments could be in line for income tax refunds next year, dampening the big windfall months Georgia sees when income taxes come in.

Lawmakers this year adopted a budget that spends $25.9 billion in state money. It included $950 million less in state aid to K-12 schools.

Higher revenue could allow lawmakers to put back some of the 10% cuts they made when they amend the current spending plan, which runs through June 30, as well as raise spending for the 2022 budget beginning in July.

Georgia could face an increase in costs for the state-federal Medicaid health insurance program next year because the federal government temporarily increased the amount it was giving to help states during the pandemic. Kemp has told agencies to plan for flat spending, meaning agencies haven't proposed restoring the cuts or other ways to spend new money.

This story has been corrected to show that, without the one-time payment, collections would have risen by 7%, not 7.3%.