'Adapt or die' -- Restaurants find ways to evolve amid virus 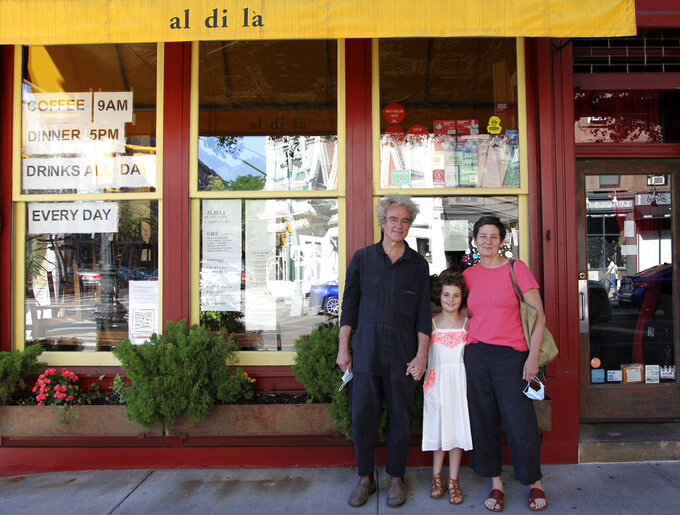 In this June 14, 2020 photo, Emiliano Coppa, left, and chef Anna Klinger pose with their daughter outside their trattoria, Al di La, in the Park Slope neighborhood in the Brooklyn borough of New York. The coronavirus has decimated the restaurant industry, leaving millions unemployed and shuttering spots for good. Many dine-in restaurants have turned to delivery or takeout, like Al di La. (Lisa Tolin via AP) 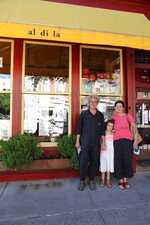 NEW YORK (AP) — When the coronavirus roared into New York, chef Anna Klinger wouldn't let it put a fork in her restaurant.

Al di La, the Brooklyn trattoria she runs with her husband, Emiliano Coppa, hadn't done much takeout until then. Their northern Italian food simply didn't travel well. Now it had to.

Because tagliatelli has a tendency to glue itself together into a ball, Klinger cooked it less and added more sauce. She offered Negroni cocktails to go and pints of her ice cream. She slimmed down the menu (goodbye, liver.)

Now the kitchen is waiting to pivot again — anticipating the day diners can return, in masks, of course, 6 feet apart. Klinger vows to do what it takes.

“What choice do we have?” she asked. “There are so many lives that are tangled with this restaurant, not just our own. And we still love it and we still do it every day. I can't imagine not doing it.”

The virus has decimated the restaurant industry, leaving millions unemployed and shuttering countless spots for good. Many dine-in restaurants have turned to delivery or takeout. Some have become food banks or trading posts.

“It’s either you adapt or you die,” said Octavio Olivas, chef and owner of Ceviche Project in Los Angeles. “Just keep hustling.”

According to the Department of Labor, the leisure and hospitality industry suffered its most brutal month ever in April when nearly 5.5 million chefs, waiters, cashiers and other restaurant staff lost employment. But the sector rebounded somewhat in May with an addition of more than 1.2 million jobs.

TV host and cookbook author Padma Lakshmi has no doubt the pandemic will change the restaurant landscape, with many locations unable to weather the storm.

“Most restaurants operate on a very slim margin. And even really big restaurants by very famous chefs often pay their invoices from 45 days ago with the earnings from today,” she said. “You can see how very quickly that would be a house of cards.”

Those restaurants that survived with takeout during the initial days of COVID-19 are now gradually opening their doors to welcome patrons to a very different dining experience than they offered this winter.

In California, the public health department mandates that bar areas be closed, menus be disposable and waiters not pour water tableside. Patrons must wear masks to the bathroom, and salt and pepper shakers may not be left on the tables.

“It’s like opening up a new restaurant in a whole new world,” said Kevin Meehan, co-owner and chef at the Michelin-starred Kali in Los Angeles. “It’s like a ‘Top Chef’ challenge, if anything.”

Kali, a seasonal California restaurant that serves such delicacies as prawn crudo and beet tartar, closed its doors on March 13, and Meehan sheltered with his family for three weeks, preparing meals for his twin daughters and making bread for neighbors.

Then he took baby steps back, dipping into a rainy-day restaurant fund to hire back a small group of workers to make takeout. He decided on family-style comfort food, adding written instructions on reheating and a warm greeting from the kitchen.

“Fine dining is creating memories. And how do you do that via a bag out of a box?” he said. “I wanted to make them comforting and delicious at the same time. So I put on the back burner being the creative, chef artist.”

Kali used to offer five lunch servings and seven dinner seatings a week. The virus cut it down to just four takeout dinners a week, with income dipping to as little as 25% pre-virus levels.

Last week, Kali took its first steps to welcoming patrons in again. On top of everyday health codes, Meehan has had to comply with new anti-virus mandates. He and his business partner have taken notes on how other restaurants in the area are reopening.

“This is coronavirus," he said. “This isn’t a joke. This isn’t a health code violation. This isn’t like my chicken being at 43 degrees, not 42 degrees.”

There are still so many unknowns. What if a patron forgets to wear a mask? Meehan has devised a clever way to remind them: His masked servers gently point to a sticker on their chest that says, “Please hide your smile.”

His menu currently has four appetizers, four entrees and two desserts — all dishes he calls his “greatest hits.” He laughs that when you go see Billy Joel in concert, you want to hear “Piano Man,” not the new stuff.

Not too far away in Los Angeles, chef Olivas has also needed to evolve. Few foods are are more difficult in a take-out world than raw fish, but that's his bread and butter.

A lawyer-turned-chef, Olivas opened the 480-square-foot Ceviche Project last spring as an intimate space where he would interact with patrons and serve the freshest seafood.

“The challenge for me was how can I make them have the same experience as if they were sitting here,” he said from his 28-seat restaurant.

Now, every weekend, you can find him outside it, carefully putting his prepared dishes into car trunks for pickup. Olivas sourced special packaging and rethought the menu: juice in a separate section, an ice bed for some dishes and showcasing the versatile shrimp.

He soon plans to feed people again at his restaurant. He's ordered tables for the sidewalk, umbrellas and palm trees, all to take advantage of southern California's summer nights.

“I think this is an opportunity, and hopefully we can keep doing it even after this ends,” he said. “We need to keep going and we need to make it better and we need to grow.”

In the Lehigh Valley, the farm-to-table restaurant Bolete is definitely growing — it's building six private patios on church-owned land across the street from its spot in Bethlehem, Pennsylvania.

Patrons will pre-order their meal and drinks, and will get a little basket with disposable flatware and a cooler. A florist is making the spaces beautiful and there's a luxury portable restroom.

When the virus hit, Bolete abandoned its five-course tasting menu in favor of curbside-pickup, family-style meals and things it would never normally do, like mac and cheese. It also offered high-end provisions, like duck egg salad.

Erin Shea, the owner, general manager and wife of the chef, Lee Chizmar, said the past few months have reminded her of 2007, when Bolete opened.

“You have to get as scrappy as when you started,” she said.