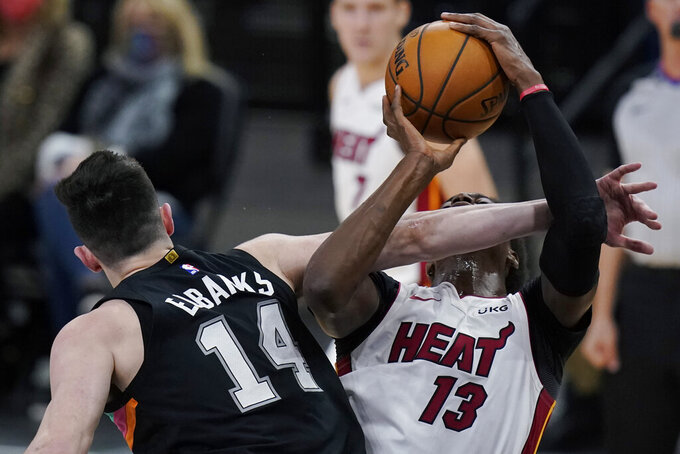 Miami Heat center Bam Adebayo (13) is fouled by San Antonio Spurs forward Drew Eubanks (14) as he drives to the basket during the second half of an NBA basketball game in San Antonio, Wednesday, April 21, 2021. (AP Photo/Eric Gay) 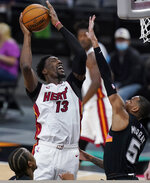 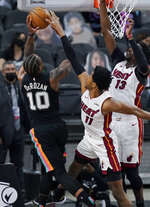 Tyler Herro added 22 points for Miami, which has won nine of 13.

San Antonio was led by DeMar DeRozan with 15 points. Derrick White added 13 points, Dejounte Murray had 11 and no other player scored in double figures for the Spurs, who have lost five straight at home.

Butler, Adebayo, and Herro were all listed as questionable with leg injuries but contributed early for the Heat with Adebayo setting the tone offensively and defensively.

Cut from the Gregg Popovich-led USA Men’s National Team in advance of the 2019 FIBA Basketball World Cup, Adebayo continued to make his case for inclusion in the Tokyo Olympics this summer.

Adebayo was 8 for 12 from the field and 7 for 8 on free throws while scoring all his points in the first three quarters. The 6-foot-9 center also had eight rebounds, four assists and three steals in 31 minutes.

San Antonio had won two straight but was unable to continue the explosive offense it demonstrated on the road.

Popovich is unsure if 85% of the Spurs will be fully vaccinated this season, which would trigger a lessening of the league’s health and safety protocols for the team. The NBA and the NBA Players Association agreed to allow players to go to outdoor restaurants, leave hotel rooms at any time and eliminate PCR tests on off-days among other actions if 85% of a team’s players and staff are fully vaccinated.

San Antonio's veteran coach recommends getting the COVID-19 vaccination to any Spurs player that is hesitant about doing so.

“I’ve told my team already,” Popovich said. “I’m one of those guys, I never take a flu shot. I think the last time I took a flu shot was when I was in the military. I got vaccinated (for COVID-19) because it’s a different deal. Although people do die from the flu, this is a much more critical, much more dangerous virus and you help save others. So, it’s almost like a civic duty, in my opinion. You don’t just help yourself, but you’re helping your fellow citizens stay safe.”

Heat: Butler returned from a two-game absence due to a sprained right ankle. … Adebayo and Herro returned after missing Monday’s victory against Houston. Adebayo sat out with a sore right knee and Herro had a sore right foot. … Former Spurs center Dewayne Dedmon had six points and three rebounds in 15 minutes. Dedmon played for the Spurs in 2017 and signed with the Atlanta Hawks the following season. … The Heat are 14-15 on the road this season.

Spurs: San Antonio is 28-5 at home against Miami. … DeRozan has scored 1,000 points for the 11th consecutive season, joining LeBron James and Russell Westbrook as the only players do so since 2010. … Poeltl finished with five blocks, including two on KZ Okpala on the same possession in the final seconds of the first quarter. … Trey Lyles missed his 13th straight game with an ankle injury.