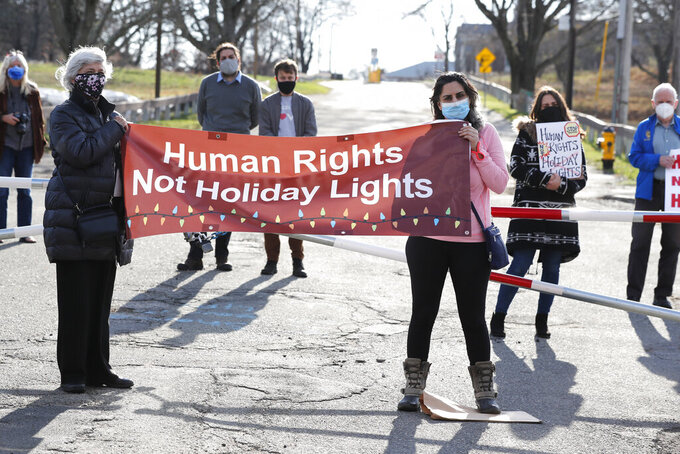 A group protests against a planned holiday event outside the former Walter E. Fernald Developmental Center, Friday Nov. 20, 2020, in Waltham, Mass. A plan to create a large drive-thru holiday lights display on the grounds of the disgraced former state facility, where mentally disabled youths once were warehoused and subjected to experiments, has touched off angry protests by activists who say it's inappropriate. (AP Photo/Michael Dwyer)

WALTHAM, Mass. (AP) — A battle is underway in a Boston suburb over whether it is appropriate to hold a joyous holiday celebration at the site of a now-closed institution where developmentally disabled children were once abused, neglected and warehoused under deplorable conditions.

The Waltham Lions Club drive-thru Greater Boston Holiday Light Show, a fundraiser for the service organization, is planned for the site of the Walter E. Fernald Developmental Center.

Calling use of the site “disgraceful,” a coalition of disability rights advocates has asked Waltham Mayor Jeannette McCarthy to pull the club’s permit and find an alternate site for the event scheduled to run from Nov. 27 to Jan. 3.

The problem is not with the Lions, who “do amazing work,” said Alex Green, an adjunct lecturer at the Harvard Kennedy School and an activist who took part in a protest Friday to try to get the city to change its mind.

“We understand everybody needs a boost like a light show right now,” said Green, who also launched an online petition to get the city to change its mind. “Our only argument is this is not the place for one. This is a site with an enormous amount of torment in its history."

The Fernald Center, which moved to Waltham in the late 19th century, became a place where the developmentally disabled, including those with cerebral palsy and Down syndrome, were shut away from a society of which they were deemed unfit to be a part.

Walter Fernald himself was a proponent of eugenics and forced sterilizations, which occurred at the institution, according to a letter to the mayor from Phillip Kassel, executive director of the Mental Health Legal Advisors Committee.

One experiment in the 1940s and '50s involved feeding residents radioactive oatmeal.

“A city’s holiday celebration ought to be a source of joy for the entire community, particularly in these divisive times and in the midst of a spiking pandemic that is generating unprecedented stresses in our communities,” he wrote. “This cannot happen at the planned site.”

A message was left Friday with McCarthy.

The 196-acre site had transitioned to a center for developmentally disabled adults by the time it closed in 2014 and was bought by the city. Although the city has considered building a new high school or police station on the property, it remains largely unused.

The Lions describe their event as “over one mile of roadway transformed into a glittering display of over 1 million LED lights and animatronic scenes” that people can enjoy without leaving their cars. Setup has already started.

The club was surprised by the opposition to the light show, given that it has held events at the Fernald site in the past, President Liz Pulice said. She also pointed out that the city, not the club, selected the site.

The light show is critical to the club's bottom line and mission, because so many other fundraisers have been canceled this year and its budget is about one-third of a normal year, she said.

The Lions have held events in the past that benefited Fernald residents and continue to support organizations that serve the disabled, she said.

“We're not blind to the historic nature of this property," she said. “Our goal is to bring something positive to the city of Waltham that has been deeply impacted by the pandemic."