AFC features plenty of star power even without Tom Brady 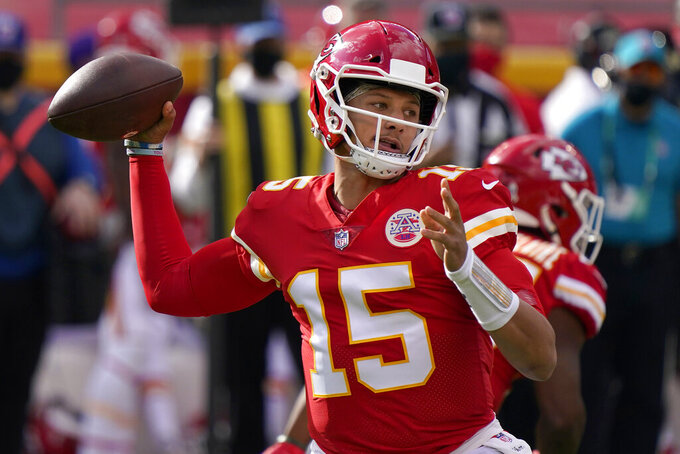 The AFC doesn’t lack for drama or star power even though Tom Brady has taken his talents to Davis Beach.

The six-time champion with New England is tearing up the NFC at age 43 although the Tampa Bay Buccaneers’ new (old) quarterback is realizing Drew Brees is every bit the nemesis Peyto Manning was.

In the wake of his departure, the Patriots have crashed like a meteorite, Tua Tagovailoa looks like the answer in Miami and the Bills are chasing their first AFC East crown in a quarter century.

Lamar Jackson again leads an potent Ravens team, Patrick Mahomes and the Chiefs have suffered no hangover from their first Super Bowl title in half a century and the AFC South-leading Titans have weathered the worst coronavirus outbreak of this pandemic season.

But the biggest story is in Pittsburgh, where the unbeaten Steelers (8-0) are off to the best start in the storied franchise’s 87-year history but were hit with the news Tuesday that battered quarterback Ben Roethlisberger has been placed on the COVID-19/reserve list along with three teammates.

This disturbing development came a day after Steelers tight end Vance McDonald went on the list after testing positive following a closer-than-expected 24-19 win at Dallas, which came down to the final snap just as Pittsburgh’s two previous games did.

The NFL’s last unbeaten team isn’t overpowering opponents as much as they are outlasting them, and heading into the second half of the season, the Steelers are the hunted.

“We have a target on our back,” tight end Eric Ebron said. “We’re undefeated.”

Plenty of teams believe they can supplant Pittsburgh on their way to hoisting the Lamar Hunt Trophy in his most unusual of seasons:

EAST: After winning the division 11 consecutive years, the Patriots (3-5) needed a last-second field goal just to beat the winless Jets. Bill Belichick finds himself looking up at the improving Bills (7-2) and the long-suffering Dolphins (5-3), who have their best record at the season's midpoint since 2001 and have won four straight, including both of Tagovailoa’s starts.

Tagovailoa outdueled Kyler Murray last weekend in a big win at Arizona, suggesting coach Brian Flores’ timing was right in making the widely scrutinized switch at quarterback from Ryan Fitzpatrick. Even the Jets (0-9) could be big winners by prevailing in the Trevor Lawrence sweepstakes.

NORTH: The Steelers have already matched their eight wins from last season, but the Ravens (6-2) remain a stout challenge despite Jackson, the reigning NFL MVP, not running or passing as efficiently as he did a year ago when he led Baltimore to an NFL-best 14-2 record.

The Browns (5-3) are in position to end the league’s longest playoff absence at 18 years after bouncing back from an awful opener in Baltimore in which they were completely outclassed in a 38-6 blowout. The Bengals (2-5-1) are more competitive with No. 1 pick Joe Burrow under center and have already matched last year’s win total.

SOUTH: After weathering the NFL’s worst coronavirus outbreak, the Titans (6-2), behind Ryan Tannehill and Derrick Henry, are off to their best start since 2008, the previous time they won the AFC South. They’re one game ahead of the Colts (5-3), who love having landed veteran QB Philip Rivers.

Houston stars J.J. Watt and Will Fuller were both the subject of trade speculation after the team’s terrible start cost coach Bill O’Brien his job. But the Texans (2-6) kept both and trust they can help turn things around. The Jaguars (1-7) have a fan base already focused on the future, an all-too-familiar feeling in Jacksonville.

WEST: The Chiefs (8-1) are still the class of the conference despite a hiccup against the resurgent Raiders (5-3), who won 40-32 at Arrowhead Stadium on Oct. 11. Mahomes became the fastest quarterback in NFL history to reach 100 TD passes, doing it in 40 games, four fewer than Dan Marino.

The Broncos (3-5) have been waylaid by injuries and COVID-19 opt-outs, exposures and infections and Drew Lock went 45 drives without a TD pass. He did rally Denver from a 21-point deficit to beat the Chargers (2-6), who have lost five times on the final play but are thrilled with rookie Justin Herbert’s four 300-yard games and 17 TD throws in seven starts.