Afghan athlete Zakia Khudadadi gets her chance in taekwondo 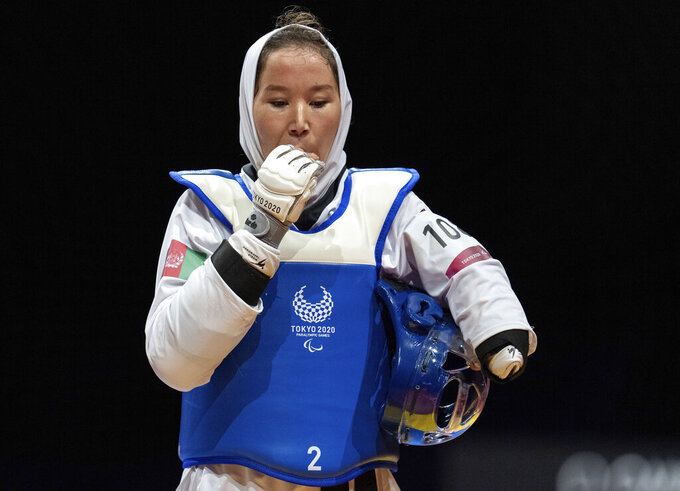 Zakia Khudadadi of Afghanistan stands after fighting against Viktoriia Marchuk Ukraine in the Women's 49kg Taekwondo Repecharge at the Tokyo 2020 Paralympic Games in Makuhari, Japan, Thursday, Sept. 2, 2021. (Joe Toth for OIS via AP)

TOKYO (AP) — Afghan athlete Zakia Khudadadi got her chance to compete in the Tokyo Paralympics on Thursday.

Khudadadi, one to two Afghans participating in the Paralympics, lost her first-round match in taekwondo in the 44-49-kilogram weight class to Ziyodakhon Isakova of Uzbekistan 17-12.

She also dropped a losers' bracket match against Viktoriia Marchuk of Ukraine 48-34.

Teammate Hossain Rasouli competed on Tuesday in the long jump, where he finished last. Rasouli is a sprinter, but he arrived several days too late to run in the 100-meter race.

The Afghan athletes arrived in Tokyo days after the Paralympics opened, both fleeing Kabul for Paris, and then on to Tokyo.

Neither Khudadadi nor Rasouli have spoken in public since arriving, and officials have allowed them to skip interviews with reporters to protect their privacy.

International Paralympic Committee spokesman Craig Spence was asked to update the status of the Afghan athletes, but could not offer much.

“We've left them be for the last few days to focus on competition,” he said. “We'll now start to have conversations about what happens in terms of the closing ceremony and where they go next. Those are the conversations we'll be having in the coming days.”

The closing ceremony is Sunday.

Several countries, including Australia, have been mentioned as possible destinations.

Also, Belgian wheelchair athlete Jochaim Gerard has been hospitalized after feeling faint on Tuesday evening in the Olympic Village.

Spence said Gerard, ranked No. 3 in wheelchair tennis, had a “cardiac” issue. He was in stable condition and was expected to remain in the hospital for tests, Spence said.

In a statement, the Belgian Paralympic Committee said Gerard “suddenly and unexpectedly felt faint” and was transported to a hospital. It said he regained consciousness in the hospital and could answer questions.