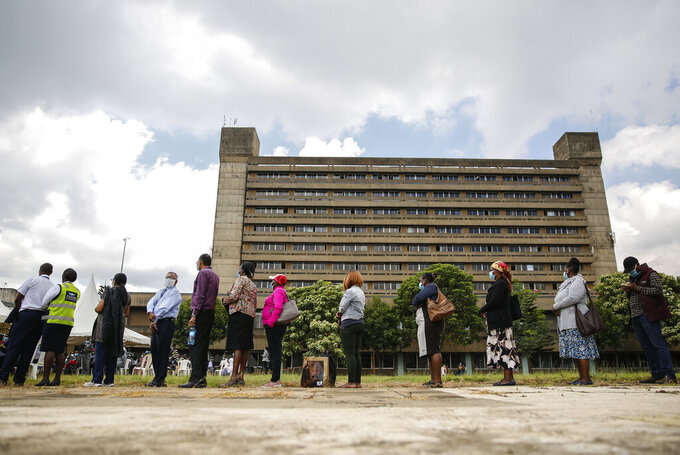 Kenyans line up to receive a dose of the AstraZeneca COVID-19 vaccine manufactured by the Serum Institute of India and provided through the global COVAX initiative, at Kenyatta National Hospital in Nairobi, Tuesday, April 6, 2021. (AP Photo/Brian Ingasnga)

NAIROBI, Kenya (AP) — Africa's top health official said Thursday he wants to believe that India will lift export restrictions on COVID-19 vaccines as soon as possible, warning that “India is not an island” while some African nations still have seen no shots at all.

John Nkengasong, director of the Africa Centers for Disease Control and Prevention, spoke as the African continent of 1.3 billion people doesn’t know when second doses of key vaccines will arrive and India sees a devastating resurgence in infections. India is a major vaccine producer and a key supplier to the United Nations-backed COVAX initiative aiming to bring shots to some of the world’s poorest countries.

“If you finish vaccinating your people before Africa or other parts of the world, you have not done yourself any justice because variants will emerge and undermine your own vaccination efforts,“ Nkengasong said in a weekly press briefing, highlighting what has become a global crisis with as many as 60 countries possibly stalled at their first shots.

He said the uncertainty around the arrival of second doses puts the African continent in a “very dicey situation.” Some countries have already exhausted their initial vaccine doses, including Ghana and Rwanda, he said.

In Kenya, the Cabinet secretary for health warned that some local counties have begun “hoarding” first doses of vaccines “in the mistaken notion of releasing the doses only when they receive doses for the second phase of vaccination.”

Mutahi Kagwe said there is no need to panic in a country currently seeing a resurgence in cases, saying people will receive their second dose of the AstraZeneca vaccine between eight and 12 weeks after their first.

The Africa CDC director stressed that people should not worry now about receiving delayed second doses, but added that “we are very insistent, use the vaccines before the first expiration date” despite guidance he said the Serum Institute had given on an extension beyond the 12-week window currently recommended.

But uncertainty is widespread.

A World Health Organization vaccination official in Africa, Richard Mihigo, told The Associated Press that “COVAX continues to engage in intensive discussions with the government of India and Serum Institute of India to maintain some supply in April, and resume supply in full in May to June.” However, for those second doses hoped for in May and June, “we have no clear indication of when deliveries would resume and how many doses would be released.”

Meanwhile, Mihigo said, “we saw positive signs that the remaining African countries for which initial deliveries were suspended will have received initial COVAX doses in the coming week.”

African governments were already anxious about vaccine supplies as the world's richer nations acquired the bulk of doses for themselves. Mihigo said just one in 500 doses globally has been given in low-income countries.

Now African nations have the added uncertainty of questions raised about the two main vaccines available for the continent, AstraZeneca and Johnson & Johnson.

South Africa this week suspended the use of the Johnson & Johnson vaccine due to preliminary reports of rare blood clots, leaving the country with Africa's highest number of infections without any shots at all. In February, it scrapped plans to give the AstraZeneca vaccine to health care workers because a small, preliminary test showed it gave minimal protection against mild to moderate cases of COVID-19 caused by the variant dominant there.

African officials aim to vaccinate some 750 million people across the continent over the next two years. So far, just under 14 million vaccine doses have been administered across the 54 countries.

More than 34 million vaccine doses have been acquired, with 32 countries having received them from COVAX.

Africa has confirmed 4.3 million coronavirus infections and has a case fatality rate of 2.7%, above the global average of 2.2%. The past week has seen a 2% decrease in new cases.