In Africa, vaccine hesitancy adds to slow rollout of doses 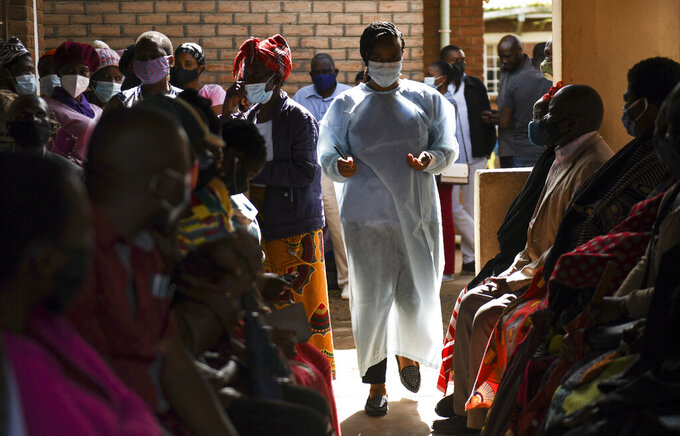 FILE - In this Monday, March 29, 2021 file photo, numbers are handed out to people waiting to receive the AstraZeneca COVID-19 vaccine at Ndirande Health Centre in Blantyre Malawi. Some Africans are hesitating to get COVID-19 vaccines amid concerns about their safety, alarming public health officials as some countries start to destroy thousands of doses that expired before use. (AP Photo/Thoko Chikondi, File)

KAMPALA, Uganda (AP) — Some Africans are hesitating to get COVID-19 vaccines amid concerns about their safety, alarming public health officials as some countries start to destroy thousands of doses that expired before use.

Malawi and South Sudan in recent days have said they will destroy some of their doses, a concerning development on a continent where health officials have been outspoken about the need for vaccine equity as the world's rich nations hold the bulk of shots.

Africa, whose 1.3 billion people represent 16% of the world's population, has received less than 2% of the COVID-19 vaccine doses administered around the world, according to the World Health 0rganization.

The continent has confirmed more than 4.5 million COVID-19 cases, including 120,000 deaths, a tiny fraction of the global fatalities and caseload. But some experts worry that the 54-nation continent will suffer in the long term if it takes longer than expected to meet the threshold scientists believe is needed to stop uncontrolled spread of COVID-19 — 70% or higher of the population having immunity through vaccination or past infection.

Achieving that goal will require about 1.5 billion vaccine doses for Africa if the two-shot AstraZeneca vaccine continues to be widely used. But safety concerns relating to that vaccine, often the main shot available under the donor-backed COVAX program to ensure access for developing countries, have left some Africans worried.

Vaccine-related suspicions have been spread widely on social media, driven partly by a general lack of trust in authorities. Uganda's health minister had to refute allegations she faked receiving a shot, even posting a video of herself getting the jab on Twitter, along with the admonition: “Please stop spreading fake news!"

Some have raised the untrue claim that the shots can cause infertility on sites such as WhatsApp. Others openly question the speed with which COVID-19 vaccines have been developed.

“The world has failed to find a vaccine for AIDS all these years, but they quickly found a vaccine for COVID? I am not going to go for that vaccine,” said Richard Bbale, an electrician in the Ugandan capital, Kampala, voicing fear that an experimental vaccine could be harmful. “Even if the government forces us to get the vaccine as if it’s a national ID, I will not go.”

Austin Demby, Sierra Leone’s health minister, told reporters last week that a third of the 96,000 doses the country received in March will likely not be used before they expire, citing a lack of urgency among some people who decided that COVID-19 is “not as bad as Ebola,” which ravaged the country several years ago.

“People are worried this is another public experiment they want to make on our people," he said.

The World Health Organization and the Africa Centers for Disease Control and Prevention have urged African governments to continue rolling out the AstraZeneca vaccine, saying its benefits outweigh any risks after European countries limited its use over concerns about rare blood clots in a small number of recipients.

“Anything you take has a risk. Any medication," Africa CDC director John Nkengasong told a briefing last week, citing some essential drugs that can cause blood clots in rare cases. “That's the way we should be looking at these vaccines.”

The Africa CDC said in a statement last week it had received guidance from the Serum Institute of India recommending a three-month “shelf life extension” on the April 13 expiration date of at least a million AstraZeneca shots delivered to Africa.

Africa nations “don’t have a choice,” Nkengasong said, urging Malawi to use all its shots after authorities in the southern African nation said they would burn 16,000 AstraZeneca doses that expired earlier in April.

It is unclear if Malawi will follow that advice.

The country has administered less than half of more than 500,000 doses it received via COVAX, leading Victor Mithi, head of the Society of Medical Doctors in Malawi, to blame vaccine misconceptions.

“We are continuously assuring Malawians that the vaccine is safe and that once they feel anything abnormal beyond the usual post-vaccination symptoms, they can always come to the hospital and report,” he said.

An additional 1.26 million doses expected from COVAX at the end of May may be wasted if people continue shunning the vaccine, said Shouts Simeza, president of the National Organization of Nurses and Midwives in Malawi, adding that a possible solution is making vaccinations mandatory for all who are eligible.

Trying to increase coverage, Malawi's government has relaxed vaccine eligibility rules to include everyone aged 18 and older after initially focusing on priority groups such as health workers.

The East African nation of Uganda, which also is struggling to increase vaccine rollout among priority groups, may soon act similarly, said Emmanuel Ainebyoona, spokesman for the Ministry of Health. Ugandans under age 50 have shown interest in getting vaccinated, raising hope that doses will not expire unused, he said.

Uganda has received 964,000 doses of the AstraZeneca vaccine, the only one available in the country. But just over 230,000 doses have been administered since March 10.

Health authorities had planned to give at least 500,000 people their first shot in a first round of vaccinations targeting front-line workers, people with underlying health conditions and those 50 and older.

But, amid a slow rollout, they are now reaching out to popular “influencers,” celebrities such as a kickboxer who was photographed getting a shot last week.

“The uptake is gradually improving,” Ainebyoona said, noting that “communications interventions” have proved necessary to get more Ugandans to embrace the vaccination campaign.

A few thousand people are inoculated daily at centers put up across the country, including inside regional hospitals. The local Daily Monitor newspaper recently reported that more than 280,000 doses will likely expire by July at the current average of about 6,000 shots used each day.

Vaccination teams, lacking official records of eligible residents, simply sit and wait for people who may not show up.