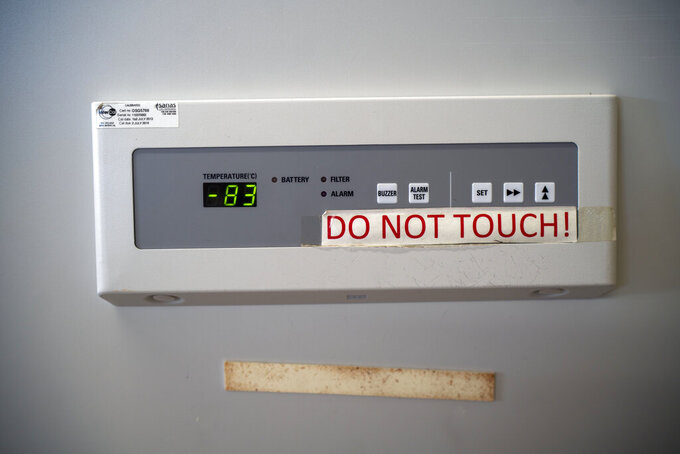 A thermometer display reads minus 83 degrees Celsius on a medical storage fridge at the Ndlovu clinic's lab in Groblersdal , 200 kms north-east of Johannesburg Thursday Feb. 11, 2021. African countries without the coronavirus variant dominant in South Africa should go ahead and use the AstraZeneca COVID-19 vaccine, the Africa Centers for Disease Control and Prevention said Thursday, while the World Health Organization suggested the vaccine even for countries with the variant circulating widely.(AP Photo/Jerome Delay)

NAIROBI, Kenya (AP) — African countries without the coronavirus variant dominant in South Africa should go ahead and use the AstraZeneca COVID-19 vaccine, the Africa Centers for Disease Control and Prevention said Thursday, while the World Health Organization suggested the vaccine even for countries with the variant circulating widely.

They spoke to reporters a day after South Africa announced it would not use the AstraZeneca vaccine, citing a small study that suggested it was poor at preventing mild to moderate disease caused by the variant.

Africa CDC director John Nkengasong said seven countries on the 54-nation African continent have reported the variant and none besides South Africa is “overwhelmed” by it. No other has expressed concerns about the AstraZeneca vaccine. The seven countries are South Africa, Botswana, Comoros, Ghana, Kenya, Mozambique and Zambia.

In a separate briefing, WHO Africa chief Matshidiso Moeti added Tanzania to that list, saying two travelers from there had been found to be carrying the variant in “the UK, I believe.” Tanzania’s president has denied that COVID-19 exists in the East African nation, which has not updated its number of infections since April, even though reports are growing of a surge in infections there.

Africa is only now beginning to see the large-scale arrival of COVID-19 vaccines, and this week’s news from South Africa, the continent’s hardest hit country, was a shock.

The Africa CDC says African countries with the variant now dominant in South Africa should speed up plans to introduce all COVID-19 vaccines that have received emergency use authorization or approval by regulatory authorities, while considering their effectiveness against variants first reported in South Africa and the UK.

Suggesting that countries go ahead with the AstraZeneca vaccine even if the variant is circulating widely, the WHO’s Moeti said “what’s important is the opportunity is there to continue to study the vaccine" and its effectiveness.

AstraZeneca doses are expected to start arriving in other parts of Africa in the next two weeks, the Africa CDC’s Nkengasong said.

And the WHO's Moeti looked forward to a significant rollout of vaccines in March, adding that 34 of Africa’s countries now have their rollout plans in place.

On Thursday, Equatorial Guinea said it had received 100,000 doses of China’s Sinopharm vaccine. It was the first West African nation to receive a large amount of the vaccine. Vice President Teodoro Nguema Obiang Mangue has said he will be the first to be vaccinated.

The African continent has seen an average 18% decrease in new virus cases over the past four weeks, which Nkengasong called encouraging. But he warned that studies show more people have been exposed to the virus than the 3.7 million cases confirmed, and “we are definitely not counting all the deaths, especially in the second wave.”

Africa has more than 96,000 confirmed deaths, and the WHO Africa chief said the continent in the coming week will pass the “devastating marker” of 100,000 deaths.

The African continent on Sunday will mark one year since the first virus case was confirmed there, in Egypt.

While the recent resurgence of cases has been much deadlier than the first wave, “Africa has much to be proud of for the initial response, and it certainly did much better than Europe,” Peter Piot, director of the London School of Hygiene & Tropical Medicine, told the WHO briefing.

Piot urged an equitable global approach to COVID-19 vaccines as rich countries have secured the bulk of doses, recalling that it took nearly a decade during the earlier years of the HIV pandemic for a significant number of people on the African continent to access HIV drugs.

“We cannot afford today to have the same pace and time for access to (COVID-19) vaccines,” he said.