After featuring in One Good Thing, volunteers keep on giving 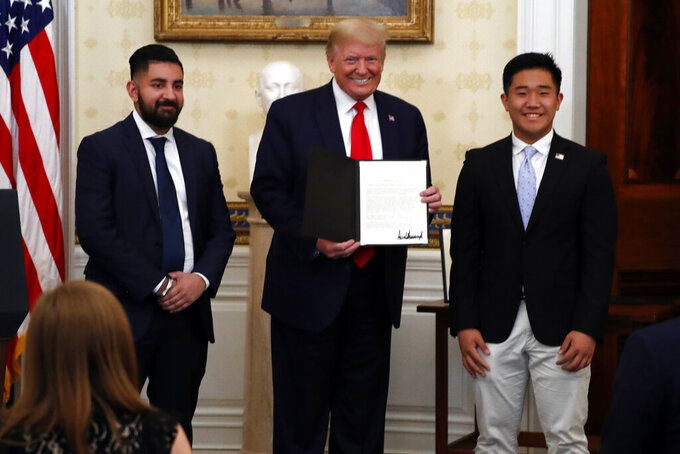 FILE - President Donald Trump poses for a photo with TJ Kim, a sophomore at The Landon School, and Bobby Chahal, who flies TJ in his plane, during an event to honor volunteers helping to battle the coronavirus, in the Blue Room of the White House, Friday, May 1, 2020, in Washington. For more than a year, The Associated Press has been bringing you “One Good Thing” — stories highlighting good deeds done by individuals to brighten others' days during trying times. (AP Photo/Alex Brandon, File)

For more than a year, The Associated Press has been bringing you “One Good Thing” — stories highlighting good deeds done by individuals to brighten others' days during trying times.

Usually, their stories don't end there. They keep volunteering their time, energy and resources to help people in need, even if their own lives were also turned upside down by a pandemic that has killed and sickened millions around the world. Sometimes they've received recognition for their service, or seen support and donations roll in as a result of the publicity.

Today we check in with several of those heroes and update their stories.

In February we brought you the story of Bonifaz Díaz. He biked in and around the Guatemalan highlands city of Quetzaltenango with his saddlebags filled with donated books to barter for an oatmeal-like cereal mix, Incaparina, that an NGO was using to feed nearly 400 children in need.

Díaz is still covering around 90 miles (150 kilometers) per week in the city at a lung-busting 7,640 feet (2,330 meters) above sea level. Mostly, he makes his trips in the morning because it's the rainy season and storms typically roll in in the afternoon. He figures he collects about 80 pounds (36 kilograms) of Incaparina a week, enough to keep the malnutrition program going.

Díaz had worried that the barter donations could dry up as pandemic lockdowns eased in the country, but the opposite turned out to be the case: Donor interest has surged, three other cyclists have joined him since February, and a local cycle shop is now doing maintenance on their bikes for free.

“My fear was that once they started being less afraid (of the coronavirus), people wouldn’t feel as committed,” Díaz said. “But the project has been getting stronger because people participate.”

Even as he hopes to return to work in the coming weeks at the theater company he co-founded — shut down for more than a year due to the pandemic — he intends to keep the barter project up and running.

“I feel that there’s reason for it to exist even without the pandemic," Díaz said. "The problem of child malnutrition is always latent.”

Despite her own coronavirus-related struggles, including a lost job and overdue rent on her martial arts studio, Sofia Moncayo spearheaded a New York City food distribution program as it ballooned to serve hundreds of people suddenly struggling to stave off hunger.

After the AP’s story was published three months ago, more people came forward wanting to support the project, organized through the Mosaic West Queens church and community center, Moncayo said recently by email.

Touring musicians David Shenton and Erin Shields, the subjects of another story, assembled a cast of Broadway stars and celebrities for a benefit concert that raised about $6,000 for the pantry in a single evening, Moncayo said. The Kelly Clarkson Show donated $5,000 for the pantry and also paid for Moncayo, Shields and another volunteer to go on an upcoming vacation to the Bahamas in appreciation for their efforts. And LaGuardia Community College invited Moncayo to speak at 2021 commencement ceremonies.

Moncayo said that with a federal farm-to-families food program ending this month, the pantry is looking to boost its $20,000 monthly budget to $30,000 to keep up with demand.

“The work at the food pantry continues,” she wrote, “and our fundraising efforts are more important than ever.”

TJ Kim, a high school junior and aviator living in McLean, Virginia, was recognized as one of 10 noted youth volunteers in the country. His accomplishment: after-school missions flying more than 90,000 items of gloves, masks, gowns and other personal protective equipment to 20 rural hospitals in Virginia, Pennsylvania, Maryland and West Virginia.

The distinction — awarded during a virtual celebration this month — came with a $7,500 scholarship and a $5,000 grant to a nonprofit of Kim's choice. With India in crisis as the world's pandemic epicenter, he plans to give the grant to an organization doing COVID-19 relief work in the South Asian nation.

Kim devised Operation Supplies Over the Skies, or Operation SOS, as a way to help the community and keep himself active after his lacrosse season was shut down. The response he got from hospital staffers was rewarding, and he plans to continue making deliveries even after the pandemic eases or ends altogether.

“I’ve always said from the beginning that as long as there’s a need," Kim said, "I’m going to keep flying.”