After a long slumber, U.S. cinemas awaken on pivotal weekend 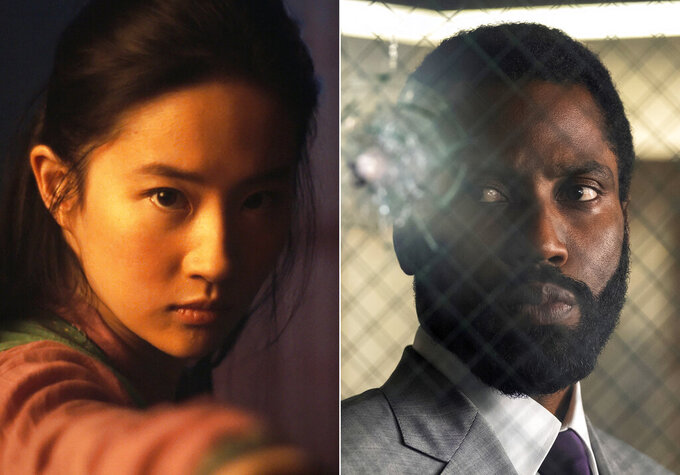 This combination shows Yifei Liu in the title role of "Mulan," left, and John David Washington in a scene from "Tenet." On Thursday, Christopher Nolan’s “Tenet” will arrive in U.S. theaters, the first big movie to head to cinemas since the pandemic began. The next day, Disney’s “Mulan” will try an innovative streaming release. Two divergent paths for the film industry collide in one weekend. (Jasin Boland/Disney via AP, left, and Melinda Sue Gordon/Warner Bros. Entertainment via AP)

STAMFORD, Conn. (AP) — With the previews about to start, a trickle of masked moviegoers made their way into one of the first U.S. screenings of “Tenet” at the Bow Tie Majestic 6 in downtown Stamford, Connecticut. They took their seats Tuesday night, eyeing the empty seats between each other and a little giddy at being back at the movies for the first time in many months.

Philip Scarante and Andy Flores, both 25, went every Tuesday religiously before theaters closed in March. “It’s just our thing,” Scarante said. Seeing Nolan’s latest mind-bending spectacle later on a smaller screen held no appeal. They sat down in center seats, up close.

“Everyone seems to have a mask on,” Scarante noted, looking around in the sparsely populated theater. “I didn’t expect that many people to show up.”

More Americans will make their way back to the movies this weekend than any since the pandemic shuttered theaters in March. After a few weeks of catalog films and minor releases, the $200 million “Tenet” is the first must-see main event of the pandemic, a mega-movie litmus test for how ready U.S. moviegoers are to return to cinemas.

At the same time, another $200 million movie, the Walt Disney Co.’s live-action “Mulan” remake is debuting not in theaters, as it originally intended to back in March, but on the streaming service Disney+. In an innovative, untested release, “Mulan” will be available for $30 only to Disney+ subscribers Friday.

Each movie could chart a new way forward for Hollywood in the COVID-19 era, and potentially beyond. “Tenet,” w hich grossed a hefty $53.6 million in 41 international territories last weekend, could prove that blockbuster moviegoing can be resuscitated with half-capacity theaters and safety protocols -- or that people aren’t ready to sit in the dark with strangers. “Mulan” could open up a new premium on-demand window to the largest film franchises -- or prove that big-time box office (“Mulan” had been projected to make around $750 million in theaters) can’t be replicated in the home.

Labor Day weekend, usually among the sleepiest days of the year in theaters, has turned into a dramatic showdown with maybe the fate of the industry at stake, as two high-priced experiments test the possibilities of a new reality.

“The world we’re in right now, the concept of releasing the film absolutely everywhere for everyone to go and see on the same weekend, clearly that’s absolutely not an option for the foreseeable future,” said Nolan in an interview. “So if that pushes the industry into different ways of thinking and some of them being older distribution models, that hopefully can work.”

Warner Bros. is rolling out “Tenet” where they can. After debuting in Europe, Canada and Korea last weekend, “Tenet” on Thursday lands in the 75% open U.S. theaters, along with cinemas in China on Friday. Some states, like New York, have kept theaters closed, though more are coming online just in time for “Tenet.” New Jersey and some California cinemas are to reopen Friday.

The strong international launch of “Tenet” proved that many people are eager to come back. The U.S., though, may be a different story. Though COVID-19 cases and deaths are declining, they are still far more elevated than in most parts of the world. Cases are approaching six million in the U.S., with deaths surpassing 180,000. Epidemiologists, most more concerned about school re-openings, remain cautious about any large indoor gatherings.

Meanwhile exhibitors are clinging to survival. New product, they’ve said, is essential to their making it through the pandemic. Connecticut’s Bow Tie Cinemas opened earlier this summer and then closed when major releases were again postponed. At the “Tenet” preview screening Tuesday, the married couple Trudy and Phil Davies, with a tub of popcorn between them, said they came for “the chance to do something different" but also to contribute to the recovery.

“We came here to help things get back up and running,” Trudy Davies said. “Not just for the movie businesses, for everybody. As long as it’s done in a sensible way.”

As difficult as the circumstances are, Warner Bros. also sees opportunity. “Tenet” has virtually no competition in cinemas and will play continuously for not just weeks but months. It has the big screen to itself. At one Boston AMC, “Tenet” is playing 86 times from Friday to Sunday.

Disney has released other, smaller films into theaters (Fox’s “The New Mutants” and Fox Searchlight’s “The Personal History of David Copperfield”) but it has thus far either postponed or sent to streaming its bigger movies. Like “Hamilton,” “Mulan” will be used to boost the 60 million-plus subscriber base of Disney+. Announcing the release plan last month, Disney chief executive Bob Chapek called it a “one-off.”

“We don’t see this as a new window, but it’s an opportunity to learn,” Disney’s distribution chief Cathleen Taff said. “The one thing about this pandemic we’ve learned is we can’t be set in our ways. We have to be fluid.”

The move didn’t please theater owners, but Wall Street has endorsed it. Benjamin Swinburne, an analyst with Morgan Stanley, said in a note to investors that he sees premium on-demand “as long-term structurally beneficial to film studios, and likely less cannibalistic to moviegoing than feared.”

Which way things break is anyone’s guess, but the releases of “Tenet” and “Mulan” may go a long way to redefining a movie business in the midst of technological and social upheaval. The movies lying in wait -- “Wonder Woman 1984” (Oct. 2), Marvel’s “Black Widow” (Nov. 6), Pixar’s “Soul” (Nov. 20) -- will be watching.

Settling in for “Tenet,” Jose Alvarez, a 20-year-old from nearby White Plains, New York, was thrilled to be back at the movies.

“Because movies are amazing. We’re saving a lot of money because now we’re at home,” said Alvarez with his mask pulled below his chin. “Not much to do there. Staying inside is not good for the health.”