After shaking off rust, No. 3 Michigan eyes rolling Buckeyes 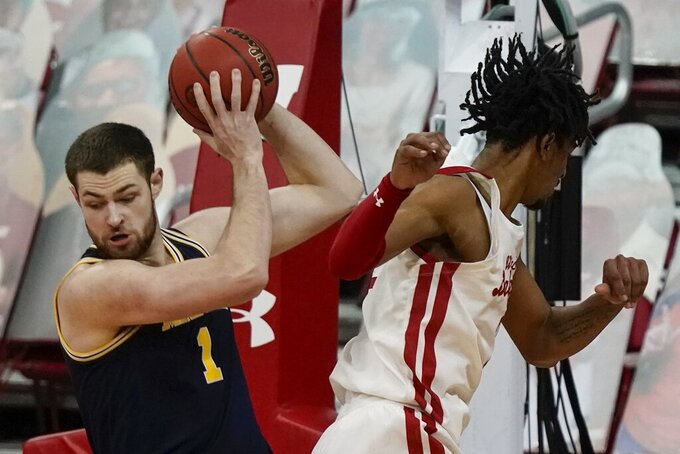 Michigan's Hunter Dickinson gets past Wisconsin's Aleem Ford during the first half of an NCAA college basketball game Sunday, Feb. 14, 2021, in Madison, Wis. (AP Photo/Morry Gash)

GAME OF THE WEEKEND: No. 3 Michigan at No. 4 Ohio State, Sunday: Michigan didn't need much time to shake off the rust from a three-week layoff, and Ohio State is rolling along. Michigan rallied to win at No. 21 Wisconsin 67-59 last Sunday in its first game back. The school had put all activities on hold due to several positive tests for a COVID-19 variant that transmits at a higher rate. The Wolverines host Rutgers in what could be a tough matchup on Thursday. Ohio State has won six straight, the longest active streak in the Big Ten. The Buckeyes visit Penn State on Thursday.

PLAYER TO WATCH: Iowa center Luka Garza continues to make his case for the Naismith Trophy as as college basketball’s most outstanding player. The reigning Big Ten Player of the Year leads the nation in scoring and has more points against Top 25 teams than any other player since the start of the 2019-20 season — 501 heading into Thursday's game at No. 21 Wisconsin. Garza is the only player in Big Ten history with 2,000 points, 800 rebounds, 125 blocked shots, and 100 3-pointers. He is the only player from a major conference to post those numbers dating to the 1992-93 season.

ON THE WOMEN’S SIDE: The Big Ten has five teams in the AP poll, second to the SEC — No. 9 Maryland, No. 11 Michigan, No. 14 Indiana, No. 15 Ohio State and No. 24 Northwestern. Michigan, which matched its highest ranking, has two tough games coming up — at Indiana on Thursday and home against Ohio State on Sunday. ... Big Ten teams were leading the nation in scoring (74 points per game) and field-goal percentage (43.9) through Tuesday. ... The league has two of the nation's top three scorers, with Iowa's Caitlin Clark (26.6 ppg.) second and Michigan’s Naz Hillmon (25.7) third. Iowa’s Monika Czinano is No. 1 in field-goal percentage (67.1), with Hillmon (64.3) second. ... Maryland's Brenda Frese became the third active Big Ten coach — women's and men's — with at least 500 wins at their current school with the Terrapins’ 95-73 victory at Nebraska on Sunday. The others are Rutgers' C. Vivian Stringer and Michigan State men's coach Tom Izzo.