After time off, Nadal back in action with Washington debut 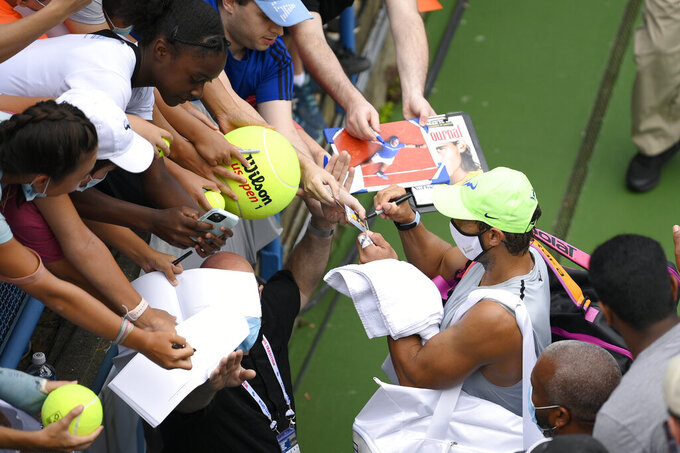 Rafael Nadal, of Spain, signs for fans as he leaves a practice session at the Citi Open tennis tournament, Saturday, July 31, 2021, in Washington. (AP Photo/Nick Wass)

WASHINGTON (AP) — Rafael Nadal is back after missing Wimbledon and the Tokyo Olympics with a previously undisclosed foot problem, back after not lifting a racket for three weeks.

Nadal will return to competition Wednesday night at the Citi Open, making his debut at the hard-court tuneup tournament for the U.S. Open.

And there is no doubt he’s the main attraction, of course — from the sign front-and-center atop the main stadium that shows a yelling Nadal above the words, “This is tennis,” to the crowds attending his open practice sessions this weekend.

After losing to Novak Djokovic on June 11 in the semifinals of the French Open, where Nadal is a 13-time champion, the 35-year-old Spaniard decided to take a break.

Or, as Nadal put it during a video conference with reporters Sunday, “My body decided.”

“If I had to choose, I will never miss Wimbledon and Olympics. But I was not able to compete in these events after the clay-court season. I had some issues in my foot, so I had to stop playing tennis for around 20 days, not touching a racket for 20 days,” he said. “I started slowly, practicing half an hour, then a little bit more. So I went through the whole process.”

Does he regret taking all of that time away from the tour, particularly sitting out the fortnight at the All England Club, where Djokovic pulled even with Nadal and Roger Federer by winning a 20th Grand Slam singles title?

“That’s the right thing to do,” Nadal said. “The decision, I think, is the right one.”

Coming to the nation’s capital for the first time allows Nadal to start his preparation for the U.S. Open a week earlier than he usually does.

“It’s just unbelievable that he came here to D.C.,” Tiafoe said. “Having a player of his caliber here is pretty legendary.”

Nadal has won the championship at Flushing Meadows four times, including when he most recently entered the tournament, in 2019.

He sat the U.S. Open out a year ago, when it was played with zero spectators amid the pandemic.

When Nadal returns there in less than a month, he will be trying to break a tie with Federer and Djokovic by becoming the first man to get to 21 major trophies.

The work toward that goal has commenced.

“I don’t know how long it will take to recover everything, but the only thing I can say is I’m here just to try my best in every single moment,” Nadal said. “I hope the last couple of days of practices keep helping me to be competitive enough for the first round.”