After tumultuous year, can Portland make a comeback? 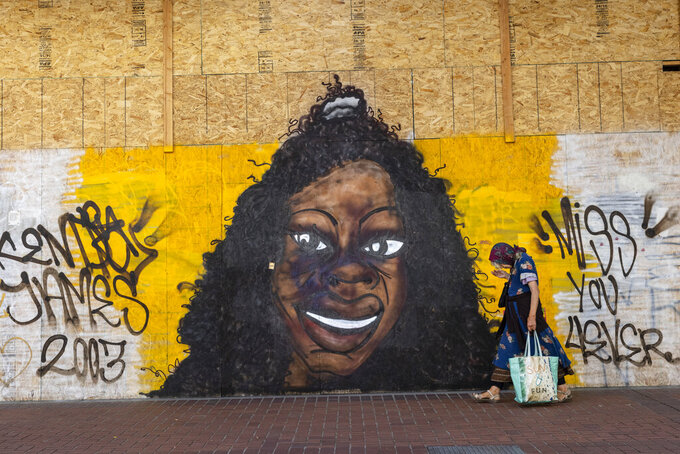 A woman carrying a shopping bag walks by Black Lives Matter artwork posted on wooden panels that barricade shops because of on-going protests in downtown Portland, Ore., on Saturday, June 5, 2021. Until a year ago, the city was best known nationally for its ambrosial food scene, craft breweries and “Portlandia” hipsters. Now, months-long protests following the killing of George Floyd, a surge in deadly gun violence, and an increasingly visible homeless population have many questioning whether Oregon’s largest city can recover. (AP Photo/Paula Bronstein)

PORTLAND, Ore. (AP) — The smell of fresh empanadas wafted through the stands at Portland's Saturday Market. People talked through their masks with artists as others sifted through fork windchimes, crystal necklaces, tie dye dresses and clay mugs.

The weekly event was smaller than in years past, but longtime attendees say it was a sign of life being breathed back into downtown.

Nine blocks away, past businesses still shuttered with plywood boards — the names of Black people killed by police painted onto them — a panhandler leaned against a fence outside the federal courthouse in an area that was choked with tear gas last summer as thousands of protesters seized the streets. It's now overwhelmed by a makeshift homeless camp.

The scenes are from a city trying to emerge from one of its most wrenching periods, one that saw its reputation go from quirky “Portlandia” to violent dystopia in the minds of many on the outside looking in.

The Pacific Northwest city had best been known nationally for its ambrosial food scene, craft breweries and nature-loving hipsters.

But last year, as a portion of its downtown was consumed by nightly protests that often turned violent and resulted in clashes with federal agents, former President Donald Trump and his administration labeled Portland an “anarchist jurisdiction.”

“It does feel kind of like someone dropped a bomb in some areas (of Portland), but I think they’re very contained areas,” said Ocean Howell, a professor at the University of Oregon who teaches urban history and planning. “I think there’s likely some businesses that are gone and aren’t coming back. And there are just some people, generally, who are kind of spooked from everything.”

City officials insist Portland is resilient as they launch a revitalization plan — in the form of citywide cleanups of protest damage, aggressive encampment removals, increased homeless services and police reform — to repair its reputation.

When the pandemic reached Portland in March 2020, businesses boarded up, turned off neon “open” signs and sent employees home.

“A year ago, when we were at the end of the longest economic expansion in post World War history in this country. We had 100,000-plus individuals coming in and out of downtown daily,” said Andrew Hoan, president and CEO of the Portland Business Alliance. “And then, overnight, they disappeared.”

Portland’s signature events, such as its Rose Festival, brew fests and drag shows, were canceled, postponed or held virtually. Tourists shied away. No other part of the city was so obviously altered as downtown, which saw an 80% decrease in foot traffic, based on a study conducted by the Portland Business Alliance.

A year later there are still “pockets” in the city that seem frozen in a scene from six months ago. However, officials say there is hope and already noticeable signs of recovery.

Gov. Kate Brown has begun to lift some of the country’s strictest COVID-19 restrictions, and restaurants and bars have expanded capacity. The state has set a goal to completely reopen the economy by the end of June or early July.

“We’re in a virtuous cycle now, where one element feeds the other,” Hoan said, noting customers are again lining up outside the famous Powell’s Books and fans are returning to Timbers’ soccer games.

While all cities have dealt with the impact of COVID, Portland faced additional challenges over the past year — from a large homeless population, to nearby “once-in-generation” wildfires, to winter ice storms that left tens of thousands without power. But the events that challenged the city’s reputation the most was political violence on top of racial awakening.

The Rose City was thrust into the national spotlight over the summer as people attended nightly racial justice protests. Photos of thousands of people laying on the historic Burnside Bridge for eight minutes and 46 seconds in remembrance of George Floyd captivated the nation.

But as time passed, scenes of chaos emerged: violent clashes between protesters and federal agents sent by Trump. In late August, a Trump supporter was shot and killed downtown when a large caravan of Trump supporters and Black Lives Matter protesters clashed in the streets.

Even with most protests taking place within a few blocks, news of the mayhem stretched across the country.

“And we’re dealing with the consequences now," he said.

Protests continue in the city and sometimes turn violent, but that activity is concentrated in small areas.

Based on a survey conducted by the city last month, 68% of people said their top reason for not visiting was due to riots and protests.

In addition, the mayor’s office has launched a reputation and rebranding effort.

“We’re doggedly determined to recover,” Mayor Ted Wheeler said in his State of the City address this year. “Our community has what it takes to move forward to a much greater future.”