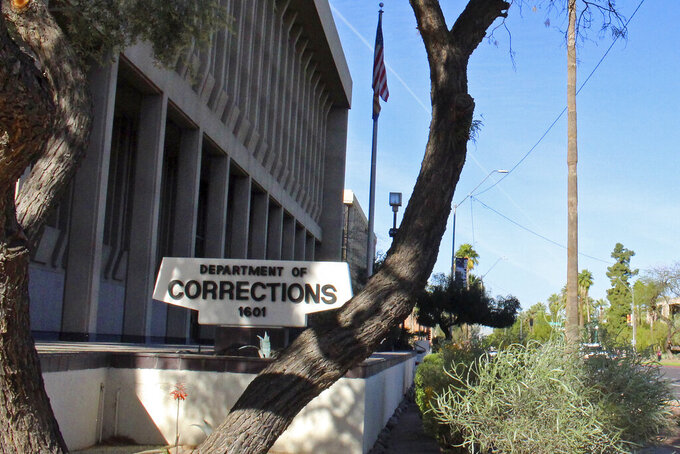 FILE - In this March 16, 2016, file photo, is the Arizona Department of Corrections, Rehabilitation and Reentry headquarters in Phoenix. Prison officials will start offering COVID-19 vaccinations on Friday, Jan. 15, 2021, to corrections officers at the Perryville prison in Goodyear, with other prisons to follow in the future. State corrections officers can get vaccinated through either the corrections department or through counties where they work, some of which are already making vaccines available to them. (AP Photo/Bob Christie, File)

PHOENIX (AP) — Arizona prison officials started offering COVID-19 vaccinations Friday to corrections officers at the Perryville prison in Goodyear, with other prisons to follow in the future.

State corrections officers can get vaccinated through either the Arizona Department of Corrections, Rehabilitation and Reentry or through the counties where they live. Some counties have already made vaccines available to officers.

Centurion of Arizona, the company that provides health care for state prisoners, also has received vaccines and plans to begin offering them to its employees on Monday at the Perryville prison, though many of Centurion’s providers have already received it, officials said.

It’s unknown exactly when vaccines will be offered to the 37,000 state prisoners. Corrections officials say the timeline for inmate vaccinations depends on the amount of vaccines the department receives and when it gets them.

In county jails across Arizona, several sheriff’s offices said they have already begun offering the vaccine to jail officers. It’s unknown exactly when county jail inmates will get vaccinations.

Arizona remains the state with the worst COVID-19 diagnosis rate, with 1 of every 111 residents being diagnosed with COVID-19 over the past week.

There were 4,866 hospitalized COVID-19 patients occupying inpatient beds statewide, down from Monday's pandemic-high of 5,082.

State prisons and some county jails in Arizona have been hard hit by the virus.

Nearly 2,200 people who work in state prisons also have tested positive. Corrections officials declined to say whether any staff members have died from the virus, and leaders of the unions representing state corrections officers didn’t respond to requests for comment.

Earlier in the pandemic, state corrections officials were harshly criticized for not providing masks to inmates and for a scarcity of virus tests. Inmates were given masks in July, and for the second time authorities are planning to start an effort Tuesday to test all inmates in state prisons for the virus. The corrections department has repeatedly said its top priority is keeping staff, inmates and communities near prisons safe from the virus.

Advocates for inmates had accused corrections officials of neglecting prisoners and called for incarcerated people from around the state to be released to try to control the spread of the virus behind bars.

Gov. Doug Ducey rejected the calls for the early release of some state inmates. Last year, at least 300 non-violent inmates were released from county jails across Arizona, though about half of Arizona’s counties didn’t release inmates as a virus prevention measure.

Corene Kendrick, an American Civil Liberties Union attorney who represents thousands of inmates in a nearly 9-year-old lawsuit challenging the quality of health care in Arizona’s prisons, said the lack of social distancing and inadequate medical services for prisoners still make them “sitting ducks” for the virus.

Kendrick said vaccinating prisoners and corrections employees will help protect the public, noting that people who work in prisons could end up bringing the virus into prisons or transmitting into their communities after they knock off work. “They are bringing it to their families and grocery stores,” Kendrick said. “We are all interconnected.”

Lillian Coppess, leader of an advocacy group consisting of the loved ones of incarcerated people in Arizona, said she is concerned about prisoners declining to get vaccinated based on a false belief that the government is using them for medical experiments.

“Sometimes, their family members tell them not to take it,” Coppess said.

Corrections officials say employees and inmates aren’t required to take the vaccine, but they are encouraging them to do so. ___