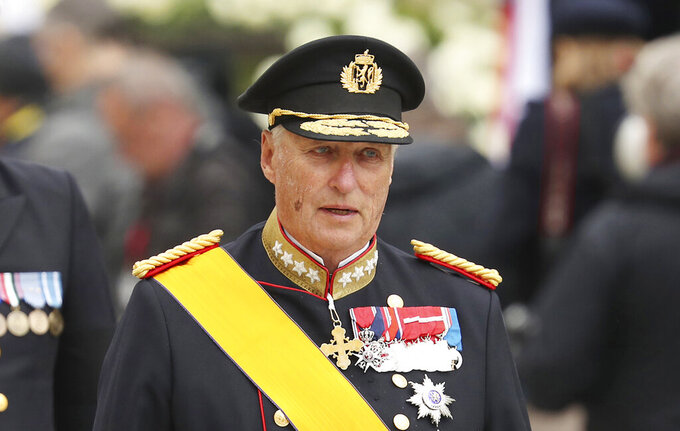 FILE - In this Saturday, May 4, 2019 file photo, King Harald V of Norway and his wife Sonja leave the Notre Dame cathedral after attending at the funeral of the Grand Duke Jean of Luxembourg, in Luxembourg. The Norwegian palace reported on Friday, Sept. 25, 2020 that the country's popular 83-year-old king, Harald V, has been admitted to the main hospital in Oslo. It gave no information about his condition. Harald, the country’s first native-born king since the 14th century, ascended the throne upon the death of his father King Olav in 1991. (AP Photo/Francisco Seco, File)

COPENHAGEN, Denmark (AP) — Norway’s 83-year-old King Harald V was admitted to the main hospital in Oslo on Friday with breathing difficulties, the Norwegian palace said. It added that he tested negative for COVID-19.

The palace said his son, Crown Prince Haakon, has stepped in and taken over his father’s duties, including a scheduled meeting with the Norwegian government.

“The king is now being examined. COVID-19 is already excluded,” the palace said in a later statement.

Harald ascended the throne upon the death of his father King Olav on Jan. 17, 1991.

The country’s first native-born king since the 14th century, he married a commoner as a prince and won hearts in his egalitarian country by leading the mourning in 2011 for the victims of mass killer Anders Behring Breivik.

In 2016, a speech by Harald in support of gay rights and diversity attracted widespread international attention. “Norwegians are girls who love girls, boys who love boys, and girls and boys who love each other,” he said.

The speech was shared tens of thousands of times on social media.

Earlier this year, Harald was briefly admitted to Rikshospitalet, the capital's university hospital, after experiencing dizziness. No serious illness was found, but the monarch was on sick leave for two weeks.