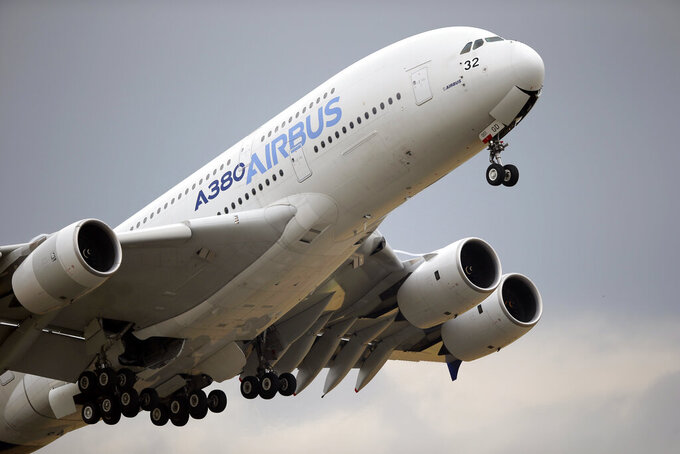 FILE - In this June 18, 2015, file photo, an Airbus A380 takes off for its demonstration flight at the Paris Air Show in Le Bourget airport, north of Paris. European plane maker Airbus lost 1.1 billion euros ($1.3 billion) amid an unprecedented global slump in air travel because of the pandemic, but expects to deliver hundreds of planes and make a profit this year. (AP Photo/Francois Mori, File)

PARIS (AP) — European plane maker Airbus lost 1.1 billion euros ($1.3 billion) last year amid an unprecedented global slump in air travel because of the pandemic, but expects to deliver hundreds of planes and make a profit in 2021 despite uncertainty about when people will resume flying en masse.

Airbus is also pushing to negotiate a “cease-fire” soon in its years-long trade dispute with U.S. rival Boeing, amid hopes that the Biden Administration will be more amenable than Trump's government to a deal. The dispute has led to billions of dollars in tit-for-tat cross-Atlantic tariffs on planes, cheese, wine, video games and other products.

Airbus CEO Guillaume Faury acknowledged Thursday that the company’s performance last year was “far from expectations” and had to constantly adapt as airlines grounded planes — or folded altogether — because of travel restrictions. Airbus announced in June that it would cut 15,000 jobs, mostly in France and Germany.

“The crisis is not over. It is likely to continue to be our reality throughout the year,” Faury said. “Airlines will continue to suffer” and to “burn cash,” he warned.

Airbus doesn’t expect the industry to recover to pre-pandemic levels until 2023-2025, and when it does, Airbus predicts that environmental concerns will be ever more important to passengers and airlines, so it's increasing investment in hydrogen and lower-emissions aircraft.

Airbus sales were down to 49.9 billion euros from 70 billion euros the year before. The company also reported a loss in 2019 because of a major multinational corruption settlement.

Airbus delivered 566 aircraft last year and expects to deliver about the same number this year, the company said. It took in 268 commercial plane orders, down from 768 the year before.

Both figures were well down from normal recent years, but above those from struggling Boeing.

Boeing Co. got a bump in orders and deliveries of new planes in December, but it wasn’t enough to salvage the year. It notably suffered from continuing cancellations of its 737 Max jet, which was grounded for 21 months after crashes in Indonesia and Ethiopia killed 346 people.

With both plane makers facing a long and difficult recovery, the Airbus chief executive called the U.S.-EU tariffs a “lose-lose situation” for everyone. The tariffs stem from a dispute over state subsidies to both Airbus and Boeing that each side calls unfair.

After trade tensions worsened under Trump's presidency, Faury said, “We believe the situation is in place to start with a cease-fire, to suspend tariffs, to hold negotiations and move forward."

Airbus welcomed one bit of good news last year: a negotiated agreement between Britain and the EU to reduce trade disruptions after Brexit was finalized Dec. 31. Faury insisted Thursday that Airbus' U.K. plants “have a very, very important role to play moving forward for Airbus.”

Overall, however, the outlook remains bleak for the aviation industry.

Also Thursday, Air France-KLM announced it plunged to a 7.1 billion euro ($8.5 billion) loss in 2020, as travel restrictions and worries caused a 67% fall in passenger numbers at the French-Dutch airline. CEO Ben Smith said the carriers now are looking for an improvement in 2021 “as soon as vaccination is deployed on a large scale and borders once again reopen.”