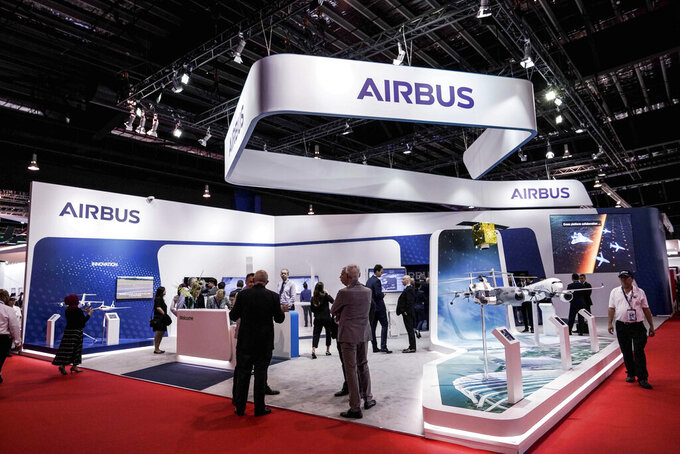 FILE - In this Tuesday, Feb. 11, 2020 file photo, visitors are seen at the booth of Airbus during the opening trade day of the Singapore Airshow 2020 in Singapore. European aircraft manufacturer Airbus says it plans to shed 15,000 jobs over the next year, with jobs mostly being lost in Europe. Airbus is struggling with the financial hit of the coronavirus pandemic. It said Tuesday, June 30 that it doesn't expect air traffic to recover to pre-COVID levels before 2023 and potentially as late as 2025. (AP Photo/Danial Hakim, file)

PARIS (AP) — Battered by the coronavirus pandemic, European aircraft manufacturer Airbus said Tuesday that it must eliminate 15,000 jobs, mostly in Europe, to safeguard its future and warned of more thin years ahead.

“With air traffic not expected to recover to pre-COVID levels before 2023 and potentially as late as 2025, Airbus now needs to take additional measures,” the company said in a statement.

Airbus said it wants to start making the cuts within months, from this autumn. It will aim for voluntary departures and early retirements, but also said that compulsory job losses can't be ruled out. It said is already consulting with unions.

“The path to recovery will prove slow and fragile and a large amount of uncertainty still lies ahead,” the company’s CEO, Guillaume Faury, said in a videotaped statement. “We must act now to safeguard Airbus and protect its future.”

Airbus said its commercial aircraft business activity has plummeted by close to 40% as the pandemic has shut borders, brought mass tourism to a screeching halt and put airlines on their knees, thumping the European manufacturer and its rival Boeing.

Airlines around the world are forecast to lose $84 billion this year, with revenue halved. Some have filed for bankruptcy or sought bailouts to survive the near-shutdown in their activity, and officials predict the industry will take years to recover.

Slashing the production of commercial aircraft and putting thousands of employees on furlough bought Airbus time in the early stages of the crisis. But those measures weren't enough to keep Airbus viable long-term, Faury explained. Airbus reported 481 million euros ($515 million) in losses in the first quarter.

"We need to act now, by adapting our workforce,” Faury said.

“Airbus is facing the gravest crisis this industry has ever experienced,” he said. “The measures we have taken so far have enabled us to absorb the initial shock of this global pandemic. Now, we must ensure that we can sustain our enterprise and emerge from the crisis as a healthy, global aerospace leader.”

The job eliminations come despite a 15-billion euro ($16.9 billion) rescue package announced by the government earlier this month for France's aerospace industry, in hopes of saving jobs and keeping Airbus and national airline Air France competitive.

The aid includes 7 billion euros in loans and loan guarantees that the government had already promised to Air France, whose planes were almost entirely grounded by the virus.