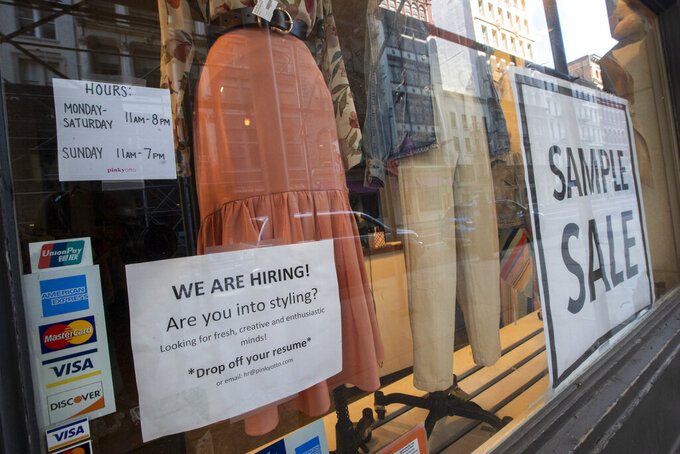 An old sign announcing they are hiring hangs in the window of a closed store along Broadway, Thursday, May 7, 2020, in the Soho neighborhood of Manhattan in New York. Nearly 3.2 million laid-off workers applied for unemployment benefits last week as the business shutdowns caused by the coronavirus outbreak deepened the worst U.S. economic catastrophe in decades. (AP Photo/Mary Altaffer)

The outbreak of the coronavirus has dealt a shock to the global economy with unprecedented speed. Following are developments Thursday related to national and global response, the work place and the spread of the virus.

TRAVEL & LODGING: All aspects of travel, road, rail and air, have been transformed during the pandemic. Many hotels remain vacant.

— JetBlue Airways swung to a $268 million loss in the first quarter. It made a $42 million quarterly profit last year. Revenue slumped 15%. President Joanna Geraghty said bookings remain “extremely limited.” The New York carrier said Thursday that after negotiations with Airbus, it cut $1.1 billion in aircraft expenses through 2022. It’s taking $936 million in federal relief and has applied for another $1.1 billion in loans from the U.S. Treasury.

— Air France-KLM suffered a first-quarter loss of 1.8 billion euros, but predicts the second quarter will be far worse, with traffic down 95%.

The airlines, which have already won billions of euros in bailouts from the French and Dutch governments, expect some resumption of summer travel, but numbers will still likely be down 80% in the third quarter.

— The nation’s biggest union of airline pilots is pushing for federal regulations covering the cleaning of airplanes. Joe DePete, president of the Air Line Pilots Association, told The Associated Press there is a patchwork across the industry, with some airlines doing a good job while “others aren’t doing so well.” The union says three of its members have died and more than 300 pilots have tested positive for the virus that causes COVID-19.

— About 60% of Hilton hotels worldwide — or around 950 properties — have suspended operations. However, global occupancy levels, which slumped to 13% in March, have reached 23%. Nearly all of the 150 hotels closed in China during the height of the pandemic have reopened, and Hilton says occupancy reached 50% last weekend during the May Day holiday.

HOUSING: The real estate market was still cruising in the spring, but the virus has almost shut down activity in the sector.

— Mortgage credit availability fell in April, as lending standards tightened. It's the second consecutive month in retreat. The Mortgage Credit Availability Index dropped by 12.2% to 133.5 last month, according to a Thursday report from the Mortgage Bankers Association.

— Google is abandoning its smart-city development in Toronto, blaming unprecedented economic uncertainty. A unit of Google’s parent company, Alphabet, had been proposing to turn a rundown part of Toronto’s waterfront into a wired community, but Dan Doctoroff, Sidewalk Labs chief executive, said Thursday that its no longer financially viable. Sidewalk Labs had partnered with a government agency known as Waterfront Toronto with plans to erect mid-rise apartments, offices, shops and a school on a 12-acre (4.9-hectare) site — a first step toward what it hoped would eventually be a 800-acre (325-hectare) development.

RELIEF CHECKS: The IRS has updated its guidance, saying that relief payments made to the deceased must be returned to the federal government.

Due to a lag in reporting data, some of the more than 130 million economic impact payments that went out to taxpayers as part of an economic relief package were sent to people who are dead. In the case of couples who file jointly, only the portion of payment sent to the deceased needs to be repaid. The IRS also says that any check sent to someone incarcerated should also be returned.

The IRS and Treasury did not say what would happen if these payments were not returned or otherwise repaid.

CENTRAL GOVERNMENTS & BANKS: Countries are trying to keep their economies afloat while, at the same time, addressing the needs of millions of the newly unemployed.

— Norway’s central bank is dropping a key interest policy rate to 0% after another 0.25 percentage points cut.

— Indonesia has posted its slowest growth in more than two decades as the coronavirus crisis made its effects felt in exports, investment and consumption in Southeast Asia’s largest economy. Gross domestic product expanded by only 2.97% in January-March, down from a 4.99% expansion last year in the same period.

— The Czech Republic’s central bank has lowered its key interest rate by a three quarter-point to 0.25% to help reduce the impact of the pandemic on the economy.

Thursday’s move comes after the bank cut the rate twice in March.

— Regional governors in Italy are pressing to open more segments of the economy — namely shops and restaurants — just days after the country began easing its two-month lockdown. Governors want to submit their own plans for reopening, tailored to the rate of infection and economic needs of their regions.

MARKETS: — Stocks climbed on Wall Street Thursday as reports suggested that even though the economy is still getting walloped, at least conditions aren’t worsening as quickly as they had been.