AL East teams at the start of spring training 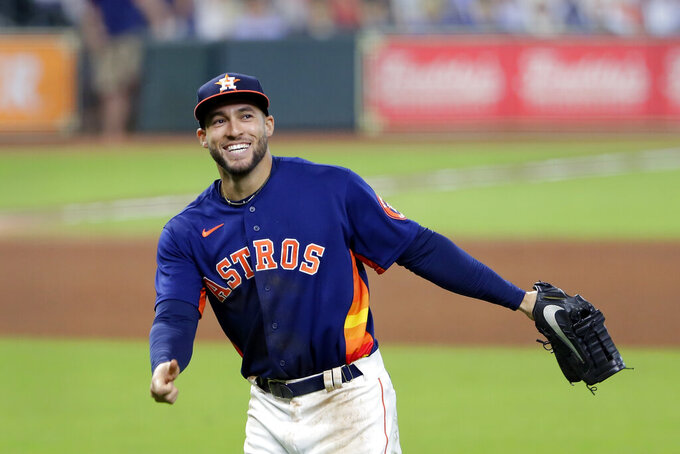 A team-by-team look at the American League East entering spring training, including key players each club acquired and lost, and dates of the first workout for pitchers and catchers, and the full squad:

Going campin’: The AL champions are coming off their first division title in a decade and first World Series appearance in 12 years, but they have to replace their top two starting pitchers after declining a $15 million option on Morton and trading Snell to San Diego. The Rays are counting on RHP Tyler Glasnow to step up into a leading role, and former All-Stars Wacha and Archer signed as free agents to compete for spots in a revamped rotation. Patiño, a prized prospect acquired for Snell, could also earn a spot. A versatile lineup will be largely the same, with young OF Randy Arozarena getting more playing time after a breakout postseason and Cash continuing to make liberal use of a deep bench. The offense averaged 4.82 runs per game during the pandemic-shortened 2020 season, its best showing in 10 years, but the Rays remain a team built on pitching and defense. A major league-high 12 pitchers earned saves last season, tying a big league record. Rays pitchers posted a 3.56 ERA — third in the majors behind the Dodgers (3.04) and Indians (3.29).

Going campin’: A new-look rotation includes Kluber and Taillon, high-risk additions who due to injuries have combined for one inning since May 1, 2019. They join ace Gerrit Cole, RHP Deivi García and LHP Jordan Montgomery, with RHP Michael King a contender. RHP Luis Severino is expected back this summer following Tommy John surgery last Feb. 27. New York allowed Tanaka to return to Japan after seven seasons in pinstripes and also did not re-sign Paxton or Happ. 3B Gio Urshela is recovering from surgery Dec. 4 to remove a bone chip from his right elbow, a procedure with an anticipated recovery time of three months. 1B Luke Voit had a platelet-rich plasma injection to treat plantar fasciitis in his left foot after leading the majors in home runs. 2B DJ LeMahieu re-signed for $90 million over six years after becoming the first player to win undisputed batting titles in both leagues. RF Aaron Judge and DH Giancarlo Stanton are trying yoga after both missed a majority of their second straight season due to injuries. Focus will be on C Gary Sánchez, who struggled at the plate for the third straight year, hit a career-worst .147 and was benched in favor of Kyle Higashioka for four of five Division Series games. New York is seeking to be more consistent: The pandemic-shortened season included a 16-6 start followed by a 5-15 slide, a 10-game winning streak and six losses in the last eight games. The Yankees were 22-9 at home and 11-18 on the road. A long-ball dependent offense scored 156 of 315 runs on homers.

Going campin’: The Blue Jays signed free agent Springer to the richest deal in club history, $150 million over six years, adding veteran leadership to a youthful, talented team that earned a wild card in last year's expanded postseason format. In Toronto’s young core, Springer said he saw echoes of the Astros group he played with that won the 2017 World Series. Semien, who signed an $18 million, one-year deal, is another playoff veteran for young sluggers Vladimir Guerrero Jr., Bo Bichette, Teoscar Hernandez, Lourdes Gurriel Jr. and Cavan Biggio to emulate and learn from. LHP Hyun Jin Ryu leads the pitching staff, and free agent Yates appears to be the likely closer, but questions remain about Toronto’s rotation depth. The Blue Jays also head into spring training unsure where they’ll play regular-season games, with the coronavirus pandemic keeping the U.S.-Canada border closed to non-essential travel. An extended stay in Florida is one possible outcome for the Blue Jays, who just opened a state-of-the-art training complex a short drive from their spring training stadium.

Going campin’: Although the Orioles appeared to make some progress last year following two straight 100-loss seasons, general manager Mike Elias remains focused on long-term stability in his effort to slash the payroll and rebuild the franchise with draft picks and prospects obtained via trades for veteran talent. The offseason trades of Cobb and Iglesias, along with the willingness to part with Alberto and Nunez, means 2021 will serve merely to groom several of the younger players. Hyde will monitor that talent in spring training while seeking to build a rotation and a bullpen without a whole lot of major league experience. The pending return of OF/1B Trey Mancini following his bout with cancer projects as one of the feel-good stories in a camp that otherwise will feature a bunch of players looking to make a positive impression by showing their potential as big leaguers. The exception is 2010 AL Cy Young Award winner Hernández, who’s looking to earn a job at the front of the rotation with 2019 All-Star John Means.

Going campin’: Last year was a lost season for the Red Sox. Just two years removed from their fourth World Series championship in 15 seasons, the team fired Cora in the wake of the Houston sign-stealing scandal, and traded 2018 AL MVP Mookie Betts and 2012 AL Cy Young Award winner David Price to the Dodgers in a salary dump. The Red Sox were also without LHP Chris Sale, who missed the entire season recovering from Tommy John surgery, and Eduardo Rodriguez, who was out with heart inflammation caused by COVID-19. Roenicke, promoted from bench coach after players started reporting to spring training, didn’t have much of a chance. So the Red Sox moved on and called on Cora, who served his one-year suspension for his role in the Astros scandal. The team’s best hope of getting out of the cellar of the stacked AL East in 2021 is that he relights a spark in J.D. Martinez and Rafael Devers, who both struggled during the pandemic-shortened season; Rodriguez returns strong and Sale is able to recover by midseason. The retirement of Pedroia, who played only nine games in the past three years, provides clarity at second base and opened a spot that Hernández should fill. SS Xander Bogaerts is signed to a long-term deal and could become the star future teams are built around. Or, he could become the next Betts. CF Alex Verdugo, the biggest acquisition in the Dodgers deal, is also a piece for the future. JetBlue Park will open at about one-fourth capacity, around 2,400 fans each game.