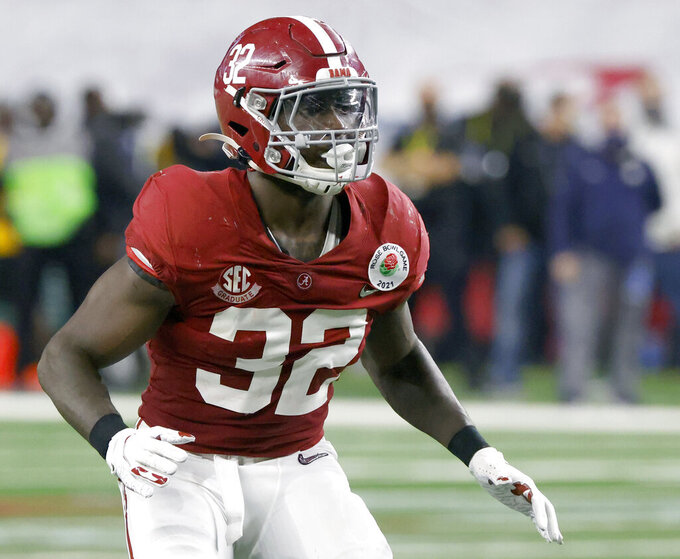 Alabama linebacker Dylan Moses (32) plays against Notre Dame during the Rose Bowl NCAA college football game in Arlington, Texas, Friday, Jan. 1, 2021. In a recent Instagram post, Moses detailed his struggles with physical problems “fighting through pain every single game” and disclosed his grandmother's death. “It’s been times I wanted to quit and times I wanted to walk away from my dreams,” he posted. (AP Photo/Ron Jenkins)

Alabama middle linebacker Dylan Moses has had to overcome personal struggles off the field and now all his perseverance is paying off.

He has had to deal with lingering pain from a knee injury that cost him a season, and with his grandmother's death.

Now Moses is the leader of the Crimson Tide's youthful defense that will try to corral Justin Fields and No. 3 Ohio State in Monday night’s national championship game in South Florida.

Moses, who said the pain from the knee injury was constant for awhile and the loss of his grandmother to COVID-19 cut deeply, opened up in a recent Instagram post about his personal struggles during the pandemic. Moses said he wasn't looking to elicit sympathy but to help kids or other athletes who are going through struggles.

Moses said on social media that there were times he wanted to walk away from football. Alabama is glad he didn't.

The 2018 Butkus Award finalist missed last season with a knee injury suffered during the preseason.

Moses returned for his senior season instead of declaring for the NFL draft, hoping the injury wouldn't drop his stock too far. Then came the pandemic that put the college football season in jeopardy.

Moses, and the Tide, played through. He was a third-team Associated Press All-American, leading the team with 74 tackles.

Moses also is the primary defensive play caller and the leader of a defense that leans heavily on freshmen, including linebacker Will Anderson and defensive backs Malachi Moore and Brian Branch.

“I don’t think there’s any question about the fact that when Dylan Moses plays for us, he makes everybody around him play better,” Alabama coach Nick Saban said. “He makes all the calls on defense. I think the players have confidence in him and his understanding of the system and the scheme.

“So I think he does enhance the confidence of the rest of the group because of his leadership, his knowledge, and his command of what we’re doing on the field when he’s in there.”

Saban and Moses have built a relationship the player likens to “a great uncle” over the years. Saban famously offered him a scholarship when Moses was an eighth-grader, after Les Miles, then coach of his hometown LSU, had already done so.

Years before becoming one of the nation's top recruits, Moses was even featured on the cover of ESPN The Magazine.

Now, barring a decision to take advantage of an NCAA rule allowing seniors to return for another season because of the pandemic, Moses is set to line up for the Tide one final time.

“He’s a great kid, and I’m proud of the way he’s fought through it this year and battling injuries and everything else,” Golding said. “He’s done a really nice job of that, and I think that’s the one thing obviously I’ve been most impressed with, is when he’s here, — he’s in the building, he’s on the field — he’s locked in.”

Moses will be a big factor in Alabama’s ability to contain Fields, who is dangerous both passing and on the move. Buckeyes tight end Luke Farrell praises Moses for both his play and his play calling.

“They’re really well coached and he’s really smart with the adjustments they make on the field,” Farrell said. “He plays really hard.

“He’s not afraid to come put his face in there and hit you. From both those aspects, I think he does a really good job."

Moses turned to social media last weekend to detail his struggles, posting about “fighting through pain every single game” and his grandmother's death, which he attributed to the coronavirus.

Moses wrote that family and teammates were what kept him going.

“God has tested my Faith on numerous occasions, but I kept moving forward. He’s showed me strengths in myself that I didn’t even know was there until this past year. ”