Alaska allows some businesses to reopen with limitations 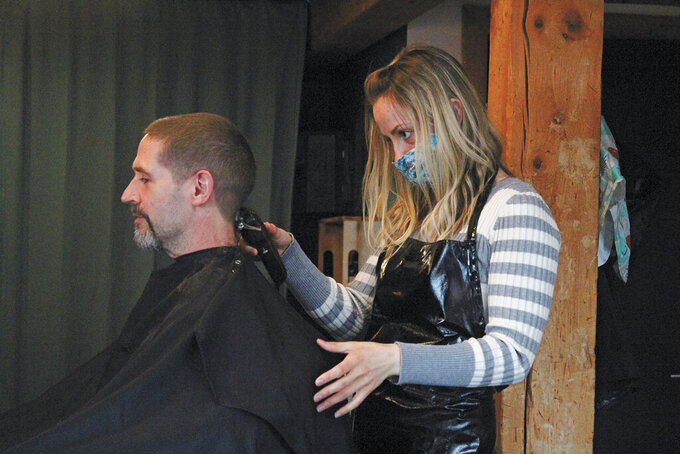 Ashley Story gives a haircut to client Michael Halstead on Friday, April 24, 2020, at her salon Short Cuts in Homer, Alaska. Story's is one of several Homer businesses to reopen their doors Friday according to relaxed state restrictions, while several others have opted to wait. (Megan Pacer/Homer News via AP)

In Juneau, whose downtown core typically hums this time of year, many storefronts remained dark. The city earlier Friday urged businesses to wait to commit to reopening until the Assembly on Monday considers whether to “moderate” Dunleavy's reopening approach.

Alaska is among the first states in the West to begin reopening, allowing restaurants to resume dine-in service and retail shops, personal care services and other businesses that were classified as nonessential to operate, all with limitations. Dunleavy, a Republican, has said health considerations must come first and that officials feel good about Alaska's numbers, health care capacity, equipment and ability to track cases.

The state has reported fewer than 350 cases of COVID-19, which includes 208 recovered cases, and nine deaths.

For most people, the coronavirus causes mild or moderate symptoms. For some, especially older adults and people with existing health problems, it can cause more severe illness, including pneumonia and death.

The state believes it can maintain the health of Alaskans while beginning to reopen the economy, Dunleavy said Thursday. “And the near future's going to determine whether that call is correct. And, again, we think it is, as long as we follow the science and the data,” he said.

The state's order restricts how many people can be in a restaurant, barber shop or other public-facing businesses and outlines protocols for face coverings and sanitation. For personal care services, such as salons and tattoo shops, there can be no waiting areas.

Some reopenings were met eagerly. Homer hairstylist Ashley Story said she had Friday booked. She told the Homer News people wait in their cars until she signals for them to enter.

A regular customer was waiting at Airport Way Family Restaurant in Fairbanks when it opened at 7 a.m., Fairbanks television station KTVF reported.

Alice Camacho and William Hawkins went to Bishop’s Jewelry Gallery in Fairbanks to find rings for their wedding, also set for Friday, the station reported.

“I’m pretty pregnant, so we’re trying to get married before he comes, and William just came back from Iraq, so it seemed like a good time,” said Camacho. Hawkins is stationed at Fort Wainwright, KTVF reported.

In Juneau, barber Rhonda Adams was adjusting to a mask, which sometimes caused her glasses to fog. She said she was excited to return to work and felt good about the protocols in place.

Alicia Smith, owner of the specialty toy store Juneau's Imagination Station, has been doing curbside pickup and planned for limited store hours starting Tuesday. She is considering capping the number of people inside the store below the state's guideline due to the shop's narrowness.

The Juneau Empire reported a downtown photo store owner was preparing to close up shop but still work from a personal studio.

Patrick Krier, owner of the Polar Cafe in Nome, has been doing takeout orders and said he's following the city's recommendation and working to prepare the restaurant to resume a level of onsite dining.