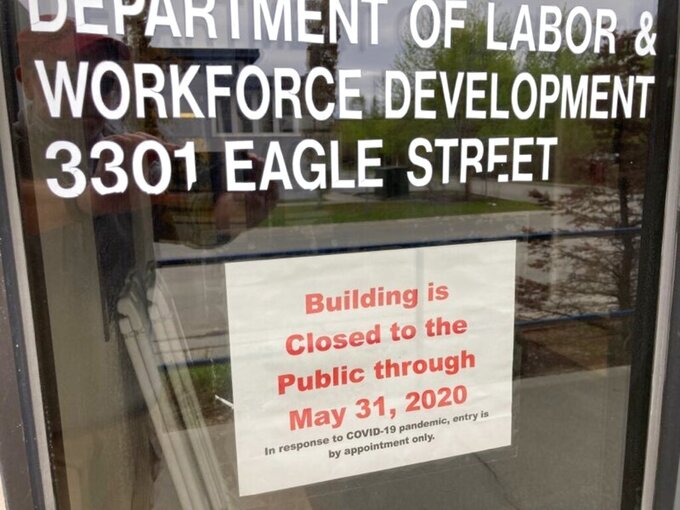 A sign on the door of the state labor department office in Anchorage, Alaska, on Friday, May 22, 2020, shows the office is closed to the public through the end of May. A report released by the department Friday showed the number of jobs in Alaska in April was down sharply compared to April 2019 amid coronavirus concerns. (AP Photo/Mark Thiessen)

JUNEAU, Alaska (AP) — Alaska had 42,200 fewer jobs in April than a year earlier as coronavirus fears shut down or disrupted businesses at a time when many traditionally would start adding jobs for the summer, the state labor department reported Friday.

As restrictions ease, some of the jobs will return, but many seasonal jobs won't happen this year, such as those serving cruise passengers, the report stated.

Nearly 540 Alaska voyages have been canceled, according to Cruise Lines International Association Alaska. Streets that normally would be bustling with tourists in places like Juneau have been eerily quiet.

The upheaval was widespread, though the labor department said some sectors were hit harder. The leisure and hospitality industry saw its April job numbers cut nearly in half compared with April 2019. Retail had an estimated 5,000 fewer jobs, and construction, 1,800 fewer.

Health care had 3,600 fewer jobs, according to the report. The state earlier this month allowed elective procedures, which it had previously ordered delayed, to resume with additional protocols aimed at guarding against the virus.

The federal government was the lone sector with more jobs than in April 2019, the department reported, attributing that to Census hiring.

Friday night brought the announcement of another blow to commerce and outdoor activity: The Alaska State Fair scheduled for August has been cancelled, the first time the event has been scrapped since World War II.

“We have now reached the point that with all the conjecture surrounding mandates and recommendations for mass gatherings of this scale, it just will not be possible to deliver the same experience fairgoers have come to expect from the State’s largest celebration," the fair's board of directors said in a statement. The board added that it plans to hold the fair in August 2021.

The April unemployment rate was 12.9%, compared with the national rate of 14.7%. It is the highest recorded rate for Alaska since reporting began in 1976, state labor department economist Karinne Wiebold said. The state's rate in March was 5.2%, a low.

But she said comparing the virus-related shock to an oil-price related economic downturn “is like comparing apples and oranges.” She said the last peak rate came during the 1980s oil-bust recession. Federal figures show unemployment as high as 11.2% in 1986.

Dan Robinson, chief of research and analysis for the state labor department, in a recent report cautioned against reading too much into Alaska's unemployment rate.

He said state and local rates are produced using models created by the federal Bureau of Labor Statistics that “struggle to capture short-term dramatic changes in the labor force, especially in small states with high seasonality like Alaska.”

Job estimates and unemployment claims could be more helpful in assessing the economy, he said.

Initial and continued unemployment claims, for the most recent reporting week, were sharply higher than a year ago.

Alaska has reported just over 400 cases of COVID-19, with 10 deaths. For most people, the coronavirus causes mild or moderate symptoms but for some, especially older adults and people with existing health problems, it can cause more severe illness and death.

Travis Smith, who co-owns two restaurants in Juneau, said he left town in December for a brief sabbatical after coming off what he called his “best year ever" in business. From afar, he said he watched as things fell apart “in a matter of weeks.”

The state in March ordered restaurants closed for dine-in services; drive-up, delivery and drive-through options remained. Though restaurants in late April were allowed to resume dine-in service with limits on capacity, Smith said from a business standpoint it didn't make sense.

His restaurant, The Rookery Cafe, has a long, narrow flow, and “you do have to do so much business to make these things make sense,” he said. It recently opened for takeout service.

On Friday, businesses in Alaska were allowed to fully reopen. State guidance says businesses should help individuals with “personal mitigation strategies,” such as encouraging face coverings, regular cleaning and finding ways for customers to keep distance from each other.

Anchorage Mayor Ethan Berkowitz said his city, Alaska's largest, would put in place rules, rather than guidelines, as it moves into the new phase starting Monday.

Berkowitz said rules would provide more comfort to customers and offer “a measure of liability protection for businesses that guidelines don't provide.”

Collette Costa, co-owner and manager of the Gold Town Nickelodeon in Juneau, said she has projects she wants to work on at her theater but also would be cautious about reopening. The theater has been doing drive-in screenings.

She said she doesn't know what the future will hold for her industry.