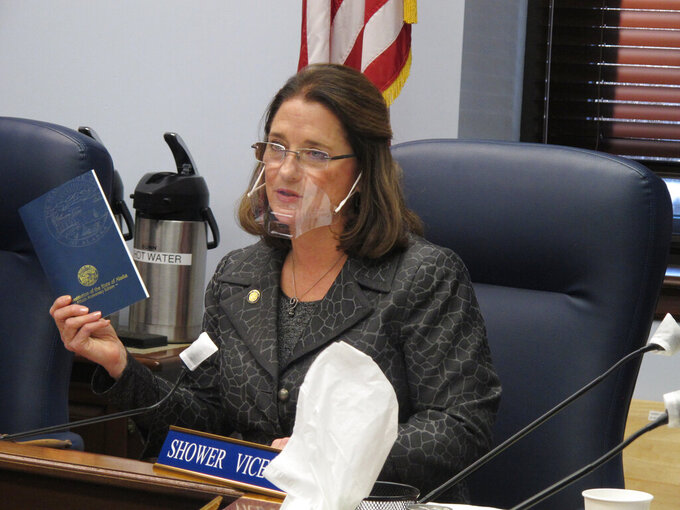 Alaska state Sen. Lora Reinbold, an Eagle River Republican, holds a copy of the Alaska Constitution during a committee hearing on Wednesday, Jan. 27, 2021, in Juneau, Alaska. Gov. Mike Dunleavy, a Republican, sent Reinbold a letter on Feb. 18, 2021, saying she has used her position to "misrepresent" the state's COVID-19 response. Reinbold said the letter was "full of baseless accusations and complaints." (AP Photo/Becky Bohrer)

JUNEAU, Alaska (AP) — Alaska Gov. Mike Dunleavy said his administration will no longer respond to or participate in hearings led by Sen. Lora Reinbold, telling the fellow Republican in a withering letter that she has used her position to “misrepresent” the state's COVID-19 response and that her demands for information have gone beyond checks and balances and are "not based in fact.”

“It is lamentable that the good citizens of Eagle River and Chugiak are deprived of meaningful representation by the actions of the person holding the office of Senator,” Dunleavy wrote in the letter dated Thursday. “I will not continue to subject the public resources of the State of Alaska to the mockery of a charade, disguised as public purpose.”

Reinbold has criticized the governor for issuing pandemic-related disaster declarations while the Legislature was not in session and taken aim at health restrictions imposed by local governments, airlines and the Legislature, including mask requirements. Dunleavy emphasized that he refused calls for a statewide mask mandate, seeing it as a local issue.

On social media, Reinbold has accused the Dunleavy administration of being “wild” about “these experimental” COVID-19 vaccines, “bragging over 100,000 have gotten them in Alaska" and characterized the administration as seeking disaster declarations to get mass vaccination clinics.

Health officials say the vaccines are safe and effective and no steps were skipped during the clinical trials.

Dunleavy wrote in the letter that his administration has coordinated with local governments, hospitals, businesses and volunteer groups “so that as many Alaskans as possible have access to the vaccine if they so wish.”

Alaska's disaster declaration recently expired after health and emergency officials warned lawmakers that a failure to extend it could restrict the state's ability to distribute vaccines and set back progress in combating COVID-19. The lapse came when the House had not filled committee assignments or most leadership positions and couldn't consider legislation, including a bill Dunleavy proposed to extend the disaster order.

Dunleavy's letter to Reinbold included footnotes, with many references to her Facebook posts.

Reinbold has had combative exchanges with the state health commissioner and as chairperson of the Senate Judiciary Committee she's held hearings highlighting testimony from people questioning the usefulness of masks and effects of government emergency orders. The pandemic has been a major focus for the committee, though it has no COVID-19-related legislation before it.

A post on Reinbold's Facebook page Thursday said the committee has had “incredible informative hearings fighting to protect constitutional rights."

Reinbold said in a statement Friday that Dunleavy's letter was “full of baseless accusations and complaints” about her role on the Judiciary Committee.

“I will never stop fighting for the rights of my constituents — and that includes asking tough questions of this administration when they overstep their bounds. The public expects and deserves a full audit of how they’ve exercised their broad emergency powers," she said.

Other states also have been wrestling with how much power governors should have to impose emergency restrictions during the pandemic.

Senate President Peter Micciche said the letter takes to the “next level” long-simmering tensions between Dunleavy and Reinbold, and his Republican-led majority takes the matter seriously. Micciche, a Republican, said he plans to speak with Reinbold and the governor's office and have his caucus discuss a path forward.

He said Reinbold has a “passionate heart. When she sees someone hurting, she internalizes that and she wants to help. And our job as the caucus is to help her to do that professionally, with credible information and to have a functional and effective committee."

Micciche said his goal going forward is that committees “take a balanced approach.”

“If you're not hearing from all sides of an issue, then the public is not getting all the information that they need to help support us in our decisions,” he said.

Senate Democratic Leader Tom Begich said he had never seen a letter quite like the one Dunleavy sent and that it's up to the Senate majority to decide how it will respond.

Begich said the lone Democrat on the committee, Sen. Jesse Kiehl, hasn't been able to voice his opinion as readily as minority members generally are allowed. Begich said a committee chair “sometimes has to entertain ideas other than their own."