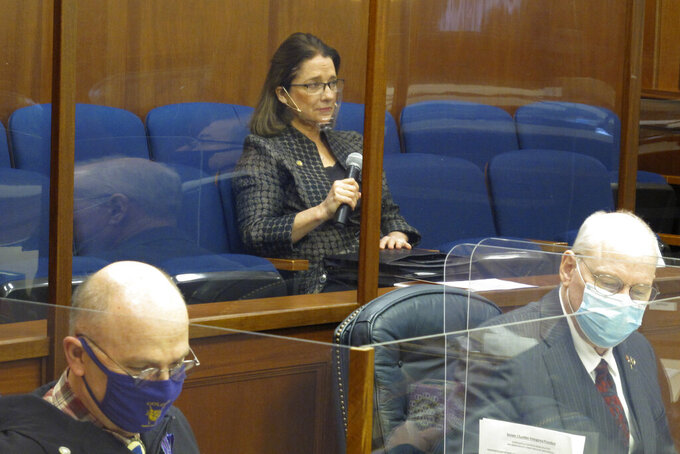 Alaska state Sen. Lora Reinbold sits in a Senate gallery on Friday, March 12, 2021, in Juneau, Alaska, with Sens. Click Bishop, left, and Bert Stedman, right, in the foreground. The Alaska Senate voted Wednesday to allow leadership to restrict access to the Capitol by Reinbold, an Eagle River Republican, over violations of protocols meant to guard against COVID-19. (AP Photo/Becky Bohrer, Pool)

JUNEAU, Alaska (AP) — Alaska state Sen. Lora Reinbold was allowed to participate in a floor session Friday after special accommodations were made for the Republican who legislative leaders say has refused to comply with protocols meant to guard against the spread of COVID-19 at the Capitol.

Before the session started, the chamber doors were closed, which is unusual, and the sergeant at arms stood in front. When Reinbold approached, holding her phone to record the interaction, she was directed to a visitors' gallery, where she sat alone. Roll, typically called with lawmakers pressing buttons at their desks, was called orally.

Two days earlier, senators voted to allow leadership to restrict access by Reinbold to the Capitol until she complies with rules aimed at curbing the spread of the coronavirus. Reinbold continued Friday to wear the type of clear face shield she has worn since the session started in January, which leaders say does not comply with the rules. She also said she was working from her Capitol office and showed up before the start of the Senate Judiciary Committee, which she chairs, before turning the gavel over to her vice chair and participating by video conference.

Senate President Peter Micciche said Wednesday Reinbold would be given access to a Senate gallery for floor sessions and be able to participate in hearings remotely. He said an “adequately equipped space” in another location would be found for her to work in what he said he hoped would be a temporary situation.

Daniel McDonald, Senate majority communications director, said by email Friday that leaders hoped to work with Reinbold “on a solution that has her following the rules. If that doesn’t happen, they have identified alternative office space outside the Capitol that she can use early next week.”

Micciche on Friday called the standoff a distraction and said “we’re moving past it one way or another. And my desire, of course, is to have Sen. Reinbold fully operating in the building, on our team, by simply testing and wearing a mask. So I’m going to hold out hope that that’s going to happen. If not, our business is going to continue.”

Senate Rules Chair Gary Stevens has said Reinbold also had not been following testing protocols or submitting to temperature checks and questions that are standard to be allowed into the Capitol.

Reinbold is a member of Micciche’s Republican-led Senate majority. During Friday's committee hearing, she said she was in the building but participating by video because of “new policies that I guess were just put in place that are still not very clear to me but I’m certainly trying to accommodate.”

On social media earlier this week, she said she does not like anyone “to be forced to disclose health issues or test results,” citing privacy considerations, and said she is taking stances to protect her constitutional rights and civil liberties.

Micciche has said the issue with Reinbold came to a head following COVID-19 cases associated with the Capitol, including a person close to him who he said was hospitalized with the illness. He said staff also had raised safety concerns.