Alaska's sole member in US House tests positive for COVID-19 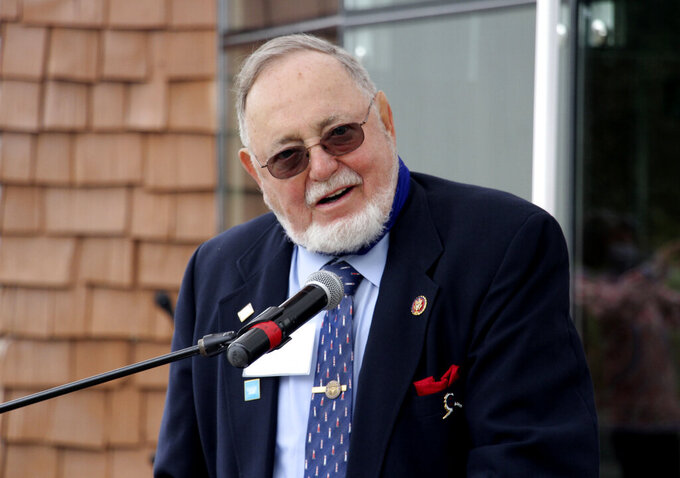 In this Aug. 26, 2020, photo, U.S. Rep. Don Young, an Alaska Republican, speaks during a ceremony in Anchorage, Alaska, celebrating the opening of a Lady Justice Task Force cold case office which will specialize in cases involving missing or murdered Indigenous women. Young announced Thursday, Nov. 12, 2020, on Twitter that he has tested positive for COVID-19. (AP Photo/Mark Thiessen)

ANCHORAGE, Alaska (AP) — U.S. Rep. Don Young announced Thursday that he has tested positive for COVID-19, a day after the 87-year-old won his 25th term in the U.S. House.

Young, the longest-ever Republican to serve in the House, made the announcement on Twitter.

“I am feeling strong, following proper protocols, working from home in Alaska and ask for privacy at this time,” Young wrote in a tweet. “May God Bless Alaska.”

A message sent to his spokesman wasn’t immediately returned.

“My friend and colleague Congressman Don Young is a fighter. I’m glad to hear he’s doing well and will be praying for his health and recovery, along with all those impacted by #COVID19,” Alaska's senior U.S. senator, Lisa Murkowski, said in a tweet.

The diagnosis came after Young initially downplayed the seriousness of the virus at the onset, claiming it was overblown and fueled by the media. Last March, Young spoke to a group of senior citizens, referring to the coronavirus as the “beer virus."

Young's positive test came after he was campaigning for re-election in Alaska, which is experiencing a surge of cases. Alaska has had over 20,000 cases, including 477 new cases reported Thursday. There have been 96 deaths.

It wasn't immediately known when or how Young contracted the virus. He did attend an election night party at his campaign in Anchorage on Nov. 3, even though the race wasn't decided until eight days later due to a large number of absentee votes that election officials did not start counting until Tuesday. He defeated Alyse Galvin, an independent who won the Democratic primary.

Alaska Gov. Mike Dunleavy, also a Republican, said in a video released Thursday that Alaska is facing an “escalating crisis.” He urged everyone during the next three weeks to work remotely if possible, have groceries and supplies delivered and to maintain a safe distance. If people cannot maintain six feet of separation, he encouraged them to wear masks but did not issue a statewide mask mandate.

Young was first elected in 1973, and is Alaska's sole representative in the House. Since he has the longest tenure of current members, he carries the ceremonial title of Dean of the House. It carries no official duties beyond swearing in the House speaker.

For most people, the coronavirus causes mild or moderate symptoms. For some, especially older adults and people with existing health problems, it can cause more severe illness and death.