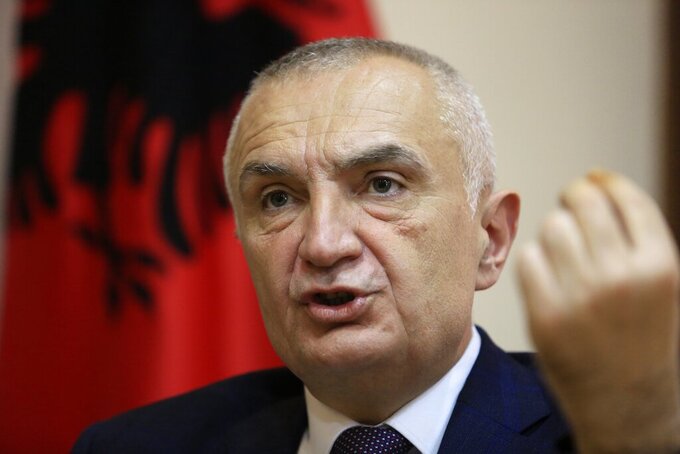 Albanian President Ilir Meta speaks during an interview with the Associated Press in Tirana, Albania, Wednesday, April 21, 2021. Albania’s president waded deep into the country's parliamentary election campaign Wednesday, accusing the left-wing government of running a “kleptocratic regime” and bungling its pandemic response. In an interview with The Associated Press, Ilir Meta also said he would step down if Prime Minister Edi Rama's Socialists — who are leading the main opposition conservatives in opinion polls — win Sunday's vote. (AP Photo/Hektor Pustina)

In an interview with The Associated Press, Ilir Meta also said he would step down if Prime Minister Edi Rama's Socialists — who are leading the main opposition conservatives in opinion polls — win Sunday's vote.

Meta's post is largely largely ceremonial, with some powers over matters concerning the judiciary and the armed forces. His role is also generally understood to be apolitical and the president is meant to be a symbol of the country’s unity. But he has often clashed with Rama's government.

“These are decisive elections that will indisputably consolidate Albania’s European future, which is in question, first of all, due to the current prime minister,” Meta told The AP. He proceeded to accuse Rama of running a “kleptocratic regime” and “an ugly copy" of Albania's former communist dictatorship.

Sunday’s vote will be decisive in electing the new government with which the European Union is expected to start accession talks — a long-awaited process in Tirana.

Irregularities have marred previous elections in post-communist Albania, and campaign tensions are high. The opposition conservatives have been boycotting parliament for the past two years to protest alleged government corruption.

Meta accused Rama of concentrating all legislative, administrative and judiciary powers in his hands.

Meta claimed that Rama's alleged control of the judiciary occurred despite substantial reforms undertaken five years ago with direct assistance from the United States and the EU — intended to remove corrupt judges and prosecutors.

The president also accused Rama of bad management of the COVID-19 pandemic. Albania officially has registered about 2,350 COVID-19 deaths.

The Socialists did not respond immediately to a request for comment on Meta’s remarks.

Meta started his political career with the Socialist Party, but later left it to form the smaller left-wing Socialist Movement for Integration, or LSI. In 2017, when he was elected president on a five-year term, he left the LSI leadership to his wife.

In his interview, Meta said that if Rama’s Socialists win “in a democratic way” a majority in the 140-seat parliament, he would resign.