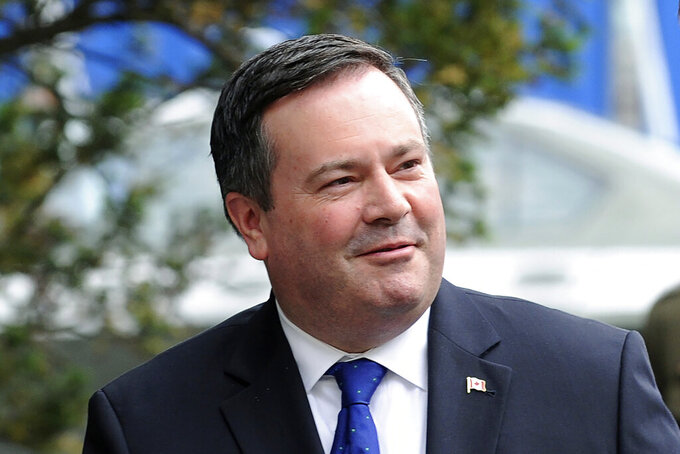 FILE - This June 9, 2015 file photo shows then-Canadian Defence Minister Jason Kenney in Warsaw, Poland. He is now the premier of Alberta. Alberta is investing $1.1 billion in the disputed Keystone XL pipeline, a project that Kenney says is crucial for the province's economy. (AP Photo/Alik Keplicz)

TORONTO (AP) — Alberta’s premier has reversed course and is now punishing members of his government for vacationing outside Canada despite government guidelines urging people to avoid nonessential travel during the pandemic.

Premier Jason Kenney said Monday he asked his chief of staff to resign and accepted the resignation of his Municipal Affairs minister. Several other members of his United Conservative party have also been demoted for travelling outside Canada.

Kenney said last week he would not punish members of his government after he said he learned of travel abroad by a number of people in his government.

“Over the weekend I have listened to Albertans who are sending a clear message that they want real consequences,” Kenney tweeted Monday.

Politicians travelling abroad for vacations during the pandemic became a big story in Canada last week after it became known that Ontario’s finance minister went to the luxury Caribbean island of St. Barts for weeks and seemingly tried to hide the fact by sending social media posts showing him in a sweater before a fireplace. Rod Phillips resigned last Thursday after being ordered home by Ontario's Conservative Premier.

“Senator Plett travelled to Mexico on December 28th, upon arrival he reflected on his decision to travel and immediately made arrangements to return home on December 31st,” a spokesperson said in an email.

Before he traveled, Plett posted a video message on twitter where he tells Canadians this Christmas will be different this year because “the pandemic has forced us to change some of those traditions, since we cannot travel and gather as we normally would.”

A spokesperson for Canada's Conservative leader said federal conservative party lawmakers were told not to travel before the holidays.

Chelsea Tucker also said two Conservative Members of Parliament, Ron Liepert and David Sweet, traveled to the United States. She said Liepert went to address an emergency repair with his property and Sweet also traveled to the United States for a property issue, but decided to stay in the U.S. for leisure without informing the party. She said the leader accepted Sweet's resignation as chair of a ethics committee.

Two federal government Liberals also visited the U.S., one for a memorial service and another to visit a ailing relative. Both stepped own from certain roles.

Opposition parties in Alberta called for the resignation of Municipal Affairs Minister Tracy Allard after it was reported Thursday that she was in Hawaii over the holidays. Jamie Huckabay, Kenney’s chief of staff, travelled to the United Kingdom with his family before Christmas.