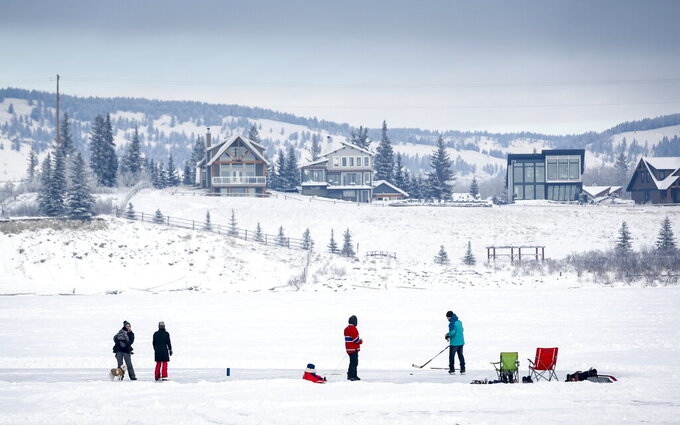 A family skates on a cleared area of ice on Ghost Lake Reservoir near Cochrane, Alberta, Canada, Sunday, Dec. 27, 2020, amid a worldwide COVID-19 pandemic. (Jeff McIntosh/The Canadian Press via AP)

EDMONTON, Alberta (AP) — The premier of Canada’s western province of Alberta said he will not punish members of his government for vacationing outside Canada despite government guidelines urging people to avoid nonessential travel.

Alberta Premier Jason Kenney said he learned this week of travel abroad by a “few” legislature members, senior staff and officials with the United Conservative government, including his municipal affairs minister and his chief of staff.

Kenney said he made an error by not issuing a clear directive earlier urging them to remain in the country due to the COVID-19 pandemic. He said those in public positions should be held to a higher standard in their personal conduct but said he won’t sanction them.

Politicians travelling abroad for vacations during the pandemic became a big story in Canada this week after it became known that Ontario's finance minister went to the luxury Caribbean island of St. Barts for weeks and seemingly tried to hide the fact by sending social media posts showing him in a sweater before a fireplace. Rod Phillips resigned Thursday after being ordered home by Ontario Conservative Premier Doug Ford.

But in Alberta, Kenney declined to sanction members of his party.

At least one top health official said he's had enough.

“I'm fed up with politicians who just don't care," said Dr. Andrew Morris, a professor of infectious diseases at the University of Toronto and the medical director of the Antimicrobial Stewardship Program at Sinai-University Health Network.

“And the public needs to be fed up as well.”

Kenney said he has now ordered all Cabinet ministers and senior government officials not to vacation outside Canada after learning of multiple recent trips by party officials and employees.

“We should be here at home, plain and simple, if we carry a position of public trust,” Kenney said.

Opposition parties called for the resignation of Municipal Affairs Minister Tracy Allard after it was reported Thursday that he was in Hawaii over the holidays. Kenney said Allard, the legislature member for Grande Prairie who is also responsible for emergency preparedness, left for the United States on Dec. 19 and continued to work while away. He said he learned of her trip Tuesday and asked her to return.

Kenney said Allard apologized for her lack in judgment over the trip abroad.

Kenney also said Jamie Huckabay, his chief of staff, travelled to the United Kingdom with his family before Christmas. After learning of the COVID-19 variant in the U.K., Huckabay changed his travel plans and returned to Alberta on Dec. 26, the premier said.