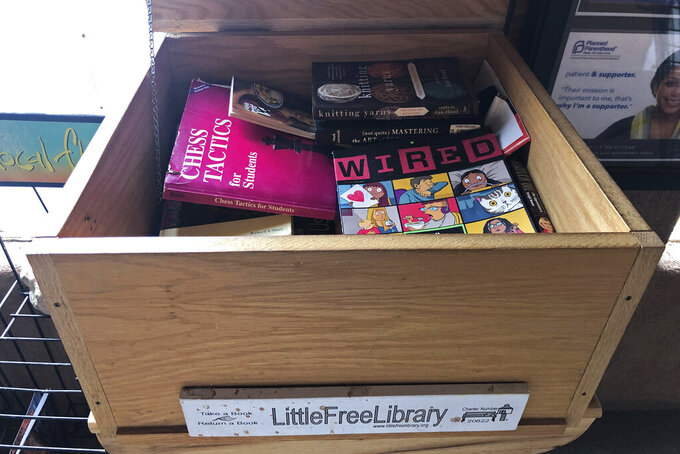 In this April 21, 2020, photo, a full little free library sits outside of a grocery store in Placitas, N.M. Across the United States, volunteers are reporting a jump in usages of official and unofficial tiny popups known as little free libraries as readers look to pass the time amid COVID-19 health restriction. From the American Southwest to New England, little free libraries made of wood or brick, placed in front of parks or in the trunk of a car, have seen their small spaces overwhelmed with books. (AP Photo/Russell Contreras) 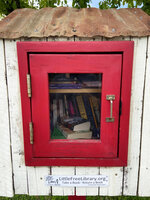 RIO RANCHO, N.M. (AP) — The city of Albuquerque and a Wisconsin-based group have agreed on a new initiative to encourage residents to build “Little Free Libraries” throughout the region as public libraries and bookstores remain under restrictions due to the pandemic.

Under the agreement, the city’s Office of Civic Engagement’s​ ​One ABQ Volunteers​ program will work to expand the number of free libraries across the city.

The city’s public libraries recently reopened but during limited hours.

“We are honored to engage with the city in this way, and we are excited to see how the landscape of this community changes with a focused effort around building community and creating greater book access,” said Little Free Library Director of Programs Shelby King. “One book-sharing box at a time — that’s all it takes to have an impact.”

Across the United States, volunteers are reporting a jump in little free libraries as readers look to pass the time. Made of wood or brick, and placed in front of parks or in the trunk of a car, the libraries have seen their small spaces overwhelmed with books because of the novel coronavirus.

“For years, we’ve been fortunate to have community members build their own Little Free Libraries,” she said. “Over the last few months, in particular, we’ve seen how they can maintain a love of reading in kids when schools and libraries are closed and serve as a powerful way for communities to connect and share with each other from a distance during the coronavirus pandemic.”

Associated Press writer Russell Contreras is a member of the AP’s Race and Ethnicity team. Follow Contreras on Twitter at http://twitter.com/russcontreras