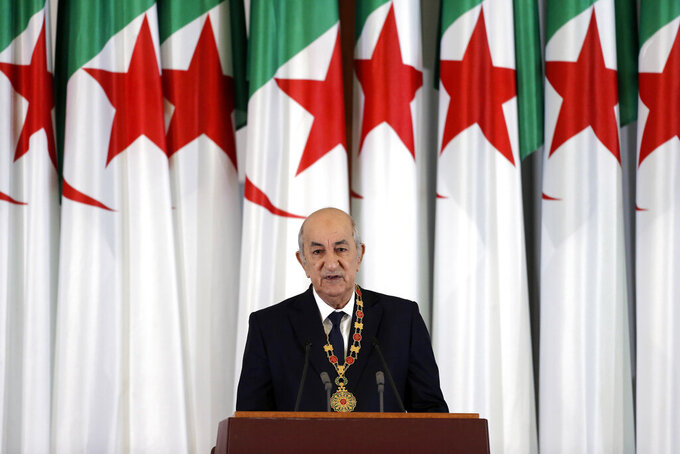 FILE - In this Thursday, Dec. 19, 2019 file photo, Algerian president Abdelmadjid Tebboune delivers a speech during an inauguration ceremony in the presidential palace, in Algiers, Algeria. Tebboune has been transferred to Germany for specialist medical treatment a day after his country’s presidency announced he had been hospitalized but not revealed why. Several senior officials in the 75-year-old president’s entourage developed COVID-19 symptoms on Saturday, Oct. 24, 2020 and the president was placed in what the government called “voluntary preventive confinement.” (AP Photo/Toufik Doudou, FILE)

ALGIERS, Algeria (AP) — Algerian President Abdelmadjid Tebboune has finished his treatment for COVID-19 in an undisclosed location in Germany, and is undergoing medical tests, his office said Sunday.

Amid growing concern in Algeria about the 74-year-old president’s health, his office issued a statement Sunday saying: “The medical team accompanying him confirms that the president has completed the recommended treatment protocol after having contracted COVID-19, and is currently undergoing medical tests.”

The statement didn't provide details about his condition or his location, or indicate when Tebboune might return to Algeria.

Tebboune was sent to an Algerian military hospital last month and then transferred to Germany in a special medical plane on Oct. 28. His office initially didn't explain the reason for the move, but confirmed a week later that he had the virus.

Prior to his hospitalization, several senior officials in the president’s entourage had developed COVID-19 symptoms, and Tebboune had been placed in what the government called “voluntary preventive confinement.”

Tebboune was elected in December to replace longtime leader Abdelaziz Bouteflika, who was pushed out of office by pro-democracy protesters backed by the powerful army chief.

Algeria has reported 2,139 virus-related deaths and more than 66,000 infections.