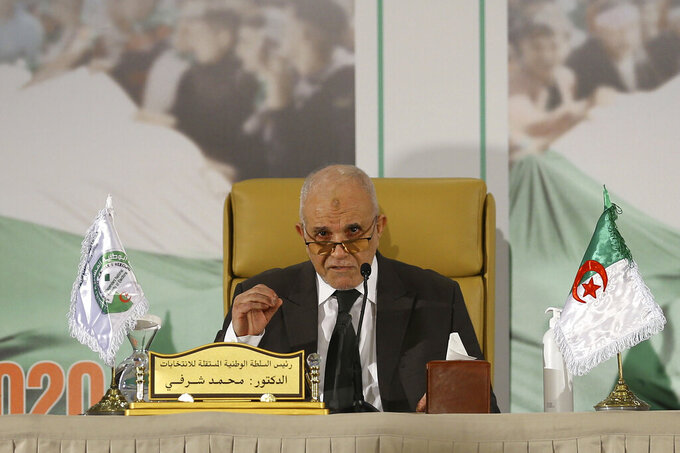 Mohamed Charfi , head of the Algerian Elections National Authority announces the results of the referendum in Algiers, Monday, Nov.2, 2020. Algerians have approved a  revised constitution that imposes term limits and is aimed at answering demands from pro-democracy protesters who pushed out the president last year. (AP Photo/Anis Belghoul)

ALGIERS, Algeria (AP) — Algeria's electoral commission said Monday that a large majority of voters approved a revised constitution that imposes term limits and promises new freedoms. But turnout was low, and the opposition boycotted the vote.

The electoral commission head, Mohamed Charfi, said in a news conference that 66.8% of voters supported the changes, with 33.2% against.

But fewer than one out of four registered voters went to the polls in Algeria’s lower-ever turnout. Charfi said that the turnout of 23.7% was largely due to the coronavirus pandemic.

The virus is linked to at least 1,973 deaths in Algeria and has infected more than 57,000 people.

Opponents had called for a boycott, saying they were barred from campaign venues or from expressing their views on public television or radio.

Charfi said the new constitution is legitimate, despite the problems.

Pro-democracy activists say the revised charter doesn’t go far enough to open up politics to a new generation of leaders. Islamist parties say it doesn’t do enough to promote Islam and the Arabic language, and oppose a measure on religious freedom.

The revision of the constitution was among promises that President Abdelmadjid Tebboune made when he was elected in December. It limits presidents and parliament members to two terms, makes it easier to create political parties, and hands some presidential powers to the prime minister, among other changes.

It would also allow the Algerian military to intervene abroad, in United Nations or African Union peacekeeping operations, a major departure from the current doctrine of non-interference.

Meanwhile, Tebboune is hospitalized in Germany after several people in his administration showed symptoms of the virus. The 74-year-old’s health condition and whereabouts are unclear.

Speaking on behalf of the U.S. government, principal deputy spokesperson Cale Brown wished him “a speedy and full recovery” in a statement on Monday. "President Tebboune is a friend of the United States, and our relationship is one that is based on mutual respect and shared commitment to regional stability and prosperity," he said.