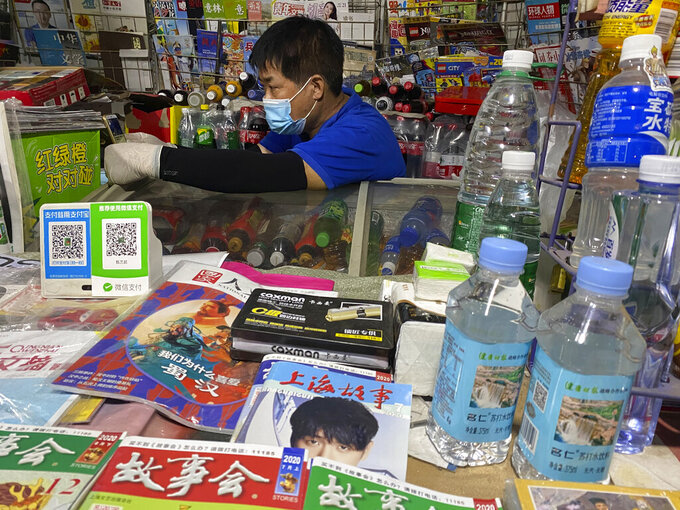 A news-stand vendor, wearing a mask to protect against the coronavirus, sits near QR codes for Alipay and WeChat, two popular online payment system in Beijing, China on Tuesday, July 21, 2020. Ant Group, the financial technology arm of e-commerce giant Alibaba Group, on Tuesday, Aug. 25, 2020, filed for a dual-listing in Hong Kong and Shanghai, in what would likely be the world’s largest initial public stock offering since the coronavirus pandemic began. (AP Photo/Ng Han Guan, File)

HONG KONG (AP) — Ant Group, the financial technology arm of Chinese e-commerce giant Alibaba Group, on Tuesday filed for a dual listing in Hong Kong and Shanghai, in what may be the largest share offering since the coronavirus pandemic began.

The initial public offering will be the first dual listing on the Hong Kong exchange and Shanghai’s STAR Market. The company's filing did not disclose the timetable for its public offering or how much money it hopes to raise.

Ant Group operates Alipay, one of China’s two dominant online payments services. Over a billion users use Alipay to pay for purchases both online and in stores, to send money to friends and to pay bills. In the 12 months that ended in June, Ant Group tallied 118 trillion yuan ($17 trillion) in transaction volume.

In the filing, Ant Group said it plans to use the funds raised from the listing to expand its service offerings, invest in research and development, and to expand its payments business internationally.

Ant Group was valued at $150 billion in a private fundraising round in 2018, making it the most valuable startup company in the world.

The company also runs one of the world’s largest money market funds as well as Zhima Credit, a private credit rating system for its users.

This story corrects the name of credit rating system to Zhima Credit instead of Sesame Credit.