All Blacks, France to renew rivalry at the Rugby World Cup 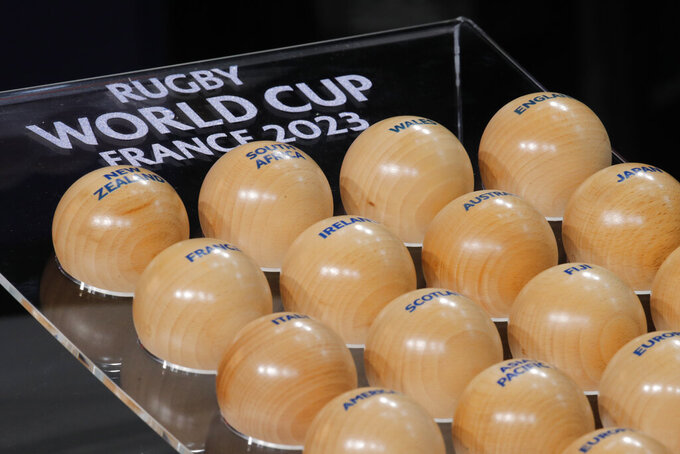 Wooden balls representing countries and classified by pools are pictured after the draw for the Rugby World Cup 2023, Monday, Dec. 14, 2020 in Paris. Three-time champion New Zealand will renew its rivalry with host nation France after being drawn into the same pool for the 2023 Rugby World Cup. The 10th edition of the World Cup will be the second to be hosted by France and will run from 8th September to 21st October. (AP Photo/Christophe Ena)

New Zealand and France have combined to deliver some of the most storied matches in the history of the Rugby World Cup.

The next could come on the September opening night of the 2023 tournament.

The draw for the pool stage of the next World Cup threw up some familiar matchups on Monday, including the three-time champion All Blacks being placed in the same five-team pool as host nation France.

A New Zealand-France game evokes so many memories — the 1987 and 2011 finals, both won by the All Blacks; the dramatic ‘99 semifinal and ’07 quarterfinal, both won by Les Tricolores.

Inside the Palais Brongniart in Paris, there were gasps when the teams were paired again at the draw.

The match schedule will be finalized in February, following consultation with French team officials, but France coach Fabien Galthie wants his team to meet New Zealand in the first game.

“Why not?” Galthie said. “They’re a beautiful team. Everyone in rugby loves New Zealand, the All Blacks. It would be so exciting.”

There was added poignancy in the teams being drawn together just weeks after the death of former France winger Christophe Dominici, whose brilliant try helped turn the tide against the All Blacks in their classic semifinal at Twickenham 21 years ago.

New Zealand has never lost a pool match at a Rugby World Cup. France should benefit from playing at home, and is on the rise with one of the most talented young squads in the international game.

None of that bodes well for Italy, which was drawn into the same pool, with the All Blacks for a record seventh time. But they never played their pool match in 2019 in Japan because of a typhoon.

Like with New Zealand and France, Wales and Australia have met a record-tying seven times in the tournament and they were pitted together again in Pool C in what appeared to be the toughest group. That’s because the ever-dangerous Fiji was the third seed in the pool.

The last time the World Cup was hosted by France, in 2007, Fiji beat Wales 38-34 in a decisive and classic pool finale in Nantes. The teams will meet in a fourth successive World Cup pool since then.

Defending champion South Africa will face Ireland and Scotland in Pool B.

“We saw last year the margin for error — even during the pool stages — at any Rugby World Cup is very small,” Springboks coach Jacques Nienaber said. “Take for instance our situation where we simply had to win every single pool game after our loss to the All Blacks in Japan, to ensure we qualify for the knockout stages.”

England, Japan and Argentina were placed in Pool D. That will see England coach Eddie Jones take on a Japanese team with whom he masterminded the most stunning upset in the tournament’s history, when Japan beat South Africa 34-32 in 2015. Jones’ mother is Japanese-American, too.

So, will it be an emotional occasion for Jones?

“I wouldn't think so,” Jones said, laughing along with Japan coach Jamie Joseph on a video call. "Jamie doesn't need any of my emotions. But it was great watching the highlights of past World Cups and seeing the number of edits of Japan triumphs at the World Cup.

“They play the game differently and we don't get many chances to play against teams like Japan.”

Argentina failed to get out of its pool at last year's World Cup, but gave a reminder of its qualities by beating New Zealand 25-15 last month for its first win over the All Blacks and having two draws with Australia.

“It's probably the most contrasting pool in terms of style and philosophy of play,” Jones said. “That's what makes it so interesting.”

The remaining eight qualifiers — two for each pool — will be known by November 2022, less than a year before the tournament, following a regional qualification process. At least two will come each from the Americas and Europe, as well as one each from Oceania, Africa and the Asia-Pacific region.

The seedings for the draw were based on the world rankings at the start of 2020 because some teams, including South Africa and Japan, haven’t played in 2020 because of the coronavirus pandemic.

France would have been among the first seeds on current form, with Galthie having rejuvenated Les Tricolores — who are ranked No. 4 — since taking over as coach after the 2019 World Cup in Japan.

“We have watched with admiration the way they are rebuilding the team,” All Blacks coach Ian Foster said. “They are building something special for 2023. For us to know the size of the challenge now has given us a clear focus and one we can’t wait for.”

The top two teams in each pool advance to the quarterfinals. And the draw set up a possible quarterfinal between South Africa and either New Zealand or France, and potentially England against Wales or Argentina.

The 10th Rugby World Cup will be the second hosted by France. It will be staged in nine cities and run from Sept. 8 to Oct. 21.

French President Emmanuel Macron attended the draw and said his country promises to bring “French knowhow and savoir-faire" to the event.