All ears: Magic will decompress, then make future plans 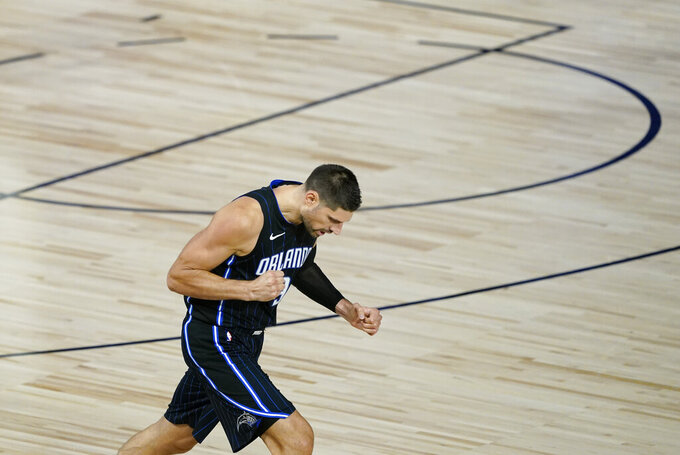 LAKE BUENA VISTA, Fla. (AP) — Orlando coach Steve Clifford proudly displayed a pair of personalized Mickey Mouse ears inside his home office Monday, saying they would be one of the gifts from this season that he would cherish the most.

It’s safe to say they weren’t on his wish list when this season started.

The world has been turned upside down by the coronavirus pandemic, which forced the NBA into a bubble at Walt Disney World to resume the season — and now that the Magic are out of the bubble, they have no real idea what comes next.

So, for now, there’s no concrete plans to be made for the 2020-21 season. That’ll come in time, but Clifford intends to spend the immediate future going over what went right and wrong after a season in which Orlando made the playoffs for a second consecutive year but couldn’t get past the first round.

“I think what it does is it makes us more relevant again,” Clifford said. “First of all, making the playoffs is never an easy thing. You can’t take it for granted. ... So, it’s a step. And yet, look, when you’re a coach, I’m not naive. You’ve got to win in the playoffs. You have to have playoff success. And I understand that our guys understand that. And ultimately, just getting there isn’t going to be enough.”

Progress has clearly been made in Clifford’s two seasons. Nikola Vucevic is an All-Star and Orlando has him locked up for the immediate future. Terrence Ross is a pure scorer, Aaron Gordon still has levels that he can get to and the Magic did what not everyone thought was possible by resurrecting Markelle Fultz’s career this season.

Magic President Jeff Weltman said the silver lining to the uncertainty is it gives the team a chance to decompress after nearly two months in the bubble and a season that essentially lasted for 11 months.

“The timing and the way things are going to work, even to the point of what are summer workouts going to look like for our players in our facility, you know these things are all very much TBD,” Weltman said. “We’ll just have to kind of roll with the punches.”

Among the issues facing the Magic this offseason:

Even though nobody knows when next season will begin or end, the Magic seem certain that Jonathan Isaac — who missed much of this season with a knee injury, then endured a much more severe injury in the bubble — will not play. “Obviously, we will not have Jonathan Isaac next season so that has to account into our thinking,” Weltman said.

There will be decisions to make whether to pursue retaining DJ Augustin and Michael Carter-Williams, and Evan Fournier has a $17 million option — it would seem likely that he’d exercise that option, given the financial uncertainties around the league right now and the indications that long-term contracts won’t be handed out easily this offseason. James Ennis also has a player option and it's believed the Magic would want him back. The core of Vucevic, Gordon and Ross is under contract, as is Fultz, who has greatly impressed Clifford with his growth.

Getting into the playoffs for a second consecutive season is obviously a positive step. Any team coached by Clifford is going to play defense, and the Magic this season fit the bill. The Magic allowed 108.3 points per game, fifth-best in the NBA behind only Toronto, Boston, Indiana and the Los Angeles Lakers.

The 3-pointer is essential now, and the Magic — who, in fairness, made great offensive strides as the season went along — ranked 25th out of 30 teams at 34.3%. (Overall, they were 26th in field goal shooting at 44.4%.) Clifford said he’d like to see Vucevic become a 38% to 39% shooter from long range, noting that would give Orlando a very different dynamic. Vucevic shot 34% on 3s this season.

For now, Orlando holds the No. 15 and No. 45 picks in the draft. Not having someone with all the signs of becoming an elite defender like Isaac for next season cannot be understated; the Magic considered him a huge part of their future, and still hope that is the case. It’s a reasonable expectation to think Orlando will look to add at least one wing this offseason; Augustin’s free agency decision will also determine if another point guard is needed.