All Maryland hospitals set to get vaccine within 2 weeks 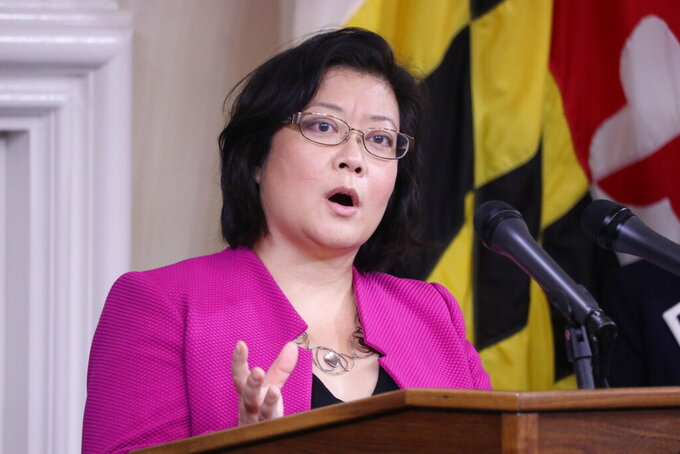 ANNAPOLIS, Md. (AP) — All Maryland hospitals are expected to receive some COVID-19 vaccines in the next two weeks to begin vaccinating critical frontline staff, a state health official said Tuesday.

Dr. Jinlene Chan, Maryland’s acting deputy health secretary, said nursing homes also will begin vaccinations within the next two weeks. The University of Maryland Medical Center was the first hospital in Maryland to receive the Pfizer vaccine on Monday.

“With vaccine distribution now beginning in our state, we have finally reached a turning point and we are able to see the sun rising on the horizon even if that horizon may still seem a little bit distant right now," Gov. Larry Hogan said at a news conference.

Maryland is set to receive 155,000 doses of the Pfizer and Moderna vaccines initially. Chan said Maryland could receive up to 300,000 vaccine doses by the end of this month. She said the availability could change from week to week.

Chan also said the focus will be on vaccinating health care workers, residents of nursing homes and first responders in the initial phase, as recommended by federal government.

“We anticipate that with ongoing allocations to the state, we will be able to expand further to include people in high-risk categories — those who are at risk of complications from COVID-19 disease," Chan said.

The governor said he is reactivating the Maryland National Guard in order to provide logistical support to help state health officials during the initial vaccine distribution.

Hogan also announced that the state has used all 500,000 COVID-19 tests that the state acquired from a South Korean company. The governor also said the company, LabGenomics, has announced a separate agreement with Frederick-based lab CIAN Diagnostics to acquire 1 million more tests. Hogan said the state was not involved in the deal, and no state money was spent on the additional tests.

The initial 500,000 tests, which were purchased in April in a deal announced with much fanfare for about $9.5 million when states were scrambling to locate tests, has prompted questions and criticism from state lawmakers. Critics have focused on swapping out the initial batch of tests for another 500,000 at an additional cost of about $2.5 million that was paid quietly.

Hogan has said the swap was necessary because of inconsistencies between the initial test kits and the Food and Drug Administration’s emergency use authorization. The governor defended the tests again Tuesday.

“We used them every single day at our community-based testing sites, as well as for our nursing homes, congregate care settings, clusters, outbreaks and hotspots all across the state,” said Hogan, a Republican.

Maryland has confirmed a total of 239,362 cases of COVID-19 during the pandemic, an increase of 2,401 from the previous day. Maryland has had 5,039 deaths, 61 more than on Monday. The state currently has 1,799 people hospitalized with the virus. Maryland has conducted about 5.1 million COVID-19 tests.